If you watched the webcast of the Dubai Marathon on Thursday night (and you should have because it is the only “major” marathon on in primetime in the United States), then you are very familiar with Jumeirah Beach Road. Over the two hours, you became well acquainted with this well paved street adjacent to the Persian Gulf and its palm trees that lined the median.

If Boston or New York is the Mt. SAC of marathon courses then Dubai is like running around the parking lot of a strip mall four times and calling it a cross country race. The commentator on the webcast was so startled by the second turn in the race that he thought the lead woman was dropping out of the race when she veered left.

It’s not aesthetically pleasing, but the $200,000 prize for first place always attracts a deep field to Dubai. I just wish they could use some of that money to build a hill or two. There was a raucous, largely Ethiopian crowd at the finish line, yet most of the course was eerily quiet. Love silence….Hate turns….then this is the perfect marathon for you.

The race itself followed a familiar pattern. Dubai is famous for taking an anonymous Ethiopian and thrusting him into the upper echelons of elite marathoning. This time it was Lemi Berhanu Hayle, who chopped over five minutes off his personal best to win the race in 2:05:28. He broke away from Lelisa Desisa with about 1,000 meters remaining after the fast earlier paced slowed considerably in the final miles.

The lead group of almost 30 runners (rabbits included) passed the halfway mark in 1:02:02. Kenenisa Bekele, the pre-race sort of favorite, blended into the pack and the palm trees for almost 90 minutes before sputtering and eventually dropping out.

With the camera focused on the last throes of Bekele’s race, we didn’t see much of the leaders. They did return in time to capture the final stretch run between Desisa and Hayle. As Hayle passed the 423th palm tree (I was counting), he cruised past Desisa and his margin grew to 24 seconds by the finish line. Desisa, for the second marathon in a row, finished runner-up. He looked taxed at the finish (who doesn’t after a marathon?) and now has to turn his attention to the Boston Marathon. I’m sure Meb Keflezighi and the others who will face him in April didn’t mind that he was put through the ringer.

Speaking of back-to-back marathons, where does Kenenisa Bekele go from here? He reportedly dropped out due to injury. Obviously, that doesn’t bode well for his chances of making it to the starting line 11 weeks from now in London.

Any positives? He didn’t go the full 26 miles. Maybe he left something in his legs, but getting dropped at virtually the same spot in consecutive races leaves some psychological scarring.

Because of Bekele and the finish of the men’s race, there was large gaps of coverage in the women’s race. Tigist Tufa ran solo at the front of the women’s field virtually the entire race.

She’d tried this strategy before, most famously in New York City when she and Buzunesh Deba had a three minute lead on the chase pack in 2013 before Priscah Jeptoo devoured the entire field. In Dubai, Aselefech Mergia, Gladys Cherono and Lucy Kabuu all flew by her and immediately shut the door on any comeback attempt.

Mergia and Cherono separated from Kabuu before the fourth (and final!) turn. From there, the two stuck together before Mergia inched ahead. She finished in 2:20:02 with Cherono only one second behind. 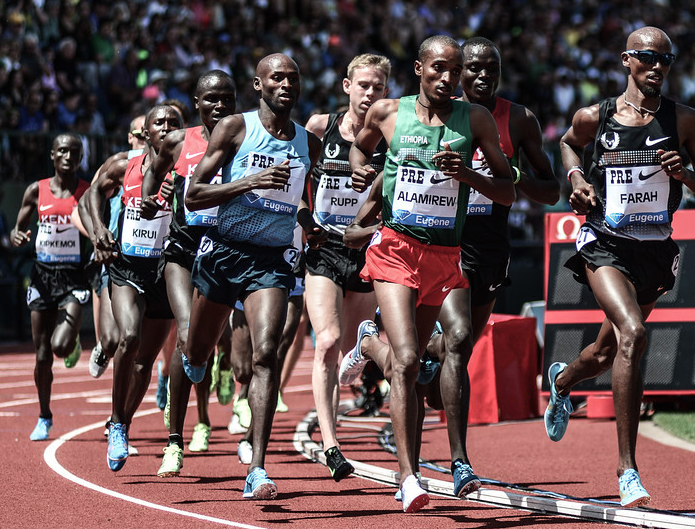 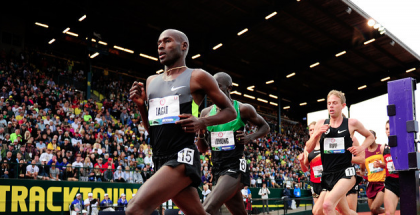