The NCAA Indoor Championships start today and finish tomorrow. They’re one of the best meets to watch because so much happens in such a short period of time, and nearly everything that happens is important in one way or another. Just like the adventures of Adam West and Burt Ward used to be, it’s a tight little two-day action-packed story with a cliffhanger wait in between.

Since there is so much action going on, we’re just giving you a quick-and-dirty fan’s guide to the action.

The meet is taking place on Friday and Saturday evenings at Texas A&M’s Gilliam Indoor Track Stadium. You can watch the meet live via ESPN3.com (provided you are a cable subscriber) and can follow the live results at FlashResults.com. The USTFCCCA’s website has a whole bunch of other interesting links to follow.

Who are the team favorites?

The USTFCCCA’s computer rankings are based on “national championships scoring potential” and have a history of accuracy.

The association first started its rankings in 2008, giving us 18 indoor championship meets it has predicted (9 each for men and women). The team championship is the most important prize, but the NCAA also gives out trophies to the 2nd, 3rd, and 4th place teams. Here’s how the ranking results break down.

The above strongly suggests that the top six teams in the USTFCCCA rankings are the ones to watch. They are:

Those top six teams above are noted in the visual schedule below. For example, you can see that the women’s 60 meter semifinals are a big event in the team competition while the women’s shot put is not. (The red A on a white background is Arkansas, the gray A on a scarlet background is Alabama.) 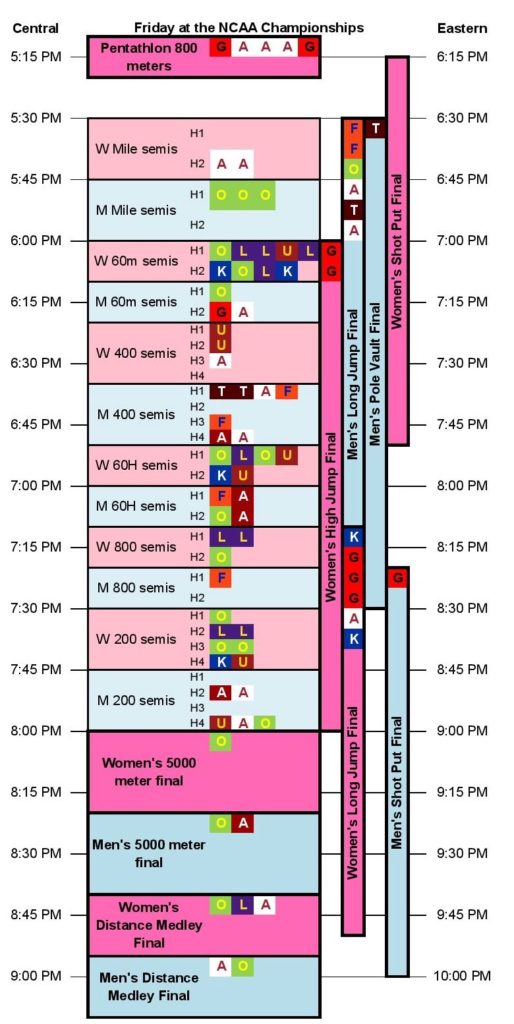 Athletes on the Bowerman Award watch list are marked with an asterisk.*

Pentathlon: The multi-events, the men’s heptathlon and women’s pentathlon, will be ongoing all day and following them is a fun way to kill time on a Friday afternoon at work. The pentathlon will be coming to its conclusion right after the whistle blows and Fred yells “Yabba dabba doo!”.

The basics are this: Kendal Williams* (Georgia) is heavily favored to win. If Arkansas is going to have any shot at the women’s team title, they’re going to have to score big.

Women’s Mile semis: Kaela Edwards* (Oklahoma State) is the favorite, Arkansas is trying to get two to the final. Let’s Run has a deep preview.

Men’s Mile semis: Edward Cheserek* (Oregon) might be running three races today, this is the first. He’ll be trying to drag two teammates to the final. Other than Ches, this is a pretty wide-open event. Let’s Run has a deep preview.

Women’s 60 semis: Hannah Cunliffe* (Oregon) broke the collegiate record earlier this year. There are nine qualifiers from teams contending for the title and/or a trophy but only eight will get to the final.

Men’s 60 semis: Christian Coleman* (Tennessee) and Kendall Williams (Georgia) are the favorites. It would be a surprise if Oregon’s Kyree King made the final.

Women’s 400 semis: There is no real favorite in this race.

Men’s Long Jump: The men’s long jump should be entering its final rounds somewhere around this point, and it will play a massive part in determining the team champion.

Women’s 60 hurdle semis: Sasha Wallace* (Oregon) is the favorite, although Jasmine Camacho-Quinn (Kentucky) is the reigning NCAA champion in the outdoor 100 hurdles. The unpredictable nature of the hurdles means the Oregon Ducks could give themselves a big leg up in the team competition or leave the door open for challengers.

Men’s 800 semis: I love semis in the 800, they are madness. Emmanuel Korir* (UTEP) briefly held the 600 meter world record two months ago, while Craig Engels (Ole Miss) is coming back from injury. Let’s Run has a deeper look.

Men’s Pole Vault: Chris Nilsen* (South Dakota) is the favorite but this is among the most fickle of events.

Women’s 200 semis: Oregon has unparalleled depth in this event with Hannah Cunliffe* and Ariana Washington*.

Men’s 200 semis: Alabama has a new find in Jereem Richards, but Christian Coleman* (Tennessee) is the one with experience.

Women’s High Jump: This event should be reaching its conclusion around the time the distance finals begin. Georgia has the top two entries.

Men’s 5000 meter final: Edward Cheserek* (Oregon) is the heavy favorite, but the real questions will be sorted out after this race.

Women’s Long Jump: This event should be wrapping up somewhere during the 5ks or DMRs. Shakeela Saunders* (Kentucky) is the favorite, and just like in the men’s long jump, this event will play a large role in which teams grab which trophies.

Women’s Distance Medley Final: Oregon broke the collegiate record last month, while Arkansas and LSU are looking to max out on points.

Men’s Distance Medley Final: Will Edward Chesarek* (Oregon) double back from the 5000 like he did last year? Can anyone beat Oregon if he does? Will Oregon get enough points to challenge for the championship? And will it kill Ches’ legs if he tries? As Desmond Doomsday used to tell us, “Answers…tomorrow night! Same Bat-time! Same Bat-Channel!”