The serious pro season kicks off in Kingston on Saturday night.

We’ve had indoor season already, which for pros is kind of like preseason track. We’ve had all the early season meets like the Florida Relays and Mt. SAC Relays and the like, which are basically scrimmages for the pros. We’ve had the Penn Relays and World Relays, which are like the all-star game (except that both athletes and fans care who wins). The invitational portion of the Drake Relays stands out as the only true professional competition yet this year.

That changes this week. The IAAF’s World Challenge, the “Serie B” tour of single-day invitationals, gets going with the Jamaica International Invitational on Saturday and the Seiko Golden Grand Prix on Sunday. Those are just two of the many competitions taking place over the next few days.

Here are the fifteen matches you should be watching this weekend.

Williams-Mills vs McCorory vs Richards-Ross

By any estimation, these are the three best women’s quarter-milers in the world right now. Novlene Williams-Mills (Jamaica) is #1 in the All-Athletics World Rankings, Sanya Richards-Ross (USA/Nike) posted the fastest split at last week’s World Relays, and Francina McCorory (USA/adidas) beat both of the above at the Drake Relays.

LaShawn Merritt (USA/Nike) posted his worst result in years at the Drake Relays, where he finished a well-beaten fifth. While he did a fine job in anchoring the USA to a 4×400 win in the World Relays last week, he ran 44.72 for his leg while Javon Francis (Jamaica) ran 44.01 in the heats and 44.00 in the final. Merritt will have to be on the top of his game to pull out a win.

Jamaica is missing its biggest sprint stars–Usain Bolt, Yohan Blake, and Veronica Campbell-Brown–but pretty much everyone else of importance will be at the JII, including all of the top American stars. Ryan Bailey (USA/Nike) stirred the pot at the World Relays and controversy always surrounds Justin Gatlin (USA/Nike); they’ll run the 100 against the likes of Asafa Powell and Nesta Carter (both Jamaica), while Tyson Gay (USA) will run the 200. Shelly-Ann Fraser-Pryce (Jamaica) is in the 200 against strong competition in current world leader Shaunae Miller (Bahamas) and Tori Bowie (USA/adidas). Allyson Felix (USA/Nike) runs the 100 against surprise world leader Elaine Thompson (Jamaica).

Dawn Harper-Nelson (Nike) had a great 2014 season. She won the USATF title and the Diamond Race trophy. While she didn’t win everything she entered, she won more often than anyone else and was clearly the world’s best hurdler. So it was not a huge surprise to see her beaten at the Drake Relays, it was shocking to see how it happened. Jasmine Stowers (Nike) won with a time of 12.40 second, the fastest time ever run before the month of June–and a time that Harper-Nelson has topped just once in her long and illustrious career. If it’s anything but one-off success for Stowers, then we have a new hurdle superstar on our hands.

On the other side of the world, two more top women’s hurdlers will be facing off. Sally Pearson (Australia) is the reigning Olympic champion, but has struggled with injury since then and is now one of a handful of hurdlers in an evenly-matched struggle for global superiority. Queen Harrison (USA/Asics) is one of those competitors; she was second on the 2014 world list.

The 2015 edition of the IAAF’s Hammer Throw Challenge gets started this weekend at the Seiko Golden Grand Prix. The top entrants based on last year’s standings are Wang Zheng (China) and Martina Hrasnova (Slovakia), fourth and fifth in 2014.

The lone member of the USA’s World Relays 4×100 team not at Kingston over the weekend is Mike Rodgers (USA/Nike), who will be running the 100 on the track built in Manchester’s city centre. His main opponent will be Kim Collins (St. Kitts), the 39-year-old ageless wonder who dominated the 60 meters during the indoor season. This “street meet” will have all kinds of competitions: 100 meters, 150 meters, 100 and 110 hurdles, 200 hurdles, and a men’s/women’s mixed 2×100 relay. Field events will include a pole vault and long jump plus my favorite, the street javelin. (Maybe I made that last one up.)

Brandon Johnson (Nike) had a breakout 2013 season, making the US team for the Worlds and progression to the semifinals, then took a big step backwards in 2014. He looks to be back in form based on his heroic 1:44 split in the distance medley relay at last week’s World Relays. Matt Centrowitz (Nike Oregon Project) is consistently one of the world’s best milers, but the 800 is at the short end of his range.

Mac Fleet (Oregon TC) won the NCAA 1500 meter title last year for the Ducks and has won 11 of his 13 races at Hayward Field, but will have his hands full against Pat Casey (Oregon TC), who was third at both the Wanamaker Mile and the USATF Indoor Championships.

Ashton Eaton (Oregon TC) is an exceptional sprinter for a decathlete, but he’s up against top-ranked sprint specialists at the Oregon Twilight. In the 100 meters he’ll race against Joe Morris (Ultimate Speed), and in the 400 he’ll meet Bryshon Nellum (Nike), both of whom were on US relay teams at the Penn Relays.

Haile Gebrselassie is the headline name, but at this point he’s more of a world-class celebrity runner rather than a real threat to win. He’ll run the race twice: once with the elites, then go back and run again with the ordinary folks. Stephen Sambu (Kenya) is probably the favorite, a roadie whose best distance is the 10k. Wilson Kipsang (Kenya) might be his greatest threat, a former marathon record holder with excellent speed over the shorter distances; he was second at this race last year.

Defar, now vs then

The women’s race is deep with talent, such as marathoners Edna Kiplagat (Kenya) and Tiki Gelana (Ethiopia) and 10k specialists like Gemma Steel (Great Britain), Jo Pavey (Great Britain) and Fionnuala Britton (Ireland), but the race is all about Meseret Defar (Ethiopia). The eight-time Olympic and World champion and many-time world record holder is running her first race since becoming a mother. If Defar runs like she once did, then the race is for second place. But that’s a big “if”.

Jared Ward (Saucony) is the current points leader in the USATF Running Circuit. In his first year as a pro, he won the US marathon title in March and was runner-up a the US half-marathon championships in January. The defending champion, Christo Landry (Mizuno), is coming off a 10k PR 27:55.19 at the Cardinal Invitational last week.

In the modern incarnation of the Big East, the two dominant track powers are Villanova and Georgetown. The USTFCCCA computer rankings suggest that the Hoyas are the men’s favorites and the Wildcats are the women’s favorites.

Cornell and Princeton have so dominated the Ivy League that they have shared all of the last 12 men’s titles and 12 of the last 13 women’s titles. Once again, both championships are expected to come down to these two teams. 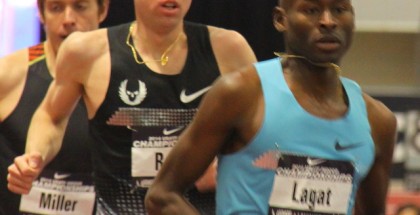 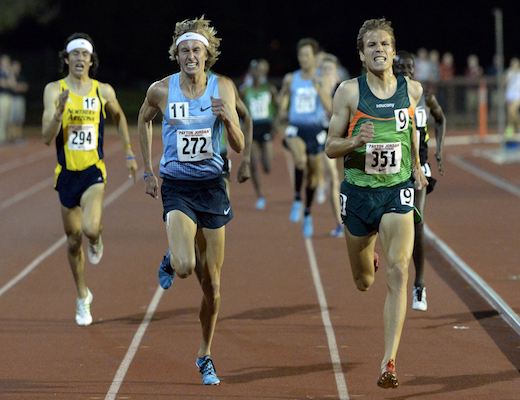