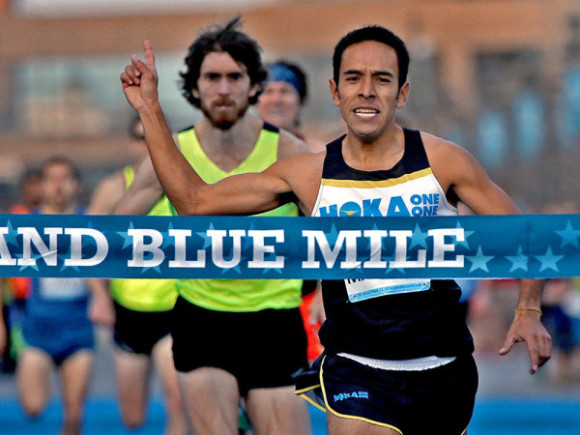 The USATF Championships continue today at Hayward Field in Eugene, Oregon. Here is our handy guide to what, why, how, when, and who to watch.

Pat Price has you covered.

The above three finished in this order at last year’s championships and all three have achieved the requisite World Championships qualifying mark (6075 points), as has Heather Miller-Koch (Central Park TC).

Kendricks, still just 22 years old, has been competitive with the best in the world. Blankenship is even younger and is figured as Kendricks’ biggest threat. Veteran Walker knows how to get it done in championship meets like this. Andrew Irwin (Arkansas) is inconsistent but could get into the top three if he’s at his best.

Bingson, the American record holder and two-time defending champion, hasn’t thrown well yet this year. That makes this event rated as a toss-up between four athletes who have traded wins: Bingson, Berry, Campbell and Stevens. Deanna Price (Southern Illinois) had a huge day at the NCAAs, and Britney Henry (Oiselle) could be a contender too.

Bartoletta would be a huge favorite if you went by 2015 results alone, but Olympic and World champion Reese (who has a Worlds wild card entry and does not need to place to make the team) is always capable of a big jump. Burks was impressive at the NCAA Championships. Jenna Prandini (Oregon) just missed a spot on the US team in the 100 and could bounce back here.

Lewis-Smallwood had a dream season last year and broke the American Record, but hasn’t been the same in 2015. Regardless, she’s still the favorite. NCAA champion Vaughan and first-year pro Ashley are probably the best of the rest. Liz Podominick (National Athletics Institute) and Summer Pierson (unattached) are the challengers to watch.

Coburn is head and shoulders above the rest. Any of a long list of athletes could get the second and third spots on the US team for the Worlds: Stephanie Garcia (New Balance), Ashley Higginson (Saucony), Nicole Bush (New Balance), and NCAA champion Colleen Quigley (was Florida State, now Nike/Bowerman TC) are the favorites, but US depth in this event has never been better.

Super-vet Jackson is in the midst of his best season in years. Dutch and Stigler are the most consistent of the rest. Kerron Clement (unattached) is making a comeback after some time away from the sport and is capable of anything from first to last. Michael Tinsley (Nike) has a Worlds wild-card entry and did not contest the semifinals.

If you only watch one race today, this should be it. Manzano and Centrowitz are proven championship performers, but races like this are always unpredictable. Blankenship is having his best season ever and can hold his own against anyone. The locals will have plenty to cheer for; finalists include four from the Oregon Track Club (Blankenship, Pat Casey, Jordan McNamara, Andrew Wheating) plus three Oregon Ducks (Will Geoghegan, Colby Alexander, Daniel Winn).

This was figured as a three-way battle until Sanya Richards-Ross failed to qualify to the final; the winner between McCorory and Felix will be the favorite for gold at the Worlds. Third place is probably a battle between Natasha Hastings (Under Armour/New York AC) and Phyllis Francis (Nike).

Merritt hasn’t been his normal self yet this year but is still the overwhelming favorite. He has a wild-card entry to the Worlds and doesn’t have to race here but is anyway. That means that three other athletes will make the US team for the Worlds, and the best chances are figured for Vernon Norwood (LSU), David Verburg (adidas), and Tony McQuay (adidas).

Stowers began the season with crazy-fast times and has come back to earth a bit, while Nelvis has steadily improved and ran the third-fastest non-final of all time in the heats. NCAA champ Harrison is rated as a slight favorite over the rest, but this event is fantastically deep. Semis will be run earlier in the day and it will be harder to make the final here than at the World Championships. Brianna Rollins (Nike) has a wild-card entry to the Worlds and has an automatic spot on the team.

Day 2 in Eugene: The Heat is On 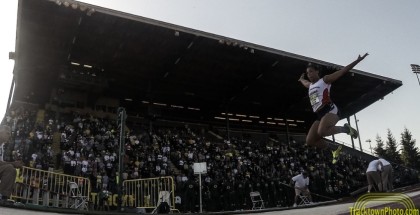 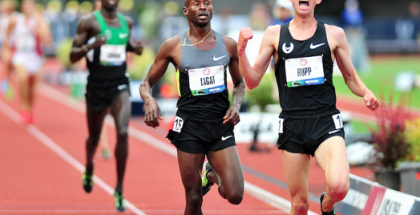