The Division I college action this past weekend consisted of preliminary rounds in the east (Greensboro, NC) and west (Austin, TX). Competitors were the top forty-eight entrants in each event in each half of the country, and the top twelve in each event at each site advance to the NCAA final round at Oregon’s Hayward Field in two weeks.

There may not be a lot of drama in qualifying rounds, but there definitely is some and what there is came in several categories. There are top athletes and relay teams who failed to advance to the NCAA final round in Eugene and there are surprises who did qualify. Some athletes showed prime form, ready to compete for a national championship. And then there are the effects of these qualifying rounds on the races for the team championship.

Let’s take a look at all of these categories.

Two NCAA title favorites who failed to advance were Texas A&M’s 4×100 relay and Florida long jumper Marquis Dendy. Both have major implications for the team championship, as both the Aggies and Gators were figured as favorites to contend for the men’s championship.

The Aggies had run some great times in the relay this year, twice going under 39.00. But here they made the final pass outside of the exchange zone and failed to advance to Eugene.

Dendy had gone over 27 feet on multiple occasions in 2013, distances that would have put him just a few centimeters behind gold at last year’s Olympic final. Here he had foul trouble and scraped into the 16-jumper “final” but still couldn’t get over 24 feet and ended up one place out of going to Eugene.

There were lots and lots of low seeds advancing to the NCAA championships final round, such as Ohio State long jumper Korbin Smith. Ranked 81st (out of 96), he finished tenth in the east prelims and punched an improbable ticket to Eugene. He’s not likely to impact the top end of the competition, but some of this weekend’s surprises will require a redrawing of the formcharts.

Texas A&M’s Dave Brown won triple jump in the west regional with a distance of 16.25 meters (53′ 0″), which added more than two feet to his PR. If he reproduces that effort or something near it in Eugene, he’ll score points and big ones. He entered the prelims as the 44th seed.

Georgia sophomore Nick Vena won the east prelim shot put with a distance of 19.43 meters (63′ 9″), which improved his PR by nearly a foot. The one-time high school superstar has struggled to find the same form in college, and this was a big breakthrough for him. The distance puts him second on the 2013 D-I outdoor list.

In some events, athletes did more than just get through qualifying rounds. They threw down a gauntlet.

Young looked good in the 200, the event in which he made last year’s Olympic team, but Jackson State’s Anaso Jobodwana looked better. He won his semifinal heat in 20.13 (wind: +1.7) which is the 2013 collegiate leader.

A pair of Texas A&M athletes impressed in Austin. Javelin thrower Sam Humphreys won the west prelims with a big PR of 81.90 meters (268′ 8″), which puts him at #7 on the all-time collegiate list and is just shy of a World Championships ‘A’ qualifier. More importantly from a competitive point of view, he beat two-time defending NCAA champion Tim Glover by more than ten feet. Aggie steeplechaser Henry Lelei won his heat in 8:27.62, a new collegiate leader.

Arizona’s Lawi Lalang won both the 5k and 10k and looks tough to beat in Eugene in two weeks.

The Texas A&M Aggies 4×100 was figured to get ten points but will get zero. That was their only error, though, and others did very well. Lelei and Humphreys looked like NCAA Champions, as did hurdler Wayne Davis II (who won his semifinal in a wind-aided 13.27). Only three Aggie entries seeded in the top 24 failed to advance, while six of their entries seeded below 24th will go to Eugene. All in all, the Aggies have 20 entries, and a dozen have a good chance to score.

It was expected that the Florida Gators would get ten points out of Marquis Dendy in the long jump but also will get zero. The Gators made no other mistakes, but had less room for error to begin with. They will have 13 entries and nine are expected to score. Four entries seeded in the top 24 failed to advance, and none outside the top 24 made it in.

The Arkansas Razorbacks won the NCAA indoor title as well as the SEC titles, both indoors and out, yet find themselves underdogs going into the NCAA outdoor championships. Maybe not now, as they had by far the best prelim round of any of the contending teams. They will bring 20 qualifiers to Eugene, and every single athlete considered a scoring contender made it through. Only two of their top-24 seeds failed to advance, while five of their qualifiers were seeded below 24th.

Another team that helped itself was the Oregon Ducks, who made no errors at the west prelims. They will bring thirteen qualifiers, but none of them were “surprise” qualifiers outside the top 24 seeds.

There were three notable instances where a highly-favored athlete failed to qualify to the NCAA final round in Eugene, one each on the three teams expected to battle it out for the team championship.

The first was Jordan Hasay’s poor run in the 10,000 meters at the west preliminaries in Austin. When the leaders went, she had nothing in her legs to go with them. In retrospect maybe this shouldn’t be a huge surprise, as Hasay is inexperienced at the distance (it was only her third-ever race longer than 6k) and has difficulty in the heat.

The other two were much more surprising. Texas A&M discus thrower Shelbi Vaughan, fourth at last year’s Olympic Trials, failed to make a mark at the west preliminaries and will not compete in Eugene. Kansas long jumper Francine Simpson, third at the NCAA Indoor Championships, only mustered at 19th-place finish in Austin and also failed to advance.

The toughest women’s event at the NCAA final round in two weeks looks like the 400 meters.

Georgia freshman Shaunae Miller, about the most accomplished age-group quartermiler in history, won the NCAA indoor title in an impressive 50.88 seconds, but came up hurt at the SEC Championships. She showed she’s back in form by winning the east prelims in 51.72.

Last year’s NCAA outdoor champion was a hotshot age-grouper too. Illinois’ Ashley Spencer won the title as a freshman, then went on to become the IAAF World Junior Champion. After playing around with the 400 hurdles a bit this spring, she made a statement at the west regional with a 50.88 run in the semis.

Arkansas’ Regina George, an Olympian for Nigeria and owner of the fastest split at this year’s Penn Relays, won her semi with an impressive 51.00. And waiting in the wings is Kansas’ Diamond Dixon, the 2012 NCAA indoor champion, who has been slowly rounding into form after a hamstring injury.

I noted that all three major contenders for the team title lost some points at the preliminary round. Let’s take a deeper look at each of them.

The Oregon Ducks have been runner-up four times in a row and will be the home team in two weeks, making them the sentimental favorite to win. They may be the most motivated team out there too, and they’re certainly pulling out all the stops.

Oregon has fifteen qualifiers, two of which came from outside the top 24 seeds, and their only shortcoming was Hasay in the 10k. The Ducks will bring three athletes who could score unexpected points: Megan Patrignelli in the steeplechase, Liz Brenner in the javelin, and Jillian Weir in the hammer throw. A patient steeplechaser whose only goal is to get on the scoreboard can take advantage of others’ mistakes, so points are possible there merely by having an athlete on the starting ling. Brenner is a four-sport star who hasn’t thrown since high school and she’s consistently improved to the point where no one can tell exactly what will happen at the NCAAs. Weir has also moved into a position where she just might be able to squeak out a point or two.

Whereas Oregon has upside, the Kansas Jayhawks don’t have much. The latest Track and Field News formchart predicts the Jayhawks to win over Oregon by a single point, but they have only one opportunity to score points from a qualifier not on the formchart (Christen Guenther in the pole vault). So while they’ll score a lot of points, they have a lower scoring ceiling and can score few if any “surprise” points.

The Texas A&M Aggies have the most qualifiers with sixteen, and Vaughn’s discus foul-out was their only misstep. Their lone surprise qualifier is javelin thrower Kendall Munoz, who is a long shot to score, but they have several very real chances to score above and beyond expectations in the 100 and 200. The margin of error is small in the sprints, but the Aggies bring four sprinters in the 100 and three in the 200 and should be able to score gobs of points in those two events even if someone does make a mistake.

Arizona high jumper Brigetta Barrett, the collegiate record holder and Olympic silver medalist, had a full Friday and Saturday. Thunderstorm delays meant her west regional qualifying round didn’t finish until 2:00 AM (Eastern time) or thereabouts, and just over 11 hours later she was jumping against some of the world’s best in the Adidas Grand Prix, 1,700 miles away in New York City.

The NCAA Division II champions were St. Augustine’s men (recap, results) and the Academy of Art’s women (recap, results). St. Augustine was dominant, scoring more points (105) than second and third place combined, and their relays ran serious Division I-like times (38.91, a D-II record, and 3:04.89). “Art U” was led by hurdler/jumper Vashti Thomas, who ran 12.70 in the 100 hurdles and would be a title contender in D-I.

The NCAA Division III champions were won by UW-La Crosse’s men (recap, results) and Wartburg’s women (recap, results). UW-LAX hosted the meet in their brand-new facility, the best track stadium in Wisconsin, and took a narrow two-point victory earned in the concluding 4×400. Wartburg likewise won the meet on the final event, which turned out to be the triple jump.

The most impressive individual effort at the D-III meet was by UW-Oshkosh’s Christy Cazzola, who won a single-day distance triple. She swept the 800 meters (2:05.93), 1500 meters (4:17.21) and 5000 meters (16:31.17). The 27-year-old mother of two, who took a roundabout route to college, still has a year of eligibility left but plans to graduate in December and enter the teaching profession.

The NAIA Championships were won by Indiana Tech (recap, results). If you’re wondering whether they won the men’s or women’s title, the answer is yes–they won them both. The notable performance was by Spring Arbor (Mich.) runner Nathan Martin, who won the marathon in a meet record time of 2:19:18, and by Concordia (Ore.) coach Mac Wilkins, whose athletes swept the men’s and women’s shot put and discus.

There will be some college action this weekend, as three collegians are slated to compete at the Prefontaine Classic, but the real action begins on Wednesday at the NCAA Championships. You can count on The Daily Relay for previews, recaps and analysis. 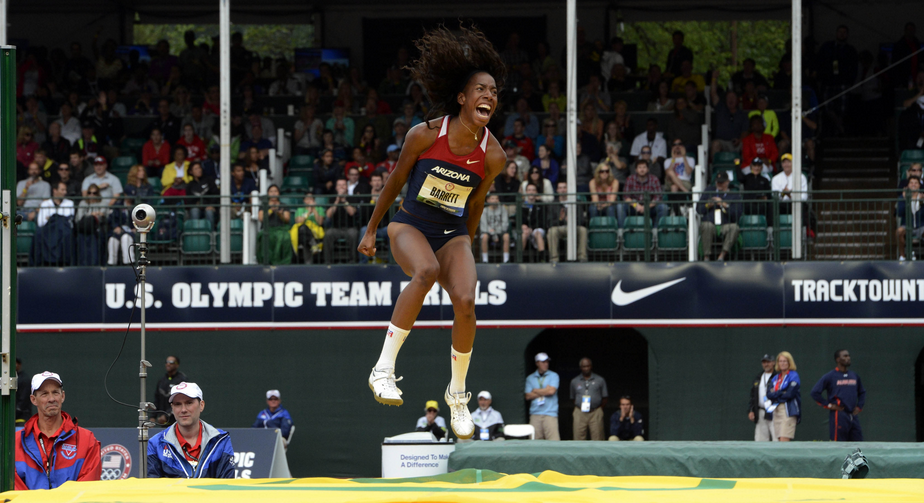