Whose career would you rather have, Meb or Rupp? Biggest World Indoors favorite, and other reader questions

Let’s the start with the bad news, over the past week there have been a string of positive drug tests including, world champion 1500m runner Abeba Aregawi, Tokyo Marathon champion Endeshaw Negesse and Olympic silver medalist Gamze Bulut.

……and continue with more bad news, it looks like Russia is ignoring the terms of their suspension and have yet to distance themselves from a some shady coaches and doctors.

And while we’re at it….. Nike money to Kenyan seems to not have reached it’s intended destination.

Ok, that’s it. Let’s rid ourselves of meldonium, put the pessimism aside for the moment and answer some reader questions.

–At this moment in time, whose career would you rather have, Meb Keflezighi’s or Galen Rupp’s?

By my count Meb is a 4x NCAA champion, a 14x US champion, 2x winner in WMM races, now a 4x Olympian, and of course an Olympic marathon silver medalist. Rupp is a 5x individual NCAA champion, now a 9x US champion with his win at the trials, now a 3x Olympian, and of course an Olympic silver medalist in the 10,000 meters. While Meb surely is a medal contender in Rio, I think he would also have to be considered unlikely to medal, where as after his performance at the trials Rupp might be considered a favorite to pick up his 2nd Olympic Medal as well as a medal possibility in the 10k. While they have similar bodies of work, Meb also has 10 years on Rupp, and it would seem Rupp still has several years ahead of him and many chances to attain Olympic/WC medals, potentially major marathon titles, and very likely a 4th Olympic berth, and Meb is on his victory lap.

Looking at those stats, Meb has the edge. Both men have a silver medal from the Olympics. Meb adds wins in New York and Boston, which are as impressive as an Olympic podium in my mind. Because of the bombing the previous year, Meb’s Boston win has symbolic value that went beyond upsetting a major marathon field. As good as Rupp might get in the marathon, I doubt he will have the platform to achieve that type of victory in his career.

Rupp has at least one more Olympics after 2016 and several years to attempt to pick up some wins on the road. But because the marathon is so hard to predict, and Rupp isn’t all that young, I’ll go with the known quantity and take Meb’s career.

I arrived at this decision also in part because I wouldn’t mind being in a press conference one day where my peers pass around a mic and take turns describing me as a hero. Meb is certainly more beloved, which doesn’t make his career better, but it has to make it more fun.

To be clear, Rupp has fans. When I spoke with people at the Olympic Trials in 2008, many were there to see Rupp. Granted, the meet was in Eugene, but it was surprising to see how named him specifically. A few years ago at the Oxy High Performance meet I watched packs of teenagers hang around the track waiting for autographs from Rupp and Mo Farah while they did a post-race workout. The altitude tent, the dormant Twitter account and his subdued public presence puts him at a distance from the running nerds, but he wins, and wins a lot, which makes him relatable to the more mainstream audience. I’m not sure whether that’s been impacted by the BBC/ProPublica report. People who follow that story are probably the ones who weren’t as enthusiastic about Rupp to begin with.

Meanwhile, Meb’s turned into the ambassador of the sport. He’s a spokesperson for both the average runner and the elite, without compromising his identity with either. With each passing race he reinvents ways to be inspirational. During his career he’s thrown out the first pitch at Fenway Park, written a book, been a guest on Letterman, appeared in commercials, legitimized an entire shoe company, and taken the best picture ever with Bill Walton. Meb is your winner.

-Who is the strongest favorite for WID gold? Which race at USID is most up for grabs?

For the favorites, I think Ashton Eaton in the heptathlon is a lock. Genzebe Dibaba should cruise in the women’s 3000m even if Meseret Defar is in the race. I like Dafne Schippers in the women’s 60m, but that race is too short to be confident in making any predictions. In general, World Indoors is hard to forecast.

Nobody has raced more than a handful of times and you never know how much emphasis an athlete is putting on a race that takes place in March. As a result, I think fans put more weight on World Indoors than the athletes do. We are so starved for meets that actually mean something that we assume that because the word “championship” is in the title that everyone will treat like it’s the last meet of senior year.

At the US Indoor Championships, I think the women’s 60m hurdles and men’s 3000m will be very competitive. That should be true of most of the races this weekend. The only ones I feel good about are Matthew Centrowitz in the men’s 1500, Ajee Wilson in the women’s 800m, Brenda Martinez in the women’s 1500m

-How long can a young healthy runner go without a PR before you say it’s over (re: Mary Cain).

I’d be interested to know if shoe companies/professional coaches keep this type of data, if it’s even possible to figure out. There are several variables (age, health, training conditions) to account for, but it still seems like information that would be of value to someone who was about to invest money into an athlete. Absence hard numbers, we rely heavily on anecdotes. The terms young and healthy are also open for interpretation–even Cain has missed some time because of injury the last two years.

Alan Webb, who was the best American high school distance star before Cain, was quiet in 2002 and 2003 after his monster senior year of high school. For Webb, the two down years coincided with the transition of going from high school to college and then college to running professionally. Still, he had a significant drought until 2004, when he set PRs in the 800m, 1500m and mile outdoors.

Jordan Hasay never ran as fast as Cain in high school, but had similar phenom qualities. She ran 4:14 after her junior year of high school and didn’t drop significant time until 2014 when she ran 4:07 (she did run 4:13 in 2010). One more example–Jenny Simpson went five years between personal bests in the 1500m. However, she did win a gold medal during that time.

All of these are different scenarios than Cain, though I think they all provide at least some optimism that she can run a personal best again. Obviously, there are plenty of others who ran fast at a young age and disappeared. Their names are harder to remember. Cain’s best times came in 2013, so this summer will mark three years since she looked like an unstoppable PR machine. If it doesn’t happen this year, I’m still not closing the door. Particularly if she is competitive in high level races. There is a chance that she gets near where she was, but just doesn’t find herself in the right race to break 4:04 or 1:59.

It’s hard to settle on a hard number and it seems too generous to say four years, but I think Hasay convinced me that a high school phenom can flatline, or even regress, for several years and then see a bump in performance. Cain is much better though, and she is dealing with pressures and expectations that also could contribute to her current performance.

-What is the track version of slam ball?

Finally, a serious question. For those that are unaware, SlamBall is/was a basketball-based league that involved trampolines, dunking and even more trampolines. It’s existed on and off since 2002 and during it’s heyday you could find it on televisions in the United States with surprising regularity.

So, this question really amounts to what would happen if you spun off track and field? Could you take the most exciting portion of the sport, add knee pads, and make it even better? Track is at a disadvantage because it isn’t one activity or game, but several cobbled together. There is sprinting, running, jumping, jumping while running, throwing and vaulting. Track’s could just add trampolines to every event (not sure how that works with the pole vault), but I think that’s is too derivative. We want to be original with our fake sports. Besides, how many times could you watch Mutaz Essa Barshim high jump 27 feet before it got old?

However, we can use the same formula. Take the coolest part of track, and amp it up to the point of athletic absurdity.

I think that leads us to somehow making sprinters run faster.

Sprinting on a moving sidewalk? That’s a little better.

Sprinting with enormous fans every 25 meters to give a nice boost from behind?

Looks like Japan has already done that. Problem solved. Your Slamball 100m record is 9.45 seconds.

-For the old-timers…Highlight(s) from last WIC on American soil.

This required some digging on YouTube. It look like the 1987 World Indoor Championships in Indianapolis were known for athletes crashing into things. Here’s Greg Foster and Mark McKoy colliding in one of the most eventful hurdle crashes possible.

Not to be outdone, Ben Johnson set the world record in the 60m and then crashed into the wall at the end of the track. Ah, the pre 1990s……when a three foot barrier, 30 meters after the finish line seemed like a good idea. Given Johnson’s chemical make up during that era, credit to the wall for holding it’s ground.

And if those announcers sounded familiar on the last clip, it’s not a coincidence. After my voyage into the YouTube researching this question, it is clear that Frank Shorter and Charlie Jones called the 1987 World Indoor Championships. That means Shorter and Jones worked the only World Indoor Championships in the United States AND the men’s 5000m final in Without Limits. Quite the double.

If you add the javelin to the indoor program and account for accuracy, he will win gold.

Speaking of Curry, his ascension from mid-major NCAA player to NBA MVP makes him one of the only major sports stars who isn’t assumed to be great in track and field. When pressed, sports fans have no problem saying Lebron James, Cam Newton or that soccer player who said he was faster than Bolt could be professional track athletes. There are varying degrees of accuracy with these projections and, in my opinion, often wind up giving way too much credit to the football player and not enough to the track athlete. But hey, I’m the guy who writes on a track and field blog so I’m supposed to say that.

Curry distinguishes himself with technical skills (shooting, ball handling, etc.) not overpowering athleticism. So even if he runs off 10 scoring titles in a row, you aren’t going to hear too many argue he’d be a world class long jumper or 800m runner. 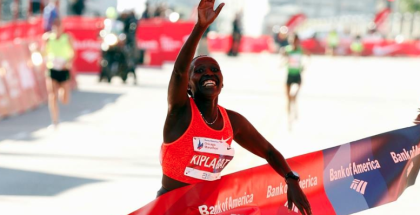