The US Indoor Championships occupied the main headlines in the professional ranks. For a recap of the NCAA Championships stay tuned to this space for Jesse’s recap.

43.18 seems much more realistic than ever before.

Cunningham is the story of the American indoor season mimicking the start to Mary Cain’s 2013–a high schooler resetting personal bests and winning a US title. Relative to the rest of the world, it looks like Cunningham is actually beyond what Cain was three years ago.

The fact that she is doing it in an Olympic year will be catnip for NBC. She’s young, a medal contender and has a famous parent. The promos have already began to write themselves “While the rest of her teenage friends are playing by pool and taking on summer jobs, Vashti Cunningham is concentrating on soaring to new heights in Rio….”

Bronze: Ajee Wilson
Most of the favorites held serve in Portland and advanced to next week’s World Indoor Championships. Some kept it close though and kept the outcome in the balance for some tense moments. Wilson did not. She took the lead much earlier than normal in the 800m and won by a comfortable margin in 2:00.87. Wilson said that after last year’s fall at US Indoors she didn’t want to leave anything to chance. I imagine it was also a good run through for next week to control a race from the beginning. As good as she is tactically over the last lap, the path to least resistance indoors is from the front.

-Matthew Centrowitz
Still undefeated and still unperturbed by every strategy thrown his way. Saturday’s 1500m started slowly with Centrowitz up in the front of the pack. He held his position despite all the surges and movement throughout the race. Indoors, that seems like the best strategy to win a 1500m. In 2014, Ayanleh Souleiman won the gold medal employing this same tactic. The stubborn refusal to ever relinquish lead is simplistic, yet effective.

It doesn’t always go that smoothly. Centrowitz lost the lead and lost it late. Robby Andrews swung wide and pulled ahead by the smallest of margins halfway down the homestretch. Centrowitz didn’t crack and reclaimed the lead just before the finish line.

-American 60m runners
Barbara Pierre won the short sprint and matched Dafne Schippers world lead of 7.00. Before Saturday, Schippers looked like a solid favorite with the top three times of the year. Pierre’s performance makes next weekend a bit more interesting. Tori Bowie ran about as fast as Pierre did from 10-60 meters, but her slow start kept her from breaking 7.10. If she can get a better reaction time, Bowie could be in the medals.

On the whole, the men’s times weren’t fast. The top two finishers at the NCAA meet actually ran faster than the winner at USAs. However, just comparing pros to pros, Marvin Bracy and Trayvon Bromell dueling 6.51s put them fourth and fifth on the world list. Add in Mike Rodgers, who has a wildcard entry into the World Indoor Championships, and the US could send all three to the final and come away with a couple medalists.

-New Balance
They had winners in Boris Berian, Brenda Martinez and runners up with Trayvon Bromell, Cory McGee and Abbey D’Agostino. Five members on a national team that didn’t have two of their best runners–Jenny Simpson and Emma Coburn.

-Unwritten rules
Immediately after the gun sounded in the men’s 3000m at the US Championships the group from Bowerman Track Club went to the front of the pack. Lopez Lomong, Ryan Hill, Andy Bayer and Evan Jager broke open the race in the first few laps with an aggressive pace.

It was clear that they were working together, presumably to put the stress on Galen Rupp who was only four weeks off his marathon debut. They traded off the lead and by the time the group broke up, Lomong had dropped out and Hill was in great position. He held off Paul Chelimo to win in 7:38.60 to Chelimo’s 7:39.00. Jager finished seventh and Bayer slipped back to 10th. Rupp was never part of the lead group and took eighth. His Nike Oregon Project teammate, Eric Jenkins, made up ground as the lead group struggled to keep up the ambitious tempo and took fourth.

After the race, the Nike Oregon Project tweeted this message (since deleted). 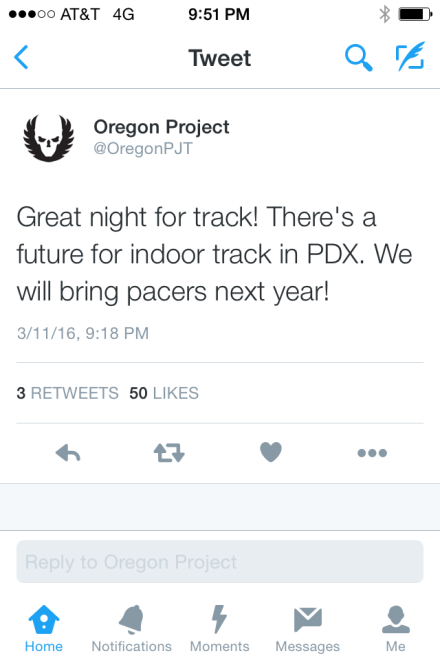 The not so subtle dig in the last sentence about rabbits is a reference to the strategy BTC used in the men’s 3000m. Who knows if it was meant completely in jest or if they truly felt they were wronged. In any event, here’s all the reasons I could come up with for why complaining about team tactics is ridiculous:

Trust me your day will come. You don’t just whack the greatest athlete in the world and get away with it.

-Robby Andrews
The knock on him has been that he is too far back to use his sprint speed to its fullest capabilities. On Saturday, he timed his finish almost perfectly to finish runner-up to Centrowitz. Never underestimate a kicker in good position.

-Erik Sowinski
Finished second to Berian and then received a pass to Worlds from the IAAF. If they are giving out passes why not just extend the qualifying window? I digress, another solid indoor performance for Sowinski.

-Paul Chelimo
Almost outkicked the unoutkickable (sp?) Ryan Hill. Even in an indoor season, I don’t think many people had Chelimo on their World Championship team. And he had to beat a bunch of quality runners to do it. Curious to see if it translates to the longer distances outdoors.

A few questions from readers. Send your question to @HouseofRun to be included in next week’s post. No question too irrelevant

-How many medals will team USA win in Portland?

Even though there are a fewer events and fewer entrants, this is much harder than predicting medals outdoors. Here’s my probably flawed breakdown that comes before I’ve seen the heat sheets:

Taking into account Russia’s non-participation this year, 19 doesn’t seem outrageous. There is room on the above projections to pick up medals, but it’s just as likely that the US stumbles in an event or two and takes home something in the mid-teens.

-Which indoor team members will be new outdoor stars? ie, this is their first team, but definitely won’t be the last?

Obviously if Vashti Cunningham is allowed to compete then she answers this question perfectly. Beyond that, let’s go with a couple of 800m runners. This is Boris Berian’s second year as a professional and if not for a surprisingly poor performance at the USA Championships outdoors last year, he would have already made a national team. He’s only 23, has run 1:43 and finished within a stride of David Rudisha last year. Barring an injury, I don’t see a way he doesn’t make an outdoor team.The men’s 800m is in transition and if he doesn’t get on the team for Rio this year he will still have a ton of opportunities.

Laura Roesler finished behind Ajee Wilson on Saturday which puts her in the company of pretty much every other American 800m runner. Like Berian, Roesler is very young and can contend now for an Olympic spot. The women’s 800m is harder team to make in the US than the men’s, but Roesler has excellent top end speed and championship experience from her time at Oregon.

-Would Marquise Goodwin winning an Olympic medal be good or bad for T&F? Would it bring more fans from other sports to watch crossover athletes or prove false narrative that they’re better athletes?

I think it would be a net positive. And if Goodwin won a medal it wouldn’t be a false narrative, at least not for him. Most level headed people would view it as the accomplishment of an extraordinary athlete, not something that is indicative of the norm. When Bo Jackson and Deion Sanders played football and baseball, there wasn’t a feeling that a bunch of running backs would be great outfielders. Everyone acknowledged that they were freaks. Then again, level headed people and NFL fans don’t necessarily overlap on the Venn Diagram so maybe they would think that every kick returner could jump 28 feet if given the chance.

Here is where track’s objectivity is useful. There are hard numbers to measure every person who competes. Goodwin, or anyone else, only wins a medal if they are good enough to. The hole, however, exists when people don’t actually compete and instead just make wild proclamations usually involving beating Usain Bolt. This is where track fans feel helpless when faced with subjective descriptors of “elite speed” and bogus 40-yard dash times.

I give credit to Goodwin for actually putting himself out there and competing in both sports. If he makes the team, he will have more attention than the average jumper and if he does well it will justify all the attention he will undoubtedly receive. Is that enough to bring a bump in attention for track after the Olympics? I don’t think so. Will it encourage other “major” sport athletes to compete in track? Not unless the money sees a significant boost and the restrictions from their primary sport are lifted.

It’s a testament to the unpredictability of the 1500m that there is an equal chance of either of these results happening next weekend. Even without knowing the full field, I don’t think it’s much of a stretch to say Centrowitz has a strong chance for gold. He’s in incredible shape and indoors suits him perfectly. It’s a rare occurrence when he underperforms at a championship. Andrews was one of the major surprises of this past weekend, not because he finished second but because he put a scare into Centrowitz. The randomness can go both ways, so a week later there is no guarantee that Andrews can replicate what he did on Saturday. I’ll say Centrowitz with the caveat that the safe money is on neither result happening.

-The last Olympic year, these were the top Florida high school sprinters. How crazy is that?

@HouseofRun @dailyrelay the last Olympic year, these were the top Florida high school sprinters. How crazy is that? pic.twitter.com/HuoAceBFTU

We get it Florida, you are fast. 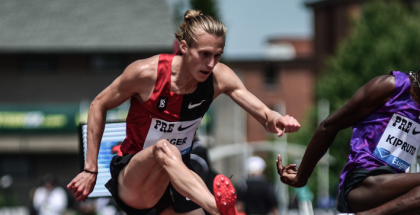