Much has changed since the inaugural edition of the SPEED Rankings two weeks ago. The women’s 100 got turned on its head, Justin Gatlin set a personal best and Jasmine Stowers is running away with the 100 hurdles. With meets in Kingston, Doha and Shanghai there is also a clearer picture of the hierarchy in the sprints and hurdles. Here is my biweekly attempt at a top five. Remember, these rankings are unscientific and most likely inaccurate.

After Gatlin ran 9.74, he is the unquestioned top men’s sprinter in the world. Bolt is closer to the third spot than he is the first. For that to change, he needs to show some ability to run 9.8 seconds. The most impressive race we’ve seen from him was a relay leg where he cut into Ryan Bailey’s lead, but didn’t put a significant dent in the gap.

Anybody other than Bolt wouldn’t get the benefit of the doubt, but Bolt will continue to get that until he completely flops. He isn’t going to race Gatlin at all before the World Championships. Yohan Blake has shown no signs of returning. As a result, Bolt’s toughest competition during the regular season will come from Powell and Bailey, two capable runners, but not nearly as fast as Gatlin.

Powell and Bailey didn’t race last week and are steady in the three and four spots. Bailey’s trolling of the Jamaican fans (and Warren Weir) hasn’t slowed even after he lost to Asafa Powell.

Bracy moves into the top five after breaking 10 seconds for the first time in his career when he ran 9.95 in Beijing. Six American runners have already broken 10 seconds this year.

Since I last did the SPEED rankings, Thompson won the Jamaica Invitational and now has two sub-11 second marks this season. She seems like a solid bet to make the Jamaican team with all the transition that is taking place in the event. Prandini didn’t run at the Pac-12 Championships, but is apparently just fine and is expected to compete the rest of the season.

The questions around Bowie centered on whether or not she could continue her impressive running from 2014. It’s only a few races into the season, but it is pretty clear already that last year wasn’t a fluke. She finished second behind Okagbare in Shanghai and also was runner-up in the 200 at the the Jamaica Invitational. The rapid change in the women’s 100 is remarkable. Of the eight finalists in Moscow two years ago (Fraser-Pryce, Murielle Ahoure, Carmelita Jeter, English Gardner, Kerron Stewart, Okagbare, Alexandra Anderson and Octavious Freeman), really only three have a good chance of returning to the 100-meter final in 2015.

Gatlin jumps Bolt here for the reasons listed above. Their season’s best are still 20.10 and 20.20 respectively. Gatlin is entered in the 200 at the Prefontaine Classic and if the wind stays legal he should run under 19.8 and perhaps even set a personal best. Weir hasn’t raced so he stays put at the third spot. Collegian Dukes has the world lead of 19.99. He ran 19.97 in April last year so running fast early in the year isn’t a surprise. I’m curious if he changes his approach to the season since a World Championship berth is on the line. Last year, we didn’t hear from him after the NCAA season.

Edward won the Diamond League opener for the 200 in Shanghai, though this event loses its sizzle when Bolt and Gatlin stay away.

Here’s another reason why you should support Felix moving to the 400, it will make the women’s 200 a whole bunch more interesting this year. If she stays in the 200, the World Championships will be a blowout just as it was in Doha last week. She ran composed 21.98 and won by over three tenths of a second. All of her other rivals in the event have either faded (Veronica Campbell-Brown, Carmelita Jeter) or are not quite experienced enough yet (Miller, Prandini, Bowie). Shelly-Ann Fraser-Pryce might be the lone exception if she gets going, but I’m not sure how focused she is on the 200 this year.

In short, the 200 looks like it will be Felix in a walk all year. This, of course, is the main reason why someone would stay in an event and not opt to run a 400. Turning down a sure gold medal isn’t something athletes tend to do. Especially if the alternative is running the torture chamber that is the 400.

Men’s 400
1) Kirani James
2) Lashawn Merritt
3) Tony McQuay
4) Javon Francis
5) Deon Lendore
There is even more distance between James and the rest of the top five this week. He won in Shanghai easily, leaving the rest of the field to scrap for second place. McQuay prevailed in a close race with Merritt. As the season goes on, I expect Merritt to pick it up. The last two years his greatest strength has been his durability and I think he has at least one last good run in him.

Lendore enters the mix this week after running 44.41 at the SEC Championships. He’s going to have to work to win a NCAA title and that extra strain will take its toll. Keep an eye on Machel Cedenio of Trinidad and Tobago. He ran 44.36 last week and will combine with Lendore to give T&T a great 4 x 400 team at the World Championships.

Women’s 400
1) Francena McCorory
2) Sanya Richards-Ross
3) Shaunae Miller
4) Courtney Okolo
5) Allyson Felix
I left this one completely alone. McCorory and Richards-Ross could go either way and there are strong cases to be made for both at number one. McCorory won by half a second in Doha and showed that she can come from behind and win a race. Their match-ups are the new Kirani James/Lashawn Merritt rivalry, which kept us distracted the last few years when nobody wanted to race each other in the men’s 100.

This entire top five has the potential to win gold in Beijing. Miller has already run 50.17, good for third best on the year. Okolo has to finish the NCAA season before turning her attention to the professional circuit. She will be a factor right away.

And then there is the runner casting the longest shadow, Felix. She’s set to run her first open 400 of the year at the Prefontaine Classic. Her 21.98 was so good that maybe it dissuaded her from focusing on the 400. I’m not sure what event(s) she is going to choose to focus on, or how much her performance in Eugene will play into her decision. Since 2011, I’ve been consistently horrible at predicting which races Felix was going to run. The double in the 2015 World Championships is tough, but it is much more doable than it will be at the Olympics.

Harris is still undefeated, though Oliver now has the world lead after dropping a 13.15 in Shanghai. Ortega was close behind in 13.19 so this is shaping up as another nip and tuck season in the high hurdles. The chances of Harris running the table are quite low especially because of who he has to face at the Prefontaine Classic and the USA Championships.

Behind Oliver and Harris there is an interesting battle developing for third best American. Richardson has the fastest time of the rest, with Aries Merritt, Ronnie Ash and Jeff Porter close behind. Pascal Martinot Lagarde will get his first major test of the year at the Prefontaine Classic.

It’s good that Stowers is running historically fast times, otherwise her dominance would probably get a bit boring. With the American record in the horizon, and maybe even the world record, this event is still must watch. In Doha, she ran a personal best of 12.35 and won by almost two tenths.

Nelvis was her closest rival and Porter, Pearson, Dawn Harper Nelson and Queen Harrison finished far back. It’s a long season and plenty can change. Right now, Stowers versus the clock is more compelling than the race for the gold medal.

Jackson continued his winning streak and prevailed in Doha with a world leading time of 48.09. He’s run three of the four fastest marks of the year and now you wonder if he can possibly hold this form throughout the summer. Culson was a distant second in Doha, but should close that gap as the season rolls along. Stigler, Tinsley and Dutch round out the American-heavy top five. The race for the World Championships spots will be a very close at the USA Championships in Eugene.

I was hesitant to put Nel in the top five two weeks ago because she was unproven outside of South Africa and her fastest time came at altitude. She put that to rest with her win this week in Beijing and now owns two of the four fastest times of the year. Spencer won the season’s only Diamond League meet and won it comfortably over Williams. Hejova is still yet to appear. Harrison and Shamier Little are the collegiate wildcards. 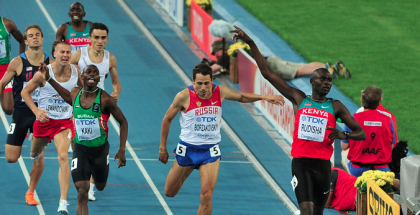