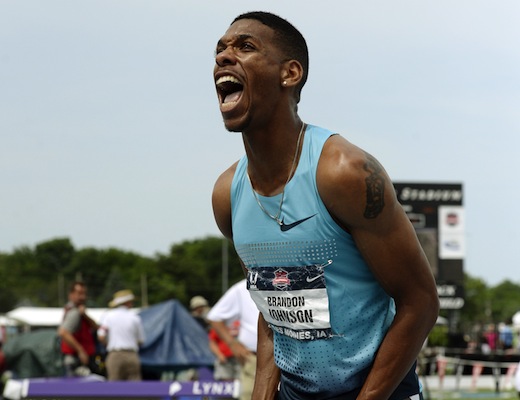 Welcome back to 5 Questions, where we pick the brains of people from all areas of the running scene. Today, we were lucky enough to catch up with 2013 World team qualifier, Brandon Johnson. Johnson was featured in my “Des Moines 2013 Retrospective” yesterday, and for good reason!

1. Daily Relay: First off, congrats on making the World team this past weekend in Des Moines. Your outpouring of emotion was evident as you crossed the line and shouted to the fans. How much did making the podium mean to you?

Brandon Johnson: Thank you for the congratulations, it means a lot! I have been receiving a lot of attention because how I reacted when I made the team. I think there are rare moments in life where you feel complete joy and satisfaction. That is what I felt when I made the team. I could not contain my emotions. Not only did making the team validate my hard work and belief that I could be a world class 800 meter runner, but it meant that I would get my sponsorship from NIKE (Editor’s note: Johnson was just getting gear) and I would be able to continue to run. It’s what I love to do.

2. Daily Relay: Tell me about the decision to move to the 800m, from the 400m hurdles. You were a World Junior medalist in the hurdles, then seemed to disappear from the sport. What inspired you to give it another go? Did you take any time away from the sport or was it all about training for the transition?

Brandon Johnson: I honestly had no intention on running the 800m. During the 2010 and 2011 track seasons, I was not competitively running. I did not have a sponsorship in 2009 and was struggling financially to support myself as a runner. Not having the resources to train like a world class athlete, I found myself questioning my love for the sport. I began asking myself if running was worth not having food in the refrigerator and money in the bank. So I decided to use my UCLA English Literature degree and get a job. I also returned to school to do some post graduate work towards a master in Nursing. While in school I registered for a jogging class at the local community college and the teacher recognized me as “that 400 hurdler from UCLA”. He then introduced me to my current coach Abdul Morceli, who somehow convinced me to run with the cross country team over the summer. Being with 18 and 19 year old guys who were excited to run reminded me of how I once felt about running. From there I decided to run for myself and for the love of the sport. So to avoid pressure I decided to run the 800. It wasn’t important if I ran fast or not because at that time I didn’t see myself as a 800 guy. I was running for fun!

3. Daily Relay: How much has your training changed between the two events?

Brandon Johnson: When I ran the hurdles, I considered a long run 20 minutes. Now I find myself doing long runs for 40 or 50 minutes. The training is quite similar in the fact that my coach is able to recognize what I do well and not take away from that. For example, I still do 200m repeats and 150’s but there is less recovery time, more reps and no hurdles. I have to be careful with training because I took two years off. I have to let my body progressively adapt to the workouts and training over the next few years. I’m like a baby learning to walk. I’m far from where I want to be training wise.

4. Daily Relay: You mentioned after the semi that Nike was giving you just gear at this point. Who else is on your team? Who is your coach, your agent, who are your training partners, and where do you train?

Brandon Johnson: I train in my hometown of Riverside in Southern California, at Riverside Community College. You may see Brenda Martinez running there from time to time, providing a good training atmosphere. My coach is Abdul Morceli, who is one of the greatest coaches. He trained his brother Noureddine (Moreli) to world records and Olympic medals, so I don’t question anything he says. For anyone who doesn’t know him, google Noureddine and you will see how amazing he was. My agent is Emanuel Hudson of HSI International. I train with young runners from Riverside, who pace for me and sometimes kick my butt in longer workouts. I am sure they will be Olympians in the future.

5. Daily Relay: Making the World team will certainly open some doors to bigger meets this summer. What is on your schedule and what is the ultimate goal for 2013?

Brandon Johnson: I have three main goals this summer: 1) PR one more time 2) make the final at World Championships (showing the world that I’m serious about becoming one of the best) and 3) Stay healthy so I can continue to train and grow as a runner. This summer, I will be running in Lausanne, Madrid, Monaco, and London. I am still awaiting confirmation, but this is the planned schedule. The goal is to get in good quality races and run consistently fast.