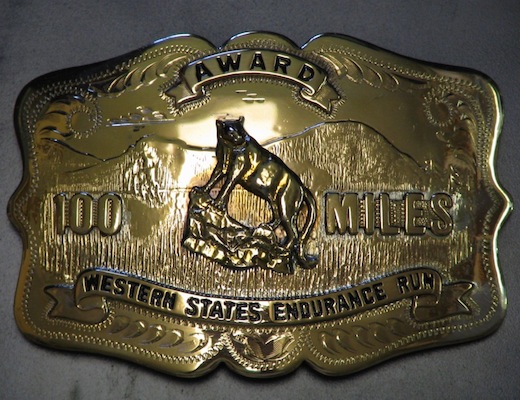 Finish under 30 hours, get one of these

The Western States 100-Mile Endurance Run takes place this weekend, following the historic Western States Trail from Squaw Valley, California to finish on the track at Placer High School in Auburn, on the other side of the Sierras.

The footrace grew out of the Western States Trail Ride, a horse race which follows essentially the same route (but the horses don’t finish on the track). In 1973, Gordon Ainsleigh’s horse pulled up lame and he managed to finish the final 71 miles on foot. He completed the entirety of the trail the following year and the rest is history. It is essentially the Boston Marathon of Ultras, steeped in tradition, the first trail race of it’s kind.

A belt buckle here, earned by finishing in less than 30 hours (a silver one if sub-24) means a lot to the folks that can pull it off. And a lot can go wrong over the course of a full day in the sun on the trails. These are not your friendly “recovery day/soft surface” trails like you run on your cooldowns after a track workout. These trails would likely not aid in recovery.

The race consistently assembles the most competitive field of any 100-mile race in this country. Though most of the runners gain entry through a lottery system, Western assures the most accomplished ultra/trail runners entry by finishing in the top two in a handful of shorter (50mi/100k) races in the Montrail Ultra Cup. Tim Olsen is back to defend his title after setting a course record of 14:46:44 here last year. Previous champions Hal Koerner (2012 Hard Rock 100 champ) and Mike Morton (US 24hr record holder – 172 miles!) return this year. Former Butler runner, Rob Krar, brings his 1:51 800m speed to the 100-miler (he’s also the record holder of the 42-mile Grand Canyon Double Crossing), and former Colorado Buffalo, Cameron Clayton, add intrigue in their first forays at this distance. Other top fellas to watch include Nick Clark, Ian Sharman, Dave Mackey, Dylan Bowman… and Karl Meltzer, who has won thirty 100 mile races, but has never toed the line at Western States. All in all, seven of last year’s top ten return, and there are some very fast new faces.

The women’s race is without last year’s champion and course record holder (16:47:19), Canada’s Ellie Greenwood. With Greenwood having been so dominant at nearly every distance over the past several years, the women’s race appears more wide open than it has in some time. But 2012’s second and third place finishers, Rory Bosio and Aliza Lapierre are returning. As with the men’s race, former UVA/McMillan Elite runner, Emily Harrison, brings 2:32 marathon credentials to this distance for the first time, after finishing second at the JFK 50 to Greenwood last fall. Expect her to compete for the win.

The race begins at 5am PST and will be covered extensively on iRunFar.com, on the @iRunFar and at the official raceday webcast.

Want to know more? Check out the excellent documentary on the race, “Unbreakable: The Western States 100” on Amazon.com