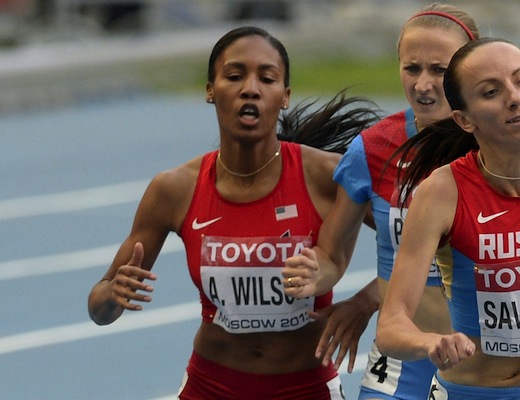 Welcome back to 5 Questions, where we pick the brains of people from all areas of the running scene. Today, we were lucky enough to catch up with 2012 World Junior 800 champion, Ajee’ Wilson. We were able to get a few bonus questions in there as well! Follow her on Twitter @AjeeW and Facebook.

1. Daily Relay: Congratulations on the excellent 2013 season and your recent American Junior record. What were your overall thoughts of your first season as a pro?

Ajee’ Wilson: Thank you! And overall, I think my first season as a pro has been a great one! I really couldn’t have imagined it would have gone so well when I first started. I’ve learned so much about myself and running. I met and learned from so many new people and have had so much fun along the way!

2. Daily Relay: Coming down the homestretch in Moscow, Russia’s Ekaterina Poistogova cut you off pretty hard. How do you react when someone is elbows out coming in front of you like that? Did you have post-race words or think to protest?

Ajee’ Wilson: When that happens there’s not really much you can do but just have to try to keep it together and if your able to, react. In my case, I was so focused on just driving in and closing on the leaders I didn’t really react until it was too late.

Afterwards, protesting honestly didn’t even cross my mind. When I began mentioning it post race and no one confirmed they’d seen what I was referencing, I just figured maybe it wasn’t as blatant as it had seemed. It was a rookie mistake that taught me that I have to be my own advocate, and reminded me how important it is to speak up for myself.

3. Daily Relay: After winning the World Junior Gold in the 800 last summer, you chose to forego your college and sign with Adidas. How hard of a decision was that?

Ajee’ Wilson: Well, my plan originally was just to defer a year to train with my coach and try to make the World Championship team. And that wasn’t very difficult of a decision to make. After watching the Olympics, running at that level became the next goal of mine and I figured after the year was up, I would just head on down to FSU, so I really wouldn’t be missing anything. Making the decision from just deferring to running professionally was a tougher decision. I was nervous about what people would say, and worried about whether or not I’d be successful. The more I thought about my future and what I wanted to accomplish, it became an easier decision to make.

4. Daily Relay: With that in mind… what do you think Mary Cain should do? You both are looked at as the future of Women’s middle distance running. Have you gotten to know her at all?

Ajee’ Wilson: I’ve gotten to know Mary a little bit, and she’s a really sweet, likable, and smart girl. We first met at Indoor Nationals junior year and chatted for a bit as we cooled down, and since then, we’ve been seeing each other at different meets. I think that she should do whatever she thinks will make her, Mary the phenom, Mary the student, and Mary the person, happy. There are a lot of things she’ll have to consider and factor in when deciding what she’ll do next year, but with the support of her parents and coach, I’m sure that whatever route she chooses she’ll continue to kill it and amaze us all.

5. Daily Relay: You have excelled in athletics from an early age. How has your training developed over the years and what is your coaching situation and location now?

Ajee’ Wilson: Each year with training I would just end up doing a little bit more than the previous, all the while learning and gaining experience. Looking back, I’m grateful that all of the coaches that have helped me along the way took a gradual approach to bringing me along.

Since my junior year in high school I’ve been training with my current coach, Derek Thompson, who also coaches Juventus Track Club. The team is based in Philadelphia, so after finishing with school in May, I moved to Philly to train full time.

6. Daily Relay: With no World Outdoor Championships next summer, are you planning on competing for a spot on the World Indoor Team?

Ajee’ Wilson: I’m not really sure yet. I’ll be competing this indoor season, but my coach and I haven’t talked about our plans and goals for next year yet.

7. Daily Relay: After a long season, what are some things you are looking forward to in the offseason?

Ajee’ Wilson: I’m really looking forward to spending time with my family and dog, and catching up with my friends back home as well. Plus, I’m really excited about starting my sophomore year at Temple University! New people, fun classes, I can’t wait!