Today is Day 4 of the US track and field Olympic Trials, and four more events will have finals. Here is your viewer’s guide for today’s action.

There are four finals today, the men’s pole vault, javelin, and 800 meters, and the women’s 800 as well. 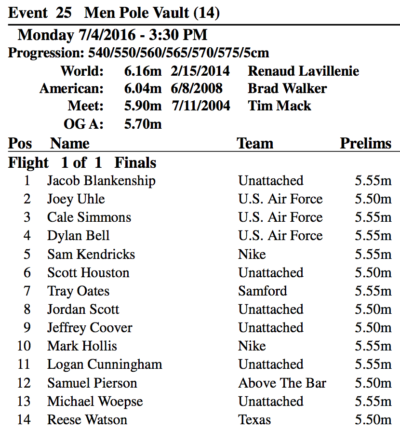 In a nutshell:
Sam Kendricks (Nike) is a very strong favorite to win. All year he’s been competing with and often beating the very best in the world. The pole vault is an unpredictable event and even world record holders can have the dreaded no-height, but Kendricks is as solid a pick as there is in the vault.

After that, it’s a complete toss-up. Four other finalists have achieved the Olympic qualifying standard of 5.70 meters (18′ 8¼”). It appears likely that it will take that high to finish in the top three, but winds can make vaulting at Hayward Field a challenge. And as we saw in yesterday’s long jump, that wind can make a difference. (Or, actually, we watching at home didn’t see, but that’s another post.)

Perhaps the top contender beyond Kendricks is college senior Jacob Blankenship (Tennessee), the NCAA champion just a few weeks ago. Another who could factor is Joey Uhle (U.S. Air Force), a onetime high school rival of Blankenship who could broaden the active military presence on the Olympic team.

Complicating factors: That 5.70 Olympic qualifying standard could play a part in who makes the US team. Besides the three above, only Mark Hollis (Nike) and Logan Cunningham already have achieved it. Even if windy conditions don’t affect qualifying marks, they still bother some athletes more than others. 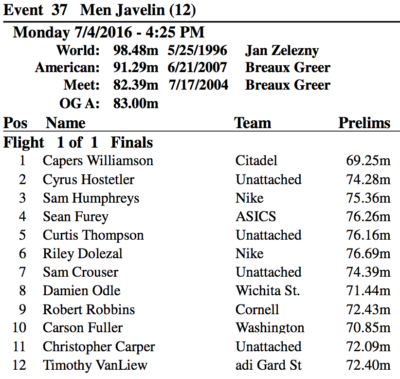 In a nutshell:
Riley Dolezal (Nike) is the consensus favorite to win, but it wasn’t always that way. Three years ago he was a nobody who had to put up a big PR just to qualify for the USATF Championships, and was in the B-flight. There he threw a PR by nearly ten meters and suddenly found himself going to the World Championships in Moscow. Miracles do happen–but very rarely.

The problem for Dolezal is that he does not have the Olympic qualifying mark of 83.00 meters (275′ 3″). Three finalists do: Sean Furey (Asics), Cyrus Hosteler, and Sam Crouser. Neither Furey nor Hostetler has done much to speak of this year, though.

Complicating factor: If no one goes over 83 meters, the Olympic team just might be chosen by default. 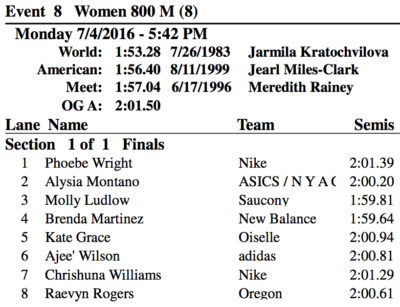 In a nutshell:
While TFN and LRC (above) are in agreement on their picks for the top three and in the same order, that doesn’t mean this is a done deal. The 800 is a highly unpredictable event and it is not overhyping it to say that anyone on the start line has a chance at the Olympic team.

Ajee Wilson (adidas) has been the USA’s best at this distance for a while, but had a poor start to her outdoor season. She’s turned it around over the last three weeks, had a good semifinal on Saturday, and, given her superior tactical skill, I think she’s the safest bet to make the Olympic team.

Alysia Montaño (Asics) is an inveterate frontrunner. It generally works out for her, but it’s easy to overdo it in a big race like this one.

Two athletes who tend to come on strong late are Brenda Martinez (New Balance/Big Bear TC) and Kate Grace (Oiselle), both of whom are equally adept at 1500 meters. Yet another challenger is Molly Ludlow (Saucony), who ran a smooth 1:59 in her semi.

Complicating factors: None. All finalists beat the Olympic qualifying mark just to get to the final. 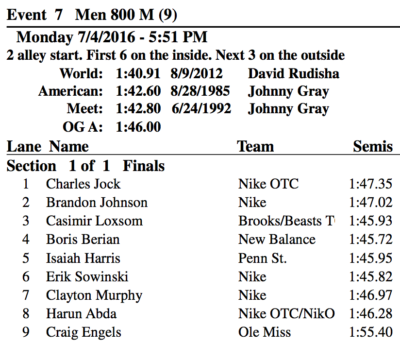 In a nutshell:
It seems like the heats and semifinals were crazy affairs that knocked favorites out left and right. In retrospect…not so much. NCAA shocker Donavan Brazier (then Texas A&M, now Nike) is a college freshman who merely regressed to the mean — just ten weeks ago he ran 1:51 for fifth in a dual meet, and he was only third at the SEC Championships. A great race followed by an underperformance is normal for athletes his age. The other big names cropped out of the picture were Duane Solomon (Saucony) and Nick Simmonds (Brooks), two aging stars now past their prime who have battled injuries over the last few years. The rounds upset the conventional wisdom only because the conventional wisdom was wrong.

We come to the final with the three favorites being athletes who have proven themselves as the USA’s best over the last 18 months, which is almost surprising in how predictable it should have been. Boris Berian (New Balance/Big Bear TC) is the World Indoor champion, the Prefontaine Classic champion, and just beat Nike. Clayton Murphy (Nike) was the western hemisphere’s top finisher at last year’s Worlds. Erik Sowinski (Nike) won World Indoor bronze and was on last year’s Worlds team. This is not madness, this is mundane.

Which is not to say that the final will go to form. This is the 800 meters and weird things happen in races like this. Frontrunners go out too fast and falter, fast finishers leave it too late, people get boxed and bumped and fall. But the favorites for the Olympic team are clear.