Sunday morning will be the final Olympic race for a legend.

Welcome to the last of our daily Olympic track and field viewer’s guides. We’re here to help you find out what, when, how, who and why to watch all of the action. 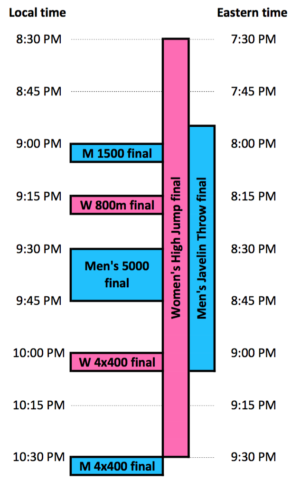 Track and field is a sort of a three-ring circus, with many things happening at once, so a schedule is best understood in a visual medium. Competition will begin at 7:30pm (Eastern time) and finish by 9:45.

Favorites: Thomas Röhler (Germany), Antti Ruuskanen (Finland), Keshorn Walcott (Trinidad), Julius Yego (Kenya)
Americans: none
Canadians: none
The javelin is a difficult event to handicap. Walcott was a huge upset when he won Olympic gold four years ago, and Yego was a minor upset when he won the Worlds last year.

Favorites: Asbel Kiprop (Kenya), Abdelaati Iguider (Morocco), Taoufik Makhloufi (Algeria), Matthew Centrowitz (USA)
Americans: Centrowitz, Ben Blankenship
Canadians: Nate Brannen
The 1500 is another relatively unpredictable event, although Kiprop is still a big favorite to win. Centrowitz is a master strategist who does best in championship racing. A long shot who I think will do well is New Zealand’s Nick Willis, the ’08 silver medalist now running in his fourth Olympics.

Favorites: Caster Semenya (South Africa), Francine Niyonsaba (Burundi), Margaret Wambui (Kenya), Melissa Bishop (Canada)
Americans: Kate Grace
Canadians: Bishop
This race is going to get a lot of attention due to Semenya’s intersex status, and she might not be the only finalist in that condition. For an in-depth and intelligent discussion of the matter, go to The Science of Sport blog.

Favorites: Mo Farah (Great Britain), Dejen Gebremeskel (Ethiopia), Muktar Edris (Ethiopia), Hagos Gebrhiwet (Ethiopia)
Americans: Bernard Lagat, Paul Chelimo, Hassan Mead
Canadians: Mo Ahmed
Farah looks ready to complete an Olympic distance double for the second time. This might actually be the Bizarro World Olympics, since three Americans made the final and no Kenyans did. Lagat showed off an amazing kick at the US Trials and has a real chance at getting on the medal podium.

Favorites: USA, Jamaica
The Americans have such tremendous depth that it’s difficult to imagine them being beaten. Jamaica is a clear #2, but the race for bronze is wide open.

Favorites: USA, Jamaica, Bahamas, Trinidad & Tobago
The Bahamas (population 377,000) beat the USA (population 319 million) at the 2012 Olympics, but doesn’t bring as much depth this time around. It was just the third major championship in world history where the Americans were beaten. If they’re going to get a challenge this time around, it’s likely to come from Jamaica or Trinidad.

The Kenyan and Ethiopian entrants are the favorites, and should be since they are all established stars. But the above history makes that favorite status a bit suspect.

Rupp is a very talented runner with just one marathon under his belt, the Olympic Trials back in February. No one would be surprised if he ends up challenging for a medal, even gold.

And then there is Meb Keflezighi, the ageless wonder who ran his first Olympic marathon back in 2004 and won silver, the USA’s first Olympic medal in this event in a generation. He’s just plain fun to watch.