Welcome to the eighth of our daily Olympic track and field viewer’s guides. We’re here to help you find out what, when, how, who and why to watch all of the action. 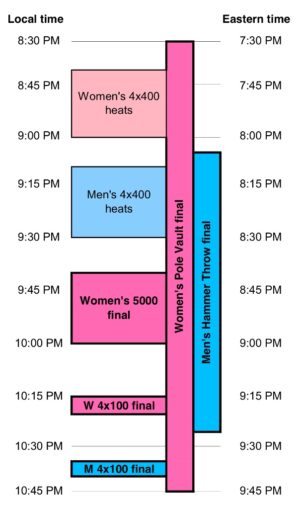 Track and field is a sort of a three-ring circus, with many things happening at once, so a schedule is best understood in a visual medium. Competition will begin at 7:30pm (Eastern time) and finish by 9:45.

Favorites: Jenn Suhr (USA), Sandi Morris (USA), Yarisley Silva (Cuba), Ekateríni Stefanídi (Greece)
Americans: Suhr, Morris
Canadian: Kelsie Ahbe
Suhr contracted a nasty virus in Brazil and it was questionable as to whether or not she’d even be able to compete in the qualifying round. She made it but questions remain. If she falters, Morris has as good a chance at gold as anyone despite fracturing a wrist earlier this year.
UPDATE: it doesn’t look good for Suhr.

It's Rick, Jenn has woke today coughing up blood, still sick,just battling! Will try to get thru warm up pic.twitter.com/j6K5mWAF80

Qualifying format: The top three in each of two heats plus the next two fastest will qualify to tomorrow’s final.
Favorites: United States, Jamaica, Great Britain, France, Italy

Favorites: Krisztián Pars (Hungary), Dilshod Nazarov (Tajikistan), Ivan Tikhon (Belarus)
Americans: none
Canadians: none
Poland’s Pawel Fajdek was the strongest favorite in the entire meet, yet he bombed in the qualifying round and didn’t make the final. In his absence, it’s possible that the gold will go to Tikhon, who is track and field’s Yulia Efimova but worse.

Qualifying format: The top three in each of two heats plus the next two fastest will qualify to tomorrow’s final.
Favorites: USA, Trinidad, Jamaica, Bahamas, Great Britain

Favorites: Almaz Ayana (Ethiopia), Vivian Cheruiyot (Kenya), Senbere Teferi (Ethiopia), Mercy Cherono (Kenya), Hellen Obiri (Kenya)
Americans: Shelby Houlihan, Abbey D’Agostino*
Canadians: none
After Ayana’s stunning 10k world record a week ago, the only real competition here is for silver. D’Agostino was advanced to the final after a fall and a gesture by New Zealand’s Nikki Hamblin that could soften even the hardest Olympic cynics, but a torn ACL means she will not compete.

Favorites: USA, Jamaica
The USA’s journey to the final was one of the stranger things in Olympic history. Now they have to face the Jamaicans, who have the star (Elaine Thompson) and depth.

Favorites: USA, Jamaica
The USA has a history of screw-ups and baton drops. Jamaica has Bolt.