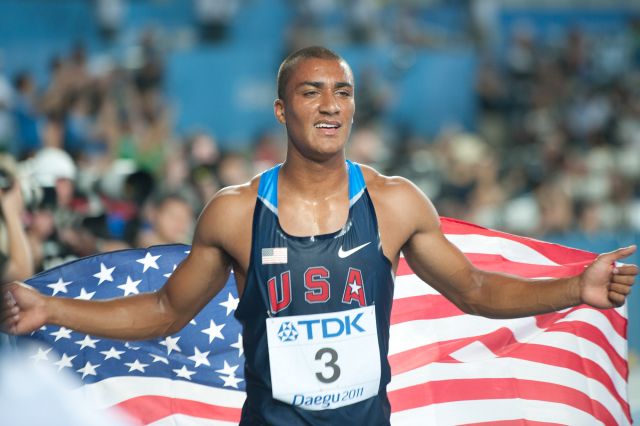 Ashton Eaton is taking the first step towards one of the few things he doesn’t have, a World Championships gold medal.

The final events in our comprehensive previews of the USATF Championships are the multi-events, the decathlon and heptathlon.

Ashton Eaton (Nike) broke the world record at last year’s Olympic Trials. Will we see another world record? Probably not. He withdrew from the big Götzis decathlon in May citing a hurt knee and coach Harry Marra told the Eugene Register-Guard that “we’ll play it safe” at the USATF Championships. He should win and easily, but don’t look for fireworks.

Olympic silver medalist Trey Hardee (Nike) has a “wild card” entry into the Worlds as the defending champion and need only show up and do at least one event to get on the team. He’s competed very little this year and may not do much here either.

This leaves two more spots open on the US team, and the fight for those is where the real competition will lie. I figure it’s down to four men.

Jeremy Taiwo (Washington) might be a bit worn out from the NCAA Championships two weeks ago but he did achieve the ‘A’ standard, which none but Eaton and Hardee can claim. Unless he DNFs or someone else gets over 8200 points, he’s probably on the team no matter where he finishes.

The other three I see as contenders are Gunnar Nixon, Isaac Murphy (Texas) and Gray Horn. Nixon won the World Juniors last year and then gave up his collegiate eligibility. Murphy was fourth at the NCAAs two weeks ago. Horn is an enigma; he finished third at last year’s Olympic Trials after getting in some legal trouble and not finishing his collegiate career.

In order to help you follow the ups and downs of the decathlon, I’ve projected scores among these four decathletes in each event. Here’s how I see them in relation to each other after each, in terms of who’s leading and how many points behind the others will be.

Long Jump
Murphy —
Horn -55
Taiwo -78
Nixon -87
On paper at least, there’s not a whole lot of difference between these guys in the long jump.

Discus
Nixon —
Taiwo -9
Murphy -109
Horn -170
Taiwo is the weakest discus thrower of the group and will come back to the pack here.

Three Americans have achieved the ‘A’ standard of 6100 points, meaning that at least two of them will be part of the US team for the world championships. The third does not have to be an ‘A’ qualifier, so that opens up the competition quite a bit.

Two-time defending champion Sharon Day (Asics) is the heavy favorite to repeat, although there may be some questions about her form given that she DNFed in both of her heptathlons this year.

The other two with the ‘A’ standard are Chantae McMillan (Nike) and Bettie Wade (Nike). McMillan made the Olympic team last year with a huge PR but Wade is the more experienced and consistent athlete. Others who could figure into the mix are Keia Pinnick (Arizona State), Erica Bougard (Mississippi State), Kiani Profit and Ryan Krais (Nike).

As with the decathlon above, here is a projection of how the athletes might rank after each event based on recent results. The final scores figure Day for a big win, Wade second, and a three-way fight between McMillan, Pinnick and Bougard for third.

Javelin
Day —
Wade -209
McMillan -291
Bougard -382
Pinnick -410
Profit -556
Krais -589
The jav is where McMillan should make up a lot of points, as she’s the best thrower out of the contenders and Wade is the worst. Neither is very good in the 800 so they’re going to need a big lead on fourth place after this event. 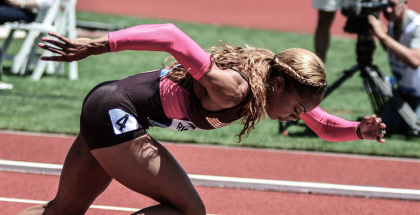