Today’s stop on our tour of America’s track and field stadiums and facilities is the Diamond State. It’s a small state but still has some good facilities.

Delaware State’s Alumni Stadium is the home of the Hornet football and track teams, and seats 7,193.

The largest track-specific stadium in Delaware is at the state’s other Division I athletic program, the University of Delaware. Grant Stadium was originally known as the Mini-Stadium and it seats 1,400. 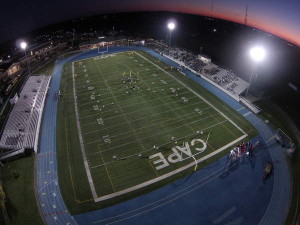 Legends Stadium is a nice enough high school stadium, located at Cape Henlopen High School. It’s situated very close to the Atlantic Ocean and within sight of a lighthouse.