Welcome to the first of our daily Olympic track and field viewer’s guides. We’re here to help you find out what, when, how, who and why to watch all of the action.

Other options
CBC is pretty much always on-air and rarely tape-delays anything, but not all Americans are lucky enough to live in or near the post-industrial hellscapes of Detroit or Buffalo where Canadian TV is widely available.

US-based viewers can watch live feeds via NBCOlympics.com or one of its apps for your smartphone, tablet, or TV plugin. They’re often buggy and can crash or go to commercial at frustrating times, but by and large they’re straightforward and good. Canadian viewers have similar, and more reliable, options via CBCSports.ca/Olympics.

Another option is installing a VPN and breaking free of the shackles imposed by national borders. A Virtual Private Network is a way of making it appear that you are accessing the internet somewhere other than where you really are, which can allow you access to feeds supplied by CBC or BBC or whatever other broadcaster you wish. It’s not anywhere near as difficult, dicey, or of questionable legality as it sounds; they’re common and easy to work with. Like everything else online, VPNs vary in price, quality, and safety, so do your homework first.

Important links
The IAAF’s live results page is awesome, bookmark it.
You also need our own Non-Track Fan’s Guides to the Olympics for men and women, even if you’re a track fan. 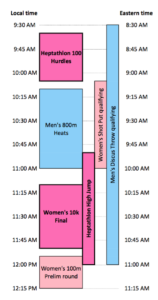 The schedule
Track and field competition schedules are best understood in a visual format since the sport is a sort of three-ring circus, with many things happening at once.

The basics are that morning competition will begin at 8:30am Eastern time and go until about 12:30. There are two finals, the women’s 10,000 meters and the first few events of the women’s heptathlon.

Qualifying format: There will be two groups, with the second group starting at 9:55am. Each thrower gets three attempts and the top twelve will qualify to tomorrow’s final. Anyone throwing at least 65.50 meters (214′ 11″) will automatically qualify (even if that makes more than 12 finalists).
Favorites: Robert Harting (Germany), Piotr Malachowski (Poland), Philip Milanov (Belgium), Christoph Harting (Germany), Gerd Kanter (Estonia), Daniel Jasinski (Germany), Zoltán Kövágó (Hungary)
Americans: Mason Finley, Andrew Evans, Tavis Bailey
Canadians: none
The USA hasn’t had a finalist in this event since 2004.

Favorites: Jess Ennis-Hill (Great Britain), Brianne Theisen-Eaton (Canada), Laura Ikauneice-Admidina (Latvia), Nadine Broerson (Netherlands), Nafissatou Thiam (Belgium)
Americans: Barbara Nwaba, Heather Miller-Koch, Kendell Williams
Canadian: Theisen-Eaton
In case you haven’t seen it in near-constant advertisement, Theisen-Eaton is the wife of American uber-decathlete Ashton Eaton.
The multi-events (decathlon and heptathlon) are about living up to your potential. What that means is that a good hurdler on a bad day might still beat a bad hurdler on a good day, but the first has left points on the table and the second has picked them up. With that in mind, here are the career best times of the expected medal contenders:
Ennis-Hill, 12.54
Theisen-Eaton, 12.93
Ikauneice-Admidina, 13.07
Broerson, 13.39
Thiam, 13.63

I’m sure you’ve seen this going around…

Every Olympic event should include one average person competing for reference.


Well, that’s kind of what happens in the 100 meters preliminary round. Every nation, no matter how small, gets to enter one woman and one man in Olympic track and field even if no one has achieved a qualifying mark. The restrictions are such that they pretty much have to enter the 100 meters. These aren’t exactly “average” sprinters but more like good high schoolers. All but eight get weeded out right here. The regular qualifiers, including every sprinter you’ve ever heard of, get a bye to this evening’s heats.

I’ll freely admit that this 19th-century holdover is one of the odder events in the Olympics. Ridicule it if you like, but the medal winners will be moving fast enough to walk a half-marathon in under 1:25.

The basic rules of racewalking are that at least one foot has to be in contact with the ground at all times, and the back leg must be straight at toe-off. But, like traveling in the NBA or holding in the NFL, no one is ever fully compliant. Three warnings lead to a disqualification, thus the yellow-card scoreboard you will see during the race.

It’s also an event where the complete absence of Russian athletes has made this a wide-open affair. According to betting odds at Ladbrokes, the favorites are Eiki Takahashi (Japan), Zhen Wang (China), and Miguel Angel Lopez (Spain), at 3-1, 4-1, and 5-1 respectively. No Americans qualified, but Canada has three medal threats in Evan Dunfee, Inaki Gomez, and Ben Thorne. Thorne, a former NAIA champion at the University of British Columbia, won bronze at last year’s World Championships.

The schedule
As you can see, the evening competition begins at 7:30pm Eastern time, which is before NBC’s primetime coverage begins. I suspect the Peacock will give little to no live coverage of tonight’s track and field action. Live streams are the way to go.

Favorites: Valerie Adams (New Zealand), Lijiao Gong (China), Michelle Carter (USA), Christina Schwanitz (Germany), Raven Saunders (USA), Anita Márton (Hungary)
Americans: Carter, Saunders, Felisha Johnson
Canadians: Brittany Crew, Taryn Suttie
Long shot worth taking: Carter is a 33-1 bet to win.
Notes: Val Adams was once the most dominant athlete on the track and field circuit, but recovery from injury has made her mortal. If she’s anywhere near her old self then she’s once again a lock to win…
The USA has won just a single Olympic medal ever in this event, Earlene Brown’s bronze in 1960. Brown went on to be a feared defender in roller derby and earned the nickname “747”…
Expect NBC announcers to tell you that Michelle Carter is the daughter of NFL great Michael Carter. Expect them to not know that Val Adams’ “little” brother is Steven Adams, the center for the Oklahoma City Thunder…
Saunders was basically unknown three years ago, then in 2014 she broke the national high school record and won silver at the World Junior Championships. After just two years of NCAA competition she owns about every collegiate record on the books…