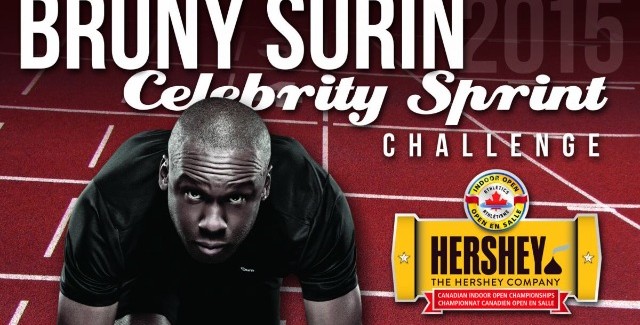 We’ve got a lot of good matchups coming your way this weekend. The last big indoor invitational of the season will be on Saturday in England and the World Marathon Majors kicks off its 2015 season in Tokyo. It’s a quiet week in college track but there will still be a great pole vault showdown.

But the first big matchup of the weekend is unlike anything else in track and field. Here are your lucky 13 things to watch, presented in chronological order.

Who is Étienne Boulay? And what the heck is the Celebrity Sprint Challenge?

The race is exactly what is says it is: a 60 metre sprint race among celebrities, although most of the participants are celebrities only in Montreal. Étienne Boulay was a safety for the CFL’s Montreal Alouettes until just a few years ago and is being touted as one of the favorites. Probably the biggest name in the race is Alexandre Bilodeau, a Montreal native and two-time Olympic champion in freestyle skiing (and, in 2010, the first Canadian ever to win Olympic gold on home soil). Also well-known to the locals is Georges Laraque, a former “goon” twice chosen as the NHL’s best fighter and now part of the Green Party’s national leadership. But I think the winner is going to be Jessica Zelinka, the Canadian record holder in the heptathlon and a first-rate hurdler to boot.

Bruny Surin, the race’s organizer, was a two-time world champion in the 60 metres and was part of Canada’s dominant sprint group in the mid-90s, twice winning Worlds silver over 100 metres and a key member of the 3-time World/Olympic 4×100 relay champions for Canada. He was slated to compete but had to withdraw after a partial achilles tear suffered while—of course—racing against his daughter, a member of the track team at the University of Nevada.

The race kicks off the Canadian Indoor Open, a meet in its second year that acts as an unofficial national indoor championships. The meet will end with a 600 metre race which is being touted as a world record attempt by Luguelin Santos, the 2012 Olympic silver medalist over 400 meters, and Dai Greene, the 2011 World champion over the 400 hurdles. I don’t think there’s any chance the record can be broken on the complex’s flat track, but PR is PR.

The last big invitational of the indoor season, the Sainsbury’s Indoor Grand Prix offers up a chance for the best of the US and European “spheres” of track and field to go against each other. Erik Sowinski (Nike) is clearly the top US-based half-miler this year, and Timothy Kitum (Kenya) is currently #5 on the world list.

Gebreslase vs Muir vs Hasay

Laura Muir (Great Britain) is the home favorite in this race and sits at #2 on the yearly European list. The top athletes competing from the US circuit are Gotytom Gebreslase (Ethiopia), second in the 3k at the Millrose Games, and Jordan Hasay (Nike Oregon Project), who won the 2-mile at the New Balance Indoor Grand Prix and ran a tough mile at the Millrose Games.

Jimoh vs Spanovic vs Nettey

US jumper Funmi Jimoh (Nike) has three wins this season, two of them in Europe, and Ivana Španovic (Serbia) is one position better than Jimoh on the world list. The favorite is suddenly Christabel Nettey (Canada), who shattered her own national indoor record on Thursday with 6.99 meters (22′ 11¼”)—a world leader and also significantly better than the outdoor national record.

Britain’s Dina Asher-Smith is the co-favorite for gold in the 60 at the upcoming European Championships (along with Holland’s Dafne Schippers), but Murielle Ahouré (Ivory Coast) has the year’s two best times.

No one has been remotely close to Shannon Rowbury (Nike Oregon Project) on the US circuit but she’s likely to get a push from Axumawit Embaye (Ethiopia), who has run 4:02 and 4:07 this winter. Rowbury was specifically targeting the American record (4:20.5) last week at the Millrose Games, and that’s still on the table this week.

This is a #1 vs #2 matchup and could be the best of the meet. Fast approaching his 39th birthday, Kim Collins (St. Kitt’s) is having a dream season with five major wins and the four fastest times of the year. Ryan Bailey (Nike) has often been long on talent and short on results, but he put it together last week in Seattle and no one but Collins has been faster this year.

Mo Farah (Great Britain/Nike Oregon Project) got into a Twitter spat with fellow Englishman Andy Vernon a few days ago. While it was juvenile and foolish, I think Vernon was absolutely right to point out that Farah hasn’t faced any real competition at an invitational track meet in quite some time, whether in Britain or abroad. The last time he faced a deep invitational field on the track was June 30, 2013, when he got past Yenew Alamirew, Hagos Gebrhiwet, and Ibrahim Jelian (ironically, at the Sainsbury’s Grand Prix in Birmingham). Since then, invitationals have basically been set up as walkovers for him.

That’s true here too, with one exception: Bernard Lagat (Nike). At 40 years of age he’s clearly on the downside of his talents, but he’s still a force to be reckoned with and a clear threat to win.

This is the weekend before the conference championship meets and usually nothing of any consequence happens in college track. So it was a surprise to see that Demi Payne (Stephen F Austin) and Sandi Morris (Arkansas), both of whom set collegiate pole vault records this year, will go head-to-head on Saturday. Payne is undefeated against collegians this year, and Morris has just one loss (to Payne). They currently sit #2 and #8 on the world list.

When the Tokyo Marathon first entered the World Marathon Majors circuit it was a bit of a fifth wheel, but no longer. The top two entries in the men’s race are Stephen Kiprotich (Uganda) and Tsegay Kebede (Ethiopia), two of the best marathoners around.

Kiprotich did not have a good 2014 season, finishing 12th at London and 5th at New York, but wins at the Olympics (2012) and World Championships (2013) automatically make him the favorite. Kebede didn’t have a tremendously successful 2014 season either—3rd in London, 9th in Berlin—but he was the 2012-13 World Marathon Majors champion.

Lauren Kleppin (Asics) is the #7 seed in the women’s race in Tokyo and faces off against several Kenyans and Ethiopians as well as a Russian and, of course, top Japanese runners. From a US perspective, she’s definitely the one to watch. Just a few American women have ever scored points in the World Marathon Majors series; could she be the next?

The pro fields in both the men’s and women’s races in Tampa suggest that well-established names will win: Dathan Ritzenhein (Nike) and Jen Rhines (Boston AA/adidas), but there are reasons to think that both could be beaten.

I think of Ritz as “old” just because he’s been at the top forever; he was already a high school star before the turn of the century. But he’s just 32. On an objective level he’s the best runner in the field, but I’m not sure whether he’s actually racing or just running hard. He only entered the race as a way to get a long tempo run done; the weather at his home in Michigan is a bit extreme right now and he needed to get away. He’s not going to run all-out, but that still might be enough to win. If not, it’s probably going to come down to Brett Gotcher (adidas), Ian Burrell (adidas) or Fernando Cabada (Newton).

Jen Rhines really is old, although she’s not running like it. She’s forty but finished third at the USA Cross Country Championships and is on the US team for the World cross country championships–twenty years after she was NCAA cross country champion. But this is just two weeks removed from that race and is more than twice the distance, so it’s easy to question what she might bring to the starting line. The dark horse to win is Heather Lieberg (Oiselle), a little-known but fast-improving runner based in Montana who led the first 25 miles of the Medtronic Twin Cities Marathon last October—and is just five years younger than Rhines..