Most of the stories going into this weekend’s NCAA indoor mile national championship race have highlighted the matchup between Edward Cheserek and Cristian Soratos. Cheserek, who is only a sophomore, is already an NCAA legend, having won 5 NCAA titles while running for the University of Oregon’s powerhouse program.

Soratos, on the other hand, is making his first championship appearance as a senior and comes from the lesser known (among track fans) Montana State. However, Soratos is the pure miler of the two runners. He is the #1 seed going into the weekend with a time of 3:55.27, undefeated in the mile this season and has demonstrated tremendous finishing speed. Conversely, Cheserek is relatively less credentialed in the middle-distances. He has won all five of his NCAA titles in the distances (2x XC, 1x 3k indoor, 1x 5k indoor and 1x 10k outdoor) and has the slower PR (3:56.43) of the two. On paper, the Cheserek and Soratos matchup seems relatively even, but it also ignores the defending champion, Anthony Rotich, who won the 2014 edition of this race.

So what will be the headline this year? “King Ches reigns supreme”, “Sorato finishes dream season with NCAA title” or maybe “Once again, Rotich proves he is the NCAA’s best”?

Unfortunately, numbers can often times ruin a good story. The Enowitz Calculator does not care about the story heading into the weekend or what would make for a good headline after the race. The Calculator, rightly or wrongly, makes it prediction solely based on the numbers. Rather than an entertaining story line about Cheserek, Rotich and Soratos facing off in the mile, the Calculator predicts that the battle will be between Cheserek, Kentucky’s Keffri Neal and Oklahoma State’s Chad Noelle. Cheserek is the Calc’s #1 pick and it is not close. That being said, spots 2 through 9 are the closest that the Calc has ever seen. If 2015 is anything like the past few years, we know the mile will continue to be the most unpredictable story at the NCAA indoor championships.

The beauty (and frustration when trying to create a model) of the mile is that if they ran the race six different times, it is likely that there could be six different winners. If this were the case, predictions and models would be no more accurate than rolling the dice and the Enowitz Calculator would be nothing more than an effort in futility. Nevertheless, we march forward.

Predict which runners will make the finals. For example, the calculator may think a runner will perform well if he were to make the final, but due to the different race dynamics in the prelims, he may not even make the finals (prelims go out slower than finals and are different based on the fact that runners can qualify on time, thus giving 2nd heat runners an advantage). The calculator does take into effect the fact that some runners in the final will likely be tired from the prelim rounds or from running the DMR / 3k the night before, but it does not try to predict winners of these preliminary rounds.

As in prior years, I will make predictions based purely on the numbers i.e. “The Enowitz Calculator” and then compare the predictions with my gut reaction picks i.e. “The Scout”. 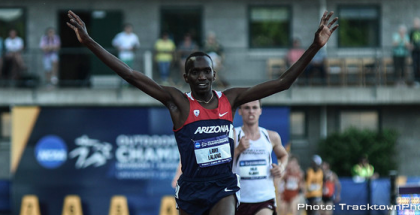