There were five finals on the penultimate day of the Olympic Trials, featuring old and young, fast and faste,r and the best race of the meet thus far. Some highlights…..

The men’s 5000m
In terms of exciting races that didn’t involve anyone ending up on the ground, this is the leader of the meet so far. Brian Schrader and Woody Kincaid weren’t content with a slow pace and took on the yeoman’s task of trying to keep the pace honest. Nobody followed. Their lead swelled to about 40 meters and the two were still comfortably in front with five laps remaining. Eventually, they were absorbed by the front pack.

With just over a mile left, Galen Rupp took off and ran back-to-back laps in 61 and 62 seconds to build a comfortable lead. Either he was going to run away with the race in a Pre-like show of strength, or it was a move of someone who had very little confidence in their finishing speed because they’ve been doing marathon training for a couple months. It turned out to be the latter. The chase group (which included basically everyone) swallowed Rupp up on the backstretch, resetting the race once again.

From there, Bernard Lagat was vintage Lagat. He struggled on the first day of meet in the 10,000, dropping out after falling off the pace set by Galen Rupp. “Is this the way it’s really going to happen?” he said of the idea of his track career ending with a DNF. But his coach said to treat the race like a tempo run, an effort that would make him stronger for the 5000.

Saturday, he looked the strongest among a good group of closers as he entered the last lap. “At that point, my head was just counting the numbers,” Lagat said. He chased Paul Chelimo down the backstretch and found himself in third with 200 meters remaining behind Chelimo and Hassan Mead. After all the twists and turns, it turned into an ideal Lagat race. The pace wasn’t too quick, and there was room to maneuver around the last turn.

Mead took second place and Chelimo held off a fast closing Eric Jenkins for the final spot on the Olympic team.

Merritt said he is planning on running both at the Olympics and will discuss with his coach how, if at all, they will adjust his training to manage the double. Which of the two races does he think gives him the best chance at gold? “Hopefully both of them will be easy.”

Devon Allen
I think people forgot how good Allen was in 2014. In a non-championship year, he beat a championship caliber field at the US Championships. If there was a World Championships or Olympics that year (and Allen decided to continue his season), even conservative estimates would have put him on medal stand. Now he’s atop the US again. His 13.03 blew out the field and moved him to second on the yearly list.

More high schoolers….
Noah Lyles and Michael Norman ran 20.09 and 20.14 for fourth and fifth in the men’s 200m. Lyles’s time was a high school record. “Their confidence level should be on a million right now,” said LaShawn Merritt.

Men’s 5000m favorites come up short
I’m sure some of you had the combination of Galen Rupp, Ben True and Ryan Hill on the Olympic team for the 5000m — or at the very least, you picked one of them to advance. All were in the mix with 300 meters remaining (though Rupp was slowing), but none placed in the top three. “I was flat out, I was hoping for anything there. That was really bad,” True said about his fifth-place finish.

Hill said the hectic race sapped some of typical fast finish. “I pushed hard on the backstrech and I had nothing, really, on the last curve,” Hill said.

“All you have to do is look over and see Ben and we kind of exchanged a look of, ‘Yeah, we know what each other is going through,’ and it won’t ruin our lives cause we know how hard it is.”

Near misses
Aries Merritt was .01 from third-place Jeff Porter in the 110m hurdles, with Jason Richardson another .06 back. In the 5000m, Eric Jenkins ran the last 400m in 53.41, but finished .06 behind a slowing Paul Chelimo. Omar Craddock missed the team by four centimeters in the triple jump. The Trials are terrible.

David Oliver injury
Oliver had the third fastest time in the semifinals, but scratched the finals with left hamstring injury.

Devastated I couldn’t run the final, hurt left hammy in the semi, but thats part of the game. Hats off to the great guys we’re sending!

World record watch: It’s not happening
Unless Jenn Suhr does something spectacular tomorrow in the pole vault, there will be no world records from Eugene. Ashton Eaton came up short in the decathlon, while still winning comfortably. Keni Harrison, obviously, was far off her 12.2 form from last month. Christian Taylor was the last best chance, but he jumped 17.39m to finish second to Will Claye’s 17.65 in the triple jump. 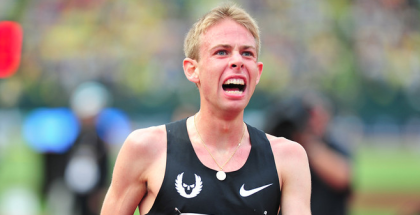