Here is your viewer’s guide to the final day of the US Olympic Trials.

Before you get yourself acquainted with what is coming up today, you may want to check out our recap and photo gallery of yesterday’s action and last night’s House of Run mini-podcast.

After the first day, five women are in contention for the three Olympic spots, all of whom have already achieved the Olympic qualifying mark of 6200 points.

Based on current scores and second-day ability, I am predicting Nwaba, Miller-Koch and Day-Monroe as the three Olympians. Below I have each of the five, their PRs in the remaining events, and the projected scores. Of course I don’t expect each athlete to match their lifetime best in each event, but it does give a fairly good assessment of their abilities relative to each other. 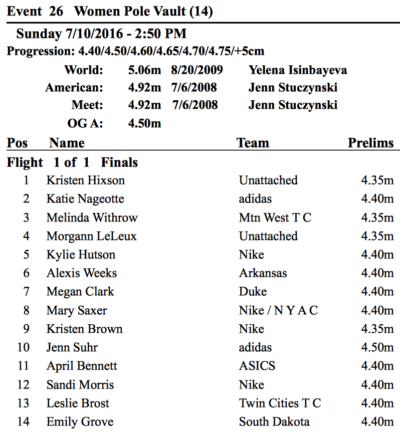 In a nutshell:
The pole vault is an inherently unpredictable event, but world indoor champion and record holder Jenn Suhr (adidas) rates as a strong favorite. Sandi Morris (Nike) would have been another extremely strong favorite until a broken pole and injured wrist took her out of action for a period of time. She returned to action in the qualifying round and appeared recovered.

The USA has quite a few good pole vaulters, so the battle for third could be intense. Among those who could claim it are Kylie Hutson (Nike), Katie Nageotte, Kristen Hixson, Megan Clark (Duke), and Mary Saxer (Nike).

Complicating factors: Eugene seems like it has two kinds of weather: rain, and threatening to rain. 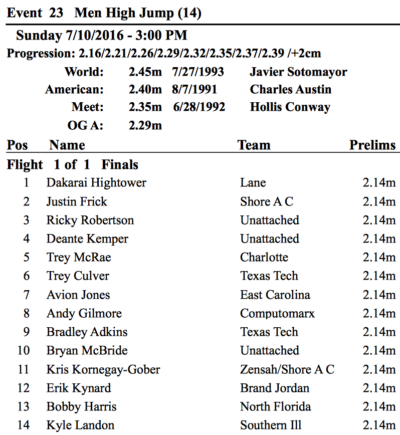 In a nutshell:
Erik Kynard (Brand Jordan) is head and shoulders above the rest of the USA’s high jumpers. After that it’s basically wide open, especially since two of the favorites (Jesse Williams and Randall Cunningham) no-heighted in the qualifying round in heavy rain.

Jeron Robinson (Texas A&M-Kingsville) gave us the unusual year in which an event’s best collegian was in Division II. Bryan McBride and Ricky Robertson are two more who could make it.

Complicating factors: Besides the ever-present possibility of wet weather, the Olympic qualifying mark of 2.29 meters (7′ 6″) could come into play. The finalists who have achieved it are Kynard, Robinson, McBride, Robertson, Avion Jones, and Brad Akins.

Eight finalists get into the blocks at 3:00pm local time (6:00pm Eastern). 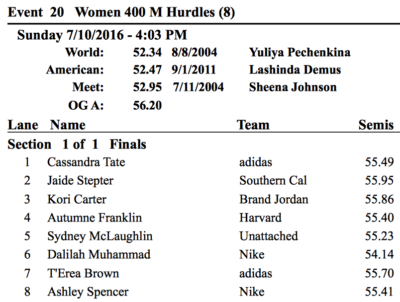 In a nutshell:
Two of the favorites, Shamier Little and Georganne Moline, are not in the final. Little failed to qualify from the semifinals and Moline withdrew due to injury. Everyone will be paying attention to 16-year-old Sydney McLaughlin (Union Catholic HS), who appears likely to finish in the top three and become the youngest track Olympian in 36 years. But don’t be fooled by the hype, Delilah Muhammed is going to win this. I rate third place as a true toss-up, any of the other six finalists could do it. 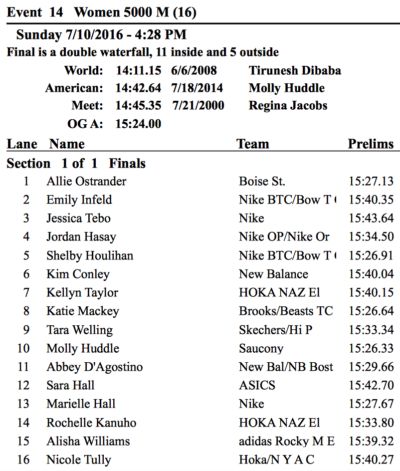 In a nutshell:
Yesterday’s men’s 5000 meters was probably the most interesting race I’ve ever seen. I don’t expect that to happen again, but this race has many more than just three top-notch runners in it and good athletes will be left off the Olympic team.

Molly Huddle (Saucony) is the best runner in the USA right now, although the 5000 is on the short end of her range. The Bowerman Track Club has been en fuego through the Trials and Shelby Houlihan and Emily Infeld are in the picture — and note that Houlihan has a 2:01 PR in the 800, making her deadly in a kick.

Complicating factors: All three 10k Olympians are doubling back to the 5k and, if any finish in the top three, just might relinquish their spot in this event. 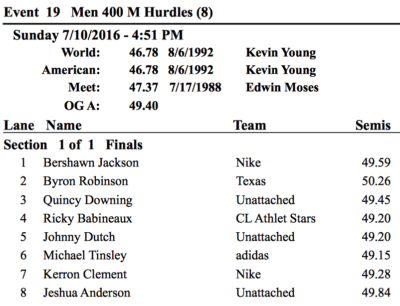 In a nutshell:
Michael Tinsley (adidas) has two wins on the Diamond League circuit this year but might not be the favorite. Bershawn Jackson (Nike) is seeking a return to the Olympics–he made the team in 2008 but missed it in 2012–and at age 33 he has to pick his spots. Johnny Dutch and Kerron Clement (Nike) are your best bets for third.

Complicating factors: Jackson is stuck down in lane one. 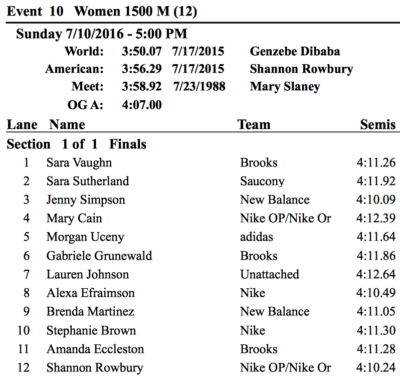 In a nutshell:
Jenny Simpson (New Balance) and Shannon Rowbury (Nike Oregon Project) have been the two best women’s milers in the USA for quite some time. Weird things can happen in the 1500, but it would be considered one of those weird things if either failed to make the Olympic team.

The consensus third pick is Brenda Martinez (New Balance/Big Bear TC), who got bumped in the 800 meter final and taken out of a potential Olympic spot. A few days ago NBC’s Lewis Johnson asked about how she’s dealing with the 800 meter mishap, and she said “What are you going to do when someone clips your heels? Track doesn’t care about your feelings.”

If you’re looking for an outsider, consider Morgan Uceny (adidas) or Alexa Efraimson (Nike). The former hasn’t been the same since a pair of high-profile falls in global championship finals but is looking the best she has in a while. The latter is one of the young women who skipped college track in favor of a pro career and has been quietly doing well. 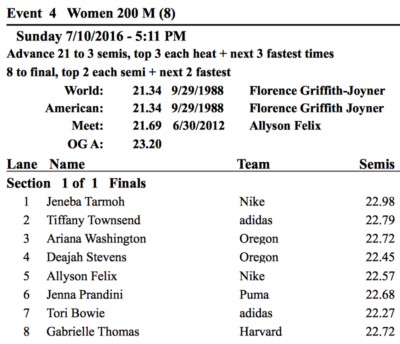 In a nutshell:
NBC will make this The Allyson Felix Show, but Tori Bowie (adidas) will seek to upstage her. In any case, these two look to be the best.

Third place will probably be a current or former Oregon Duck, which is a nice way of hedging my bets. The choices are Jenna Pradini (Puma), Ariana Washington (Oregon), and Deajah Stevens (Oregon). 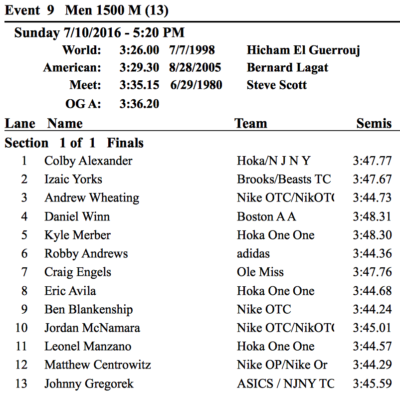 In a nutshell:
Matthew Centrowitz (Nike Oregon Project) is a master 1500 meter tactician with excellent finishing speed and rates as a heavy favorite. After that, the consensus is that three other men are fighting for two Olympic spots.

Two of them are known as fast finishers, Robby Andrews (adidas) and Leo Manzano (Hoka One One). Ben Blankenship (Nike/Oregon TC) is just fast, period.

Complicating factors: Of the other eight finalists, only Kyle Merber (Hoka One One) has achieved the Olympic standard of 3:36.20, and he hasn’t run well at all this year. This could lead to outsiders forcing the pace early, as two brave souls did in last night’s wild 5000 final, and Jordan McNamara (Nike/Oregon TC) is looking for help in doing just that.