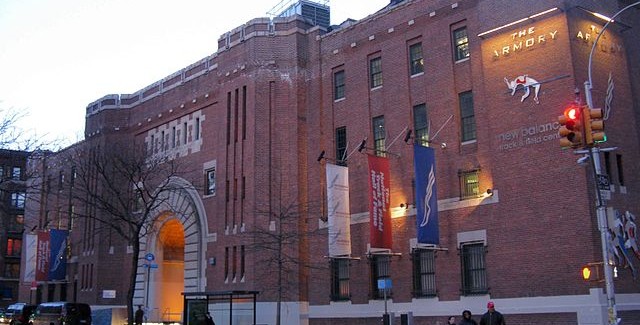 The college action this weekend took place in classic college towns: crazy fans in South Bend, a breakout performance in College Station, a thriller in State College, and a whole lot more. The first meet to talk about, though, was not in a college town but the greatest city in the world.

The Armory Collegiate Invitational is one of the nation’s biggest college meets. An all-day two-day affair, it’s the closest thing to an indoor version of the Penn Relays–except that it emphasized individual events, and it’s scored.

It should come as no surprise that Wisconsin won the men’s competition. At #5, the Badgers were the highest-ranked team in the meet, and they finished third at last year’s NCAA Indoor Championships. On the other hand, it’s not common to see a Big Ten team at the top of anything in track and field; the conference has a grand total of one men’s national indoor title (Wisconsin, 2007) and has as many runner-up finishes as the Mid-American Conference (two each). The last Big Ten winner at the outdoor NCAAs? Minnesota–in 1948. A Big Ten women’s team has never won a national track title, indoors or out, either in the NCAA or its forerunner, the AIAW. (Illinois did win the DGWS title in 1970, the second-ever national meet for college women, but the conference didn’t recognize women’s track until 1982.)

The winners for the Badgers were Mo Ahmed in the 3000 meters and Michael Lihrman in the weight throw. Lihrman’s winning toss of 75′ 4″ moves him to #2 on the yearly college list, behind only Purdue’s Chuk Enekwechi. Redshirt senior Ahmed ran his first race of the season with 7:55.45, #8 on the college list and just shy of his own PR.

“It’s February, time to get everyone rolling,” said head coach Mick Byrne. “I think this weekend we really got a lot of our kids coming into the championship part of the season.”

#6 Arkansas was the top-ranked women’s team in the meet and came away with the victory. For what it’s worth, the Razorbacks are undefeated in four scored meets this year. Mississippi State took runner-up on both the men’s and women’s side, and MSU sophomore Brandon McBride won the 800 with his best mark in over a year, and added a second in the 500 for good measure. The Windsor, Ontario, native is the fastest high schooler in North American history (1:46.07), but had a rough freshman year and got slower as the year went along. If he returns to his high school form, he is an NCAA title contender.

The Aggies rarely leave the friendly confines of Gilliam Indoor Track Stadium during the winter season, and they were at home once again this weekend for a nine-team invitational. The #5-ranked men beat runner-up (and unranked) LSU by 61 points, while the #3-ranked women won by even more (75½) over a higher-ranked team (#9 LSU), and the Aggies might move up in the rankings due to one very unexpected performance.

Texas A&M’s Brea Garrett won the weight throw with a distance of 22.66 meters (74′ 4¼”). It’s a PR by a massive six feet, and moves her from #11 on the national list to #1. So far, her biggest career achievement in the weight is a runner-up at last year’s SEC meet–she’s never qualified to the NCAAs–but now she is a contender for a national title.

The Aggies’ Deon Lendore ran a national leader in the 200 meters with his 20.68 victory, the only other collegiate leader in the meet.

Nebraska swept the 39th edition of their Frank Sevigne Husker Invitational. Notable by their runner-up finish on the women’s side were the USC Trojans. While entering only a limited roster (sprinters and hurdlers plus just one distance runner, three jumpers, no throwers), they managed to score 116 points, and Jessica Davis won the meet’s outstanding performer award for her win in the 200 and third-place finish in the 60. The men’s outstanding performer was UT-Arlington sprinter Clayton Vaughn, who won the 60 in a national-leading 6.55 seconds.

Notre Dame’s Meyo Mile is one of the most entertaining traditions in college track. Meet officials allow fans to stand in the outside lanes and along the rail, and give them bang sticks and other noisemakers and encourage them to go nuts. The runners travel through a tunnel of sound and excitement. Irish faithful were not disappointed, as Notre Dame’s own Jeremy Rae won the event for the third time (and with an indoor PR and school record to boot).

“It was a big goal of mine to win this meet because it is at home and against teammates,” Rae told UND.com. “My family came and watched, they drove eight hours to watch this, so I put a lot of pressure on myself to win. It is one of the last times that I am going to race for Notre Dame, so I wanted to make it a good one.”

“It is incredible,” said Notre Dame senior Kelly Curran, who broke the meet record in the women’s race, finishing fourth behind three unattached UND and Michigan alums. “You can barely hear yourself think. You just kind of go as fast as possible and know that everyone standing there is cheering for you their hardest. It is a different feeling that you cannot really get anywhere else.”

Attendance was announced as 1,590. Watch to get the full effect.

You may have noticed a trend: highly-ranked teams winning home invitationals. Penn State’s women won their own Sykes & Sabock Challenge Cup, but UConn pulled out a big win over the host Nittany Lions in the men’s competition–and on the final event, too. Leading by three going into the 4×400, the Huskies could win the meet if they finished second or better in the relay. They did, just a step behind Penn State.

“This was a huge team win over a great Penn State team,” Husky coach Greg Roy said, referring to the Nittany Lions’ #7 ranking. “A competition that comes down to the last event like this one did shows how important every individual is to team success.”

Penn State sophomore Brannon Kidder won the 800 in a meet record and national leading time of 1:47.55.

Other national leaders
Other collegiate leaders recorded over the weekend…

MEN
The first star: Ryan Crouser, Texas
Crouser won the shot put at the New Mexico Classic with a distance of 21.23 meters (69′ 8″). It’s eleventh-best in NCAA indoor track history and puts him #4 on the 2014 world list.

The second star: Deon Lendore, Texas A&M
Lendore won the 200 and ran on the winning 4×400 relay team at Texas A&M’s Aggie Invitational. His 200 time of 20.68 is the current collegiate leader.

WOMEN
The first star: Kaitlin Petrillose, Texas
Petrillose broke her PR by nearly four inches with a 4.45 meter (14′ 7¼”) clearance at the New Mexico Classic. Not only is it the best college height of the year, it ties her for #8 on the all-time collegiate indoor list.

The second star: Brea Garrett, Texas A&M
Garrett’s out-of-nowhere weight throw of 22.66 meters (74′ 4¼”) at the Aggie Invitational puts her first in the NCAA by more than a foot, and puts her at #10 on the all-time collegiate list.

The third star: Dezerea Bryant, Kentucky
Bryant picked up a double win at Virginia Tech’s Doc Hale Elite Meet, taking the 60 meters in 7.27 and winning the 200 in a collegiate-leading 22.82.

D-II athlete of the week: Darien Thornton, Grand Valley State
Thornton won the weight throw at the Hillsdale Wide-Track Classic with a distance of 21.18 meters (69′ 6″), which puts him 12th on the 2014 all-division collegiate list–just third in D-II. It’s the best D-II mark of the weekend, though.

D-III athlete of the week: Sean Donnelly, Mt. Union
Donnelly won the weight throw at the Jim Wuske Invitational with a distance of 20.84 meters (68′ 4½”), second-best in D-III history. He missed the record by just eight inches.

NAIA Athlete of the Week: Luc Bruchet, British Columbia
Bruchet may have finished dead last in the 3000 meters at the New Balance Indoor Grand Prix, but his time of 7:56.33 has been bettered by only seven other collegians this year, regardless of division.

CIS Athlete of the Week: Caroline Ehrhardt, Western Ontario
Ehrhardt finished third in the triple jump at Notre Dame’s Meyo Invitational with a distance of 12.88 meters (42′ 3¼”). It’s a CIS leader and thirteenth-best among all North American collegians.

Team Player: Brianna Castrogivianni, Sacred Heart
Castrogivianni won an unprecedented distance triple at the Northeast Conference Championships to lead her Pioneers to the team championship. She won the mile (5:01.49), 3000 (9:51.81) and 5000 (16:58.83) plus a mile qualifying heat, all in the space of two days.