The NCAA outdoor track and field championships continue today with the finals of the men’s competition. You’ll want to bookmark our NCAA championships coverage page for daily previews, recaps and analysis.

Upsets in the 10k
On November 26, 2012, Molly Grabill was driving down an Oregon freeway when a rock tossed from an overpass shattered her vehicle’s windshield and struck her in the face. The rock knocked Grabill unconscious. Her car spun out of control and flipped over. She suffered a broken jaw and other head injuries. Post-concussive symptoms lingered for six months, and she took a semester off from the University of Oregon to recover. Problems included memory issues, braces, and a replacement tooth. One of the men responsible was convicted three weeks ago and is expected to testify against the other.

Last night, Grabill finished fourth in the women’s 10,000 meters, one place ahead of teammate Waverly Neer, and the teammates accounted for an unexpected nine points. They could be the key to the Ducks finally getting over the hump and winning the national title they’ve been pursuing for seven years.

Their success wasn’t the only unexpected result in the race. It was touted as a battle between defending champion Emma Bates (Boise State) and indoor 3k champ Dominique Scott (Arkansas), and Bates made a big move with four laps to go…and then completely ran out of gas. The woman who responded, took the lead and was never challenged was Notre Dame’s Molly Seidel. It was just the third 10k she’s ever run (the first two were the ACC Championships and the NCAA east prelims), and she became the first girls’ Foot Locker high school cross country champion to ever win the NCAA 10k.

Payne wins the clash of titans
Demi Payne (Stephen F. Austin) and Sandi Morris (Arkansas) are quite simply the two best women’s pole vaulters in collegiate history. They were just getting started when Stephanie Richartz (Illinois) tied the old meet record and knew that she was only going to be third. Morris required two attempts to clear 4.60 meters (15′ 1″), as she did at 4.65 (15′ 3″) while Payne kept a clean sheet. Yet another first-attempt miss for Morris at 4.70 (15′ 5″) forced her to pass to a collegiate-record height of 4.75 (15′ 7″), and when neither could make the height the championship went to Payne.

The pair split their six head-to-head meetings this year, they split the two national championships, and they split the collegiate records (Payne holds the indoor record, Morris the outdoor record). If it were up to me, I’d chainsaw the Bowerman Award in half and give each a piece.

Southern Illinois grabs a pair
I was openly cheering for Bowling Green’s Brooke Pleger in the women’s hammer (I’m a BG alum), the woman who led the collegiate list from her first throw of the season, but it was not to be. Defending champion Julia Ratcliffe (Princeton) edged her by ten inches, but DeAnna Price (Southern Illinois) left them both far behind. With the title already clinched, her final throw went out to 71.49 meters (234′ 6″), the third-best in collegiate history, #9 on the all-time US list, and a World Championships qualifying mark. Hitting a PR at the NCAAs is rare in the women’s hammer; only three of the top 25 in college history recorded their college best at the NCAAs.

Freshman shot put sensation Raven Sauders (Southern Illinois) also waited until the final round to unleash her best throw, but in her case it was necessary. She went from fifth to first on her final attempt and broke her own US junior record.

A new long jump star?
Alabama sophomore long jumper Quanesha Burks is on a sharp improvement curve—she’s added two feet just from the indoor season to outdoors—and improved even more to win the championship last night with a wind-aided 6.91 meters (22′ 8″). Just two years ago her PR was an even 20′ 0″, and now she’s closing in on 23 feet.

Javelin goes according to form
The jav has a reputation as an event subject to wild unpredictability, but not last night. The top three athletes on the Track and Field News formcharts were Irena Šedivá (Virginia Tech), Hannah Carson (Texas Tech), and Elizabeth Herrs (Oklahoma), and they finished in that exact order.

Jones scores big
Kansas State’s Akela Jones won the heptathlon with a big 6371 total, fourth-best in collegiate history, and in just her second career attempt at the event. Don’t be fooled, though, as she’s been a multi-talent for a long time. At her old school, Oklahoma Baptist, she was an NAIA pentathlon champ plus an individual champion or runner-up in three events. Georgia’s Kendell Williams went to #7 on the all-time collegiate list in the runner-up position.

The favorite wins, but gets a push
Georgia’s Maicel Uibo was the heavy favorite to win the decathlon and win it he did with a score of 8356. A surprisingly strong effort was put together by Arizona’s Pau Tonneson, who was close enough to make Uibo run an honest effort in the 1500. He was rewarded with a huge PR of 8247, well beyond the World Championships qualifying standard.

Team competition
Going into yesterday’s competition there were as many as seven women’s teams in contention for the championship. The semis didn’t whittle that down much. The teams in the strongest positions are probably Oregon, Texas A&M, Florida and Georgia, but it’s still anyone’s meet.

How to watch: The meet is being covered live on ESPN3.com from 4:00 PT/7:00 ET and live on ESPN from 4:30 PT/7:30 ET. The webcast is dedicated to field events and the telecast will mostly show running events.

Who are the favorites?: This neat little form chart tracker starts with Track and Field News‘ form charts but allows you to change them as you wish and will automatically recalculate team scores. It also updates as events are completed and scored. Its current projections are Oregon 71, Florida 65, and LSU 57.

The schedule: Today is the finals for men’s events. Here is a handy visual schedule of events. 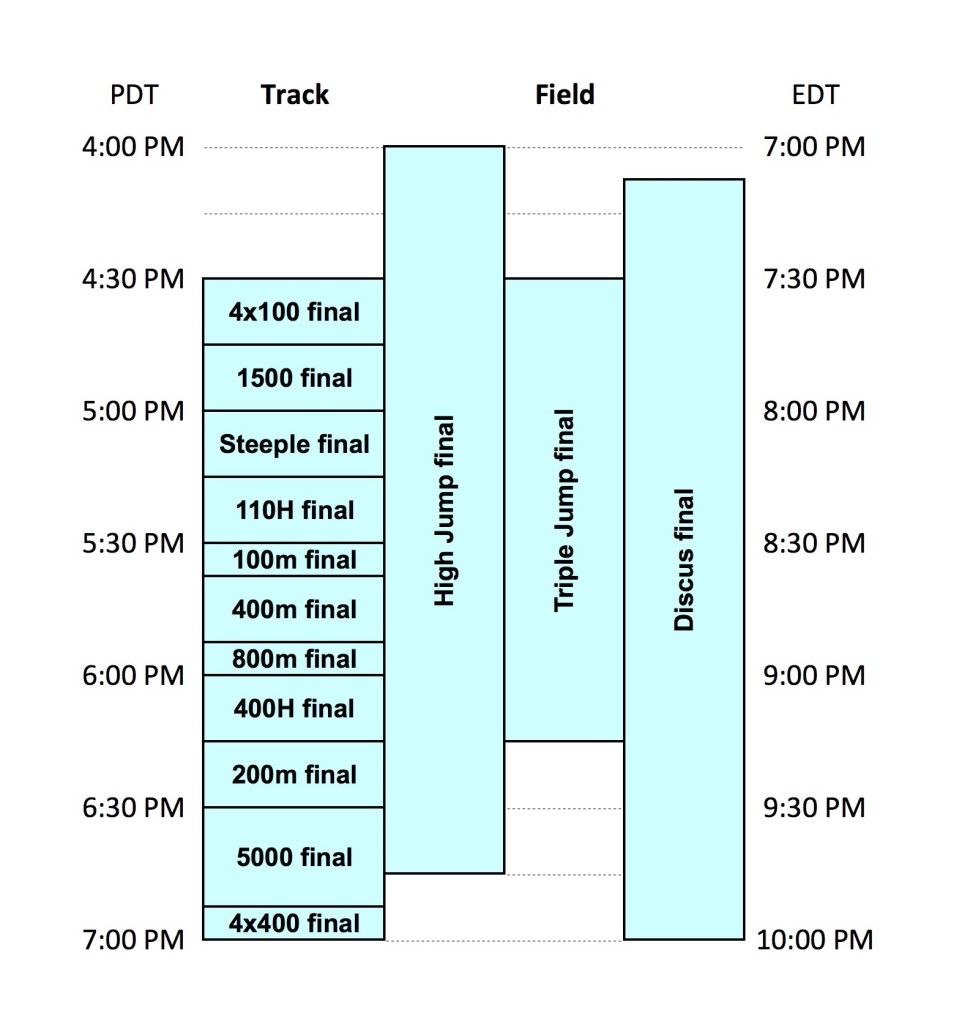 The contenders: Bradley Akins (Texas Tech) cleared the same height as Duffield at the NCAA indoor and only lost on the countback. Basketball star Wally Ellenson (Marquette) has been jumping well too.

The favorite: Rodney Brown (LSU) has six meets this season over 63 meters and the rest of the field totals one.

The contenders: The Virginia pair of Filip Mihaljevic and Jordan Young are probably the next best throwers.

The favorite: Marquis Dendy (Florida) had the world’s two best jumps during the indoor season and hasn’t lost to a collegian in more than 14 months.

The contender: Latario Collie-Mims (Texas A&M) has also crossed the 17 meter mark and sits at #6 on the world list.

Team implications: Anything less than ten points would be a disaster for Florida. Nate Moore is a long shot to score for Oregon.

The favorites: Texas A&M won two of the three biggest races of the year, the Texas Relays and the SEC Championships.

The contenders: Anything can and does happen in the 4×100. TCU ran the fastest time of the year in the semis, and any of an SEC trio of LSU, Arkansas or Florida could win this too.

Team implications: The men’s meet is probably down to Oregon vs Florida, so the Gators need big points here.

The favorite: Villanova’s Jordy Williamsz has the biggest kick and knows how to use it.

The contenders: Cristian Soratos (Montana State) went from “who?” to championship contender during the indoor season. Chad Noelle (Oklahoma State) has the year’s best time.

Team implications: Oregon has three of the thirteen finalists (Washington’s Izaic Yorks advanced on appeal after being tripped in the semis). The Ducks could do some real damage here.

The favorite: Anthony Rotich (UTEP) seeks to become one of the few three-time NCAA champions in this event.

The contender: Stanley Kebenei (Arkansas) was running shoulder-to-shoulder with Rotich at last year’s NCAAs until hitting the final barrier.

Team implications: If Florida’s Mark Parrish could contribute some points it would give the Gators a fighting chance.

The favorite: Omar McLeod (Arkansas) dominated the indoor championship and ran 13.08 in the semis, which is tremendously fast regardless of the fact that it was wind-aided.

The contender: The hurdles themselves are the only thing that can beat McLeod. No one else is remotely close to him.

Team implications: Oregon’s Johnathan Cabral is as good as any other finalist and could be anywhere from second to eighth. Recall that this was the race where last year’s meet went from a struggle to a rout, when the Ducks’ Devon Allen won in an upset.

The favorites: Trayvon Bromell (Baylor) broke Yohan Blake’s world teenage record in the semis with 9.90, but I think Andre DeGrasse (USC) could challenge him.

The contenders: The whole field is good—a 10.09 didn’t make it to the finals—but Bromell and DeGrasse are head and shoulders above the rest.

Team implications: neither Oregon nor Florida have a finalist.

The favorites: Deon Lendore (Texas A&M) and Vernon Norwood (LSU) are third and fourth on the world list.

The contender: Najee Glass (Florida) has also run under 45.00, which puts him in the world’s top ten.

Team implications: Glass and Oregon’s Marcus Chambers are both in the final.

The favorite: Brandon McBride (Mississippi State) won both the indoor and outdoor NCAA titles last year and has the fastest PR of any finalist.

The contenders: McBride was beaten at both the NCAA indoor and SEC outdoor championships and hasn’t run the year’s best time, so maybe the door is open. In that case then Brannon Kidder (Penn State), Shaquille Walker (BYU) and Edward Kemboi (Iowa State) are the ones to watch.

Team implications: Florida’s Andres Arroyo was the last qualifier. As long as he finishes he’ll score, but how much?

The favorite: Michael Stigler (Kansas) is so fast and so consistent that he would almost certainly win a medal if the World Championships were held this weekend.

The contenders: As with the 110s, only the hurdles themselves could beat Stigler. If he falters, Eric Futch (Florida) could be the one to pull it out.

The race of the day. This is the fastest and deepest 200 meter final in NCAA history and the most competitive 200 meter race anywhere in the world this year. It’s likely a battle to the finish between Trayvon Bromell (Baylor), Andre DeGrasse (USC) and Dedric Dukes (Florida), and I think all three will run under 20.00.

Team implications: Dukes needs to give Florida a lead going into the next race.

The duel: Oregon teammates Edward Cheserek and Eric Jenkins have been working together for the sake of the team all year. With this as their last collegiate race of the year, the conventional wisdom is that the gloves come off and they fight for the win.

Team implications: Oregon has four runners in this race and all are capable of scoring. The Ducks could clinch the title here. If they don’t, then they’re going to sweat bullets through the 4×400.

The 4×400 is always a classic race at any championship and that’s doubly true at the NCAAs. If Florida enters the race within ten points of the lead, then they’re running for the team championship since Oregon did not qualify.