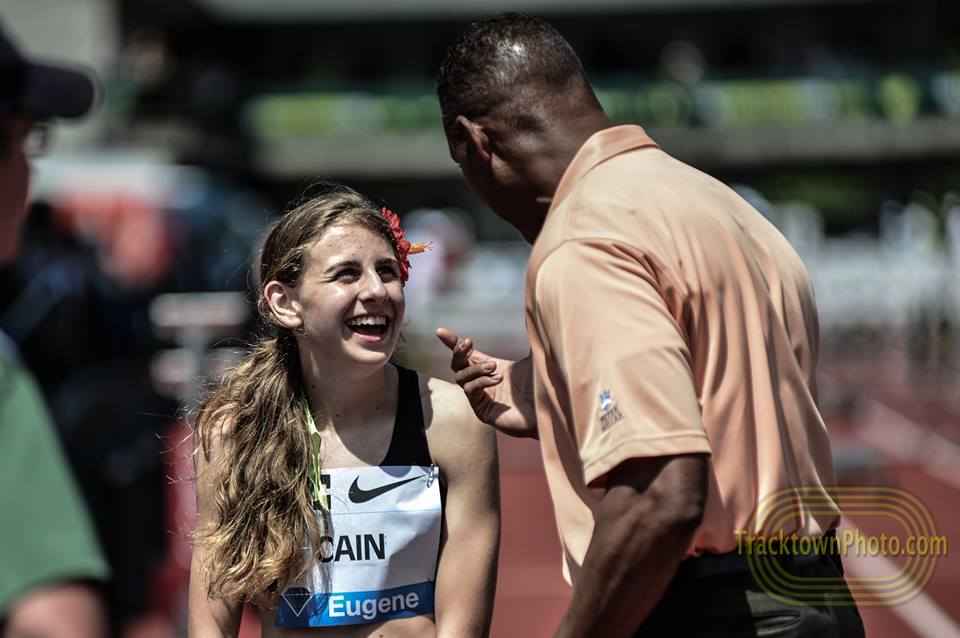 The last time two high schoolers took on and beat the country’s best was fifty years ago. Will it happen again this weekend? (Photo by TrackTownPhoto)

There’s a ton of track and field and cross country action this weekend: big pro meets in New York and England and Ukraine, cross country championships in Colorado and Kenya, college invitationals all over the place, and long-standing traditional college triangulars. The list of great matchups is long.

I’m going to highlight the ones that fans can watch on TV or online, beginning with the biggest matchup of the week.

Think back to a year ago at this time. Mary Cain was already known as a top high schooler, and in January she broke a national high school record at the University of Washington and beat a few good pros in the process. That earned her a spot in the 2-mile at the New Balance Boston Indoor Games, where she finished a highly-respectable third and broke another national high school record. Then at the Millrose Games, she battled for the win and narrowly came up short. That’s where she changed from a great high school runner to a bona fide star, and from there it only got better. She is now legitimately one of the best milers in the world, at just 17 years old.

If you had asked me in June “how long will it be until one of Cain’s high school records is broken?”, I can’t say what my answer would have been but it would not have been “eight months”. Aside from an entry in the Boston pro meet, Alexa Efraimson is where Cain was at this point last year. In January she broke Cain’s 3000 meter record by two seconds, at the same track and one year later. She’s sixteen years old and has great finishing speed, just like Cain. In the fall, she beat the woman who ended up second in the NCAA cross country championships. It’s unreasonable to expect anyone to become the next Mary Cain, but Efraimson is on the same path.

So the Running Times headline touting their matchup is more than just hype. Few expect Efraimson to challenge Cain on Saturday, but few expected Cain to challenge the best pros before last year’s race. The only other time two high school distance runners simultaneously drew this much attention was fifty years ago, when Jim Ryun and Gerry Lindgren both made the Olympic team–but they didn’t run the same event. These two do.

Berry and McCall are the year’s top weight throwers. McCall holds a 2-1 edge in their three meetings so far in 2014, but Berry is the defending national champion and has the year’s best throw. Also entered is Amanda Bingson, the American Record holder in the hammer throw.

Harrison (Kentucky) and Stowers (LSU) lead the 2014 collegiate list in the hurdles. Baylor’s Tiffani McReynolds and Texas Tech’s Le’Tristan Pledger are entered, which means all of the NCAA’s top four are here. This will be the first meeting between Harrison and Stowers this year. Stowers was 3rd at last year’s NCAA indoor championships but Harrison has made huge improvements since transferring from Clemson to Kentucky.

These are the bronze medalists from the 2013 World Championships (Porter) and the 2012 Olympics (Wells), but neither is really setting things on fire so far this season. They were 5th and 4th, respectively, at the Düsseldorf PSD-Bank Meeting two weeks ago.

These are three of the five or six best milers in the world right now; Birgen and Kiplagat are 3rd and 4th on the world list, and each has won a major indoor meet within the last two weeks.

Carter recently recorded 6.52 for 60 meters, but you won’t see it on any indoor lists because he ran it outdoors in Jamaica. Dasaolu is second on the world list and undefeated in two meets, twice running 6.50. Other contenders include Mike Rodgers and the ageless Kim Collins.

The indoor 2 mile world record is 9:06.26, by Ethiopia’s Meseret Defar in 2009. Dibaba has been on a historic tear as of late, breaking world indoor records for 1500 and 3000 meters, and she’s going for the trifecta here. Dibaba’s 3000 meter record, set just eight days ago, suggests she’s capable of breaking the 9:00 barrier. Record attempts can be tricky things but she’s obviously in condition to pull it off.

These are the last two USA cross country champions, Derrick in 2013 and Mack in 2012. Brent Vaughn (the 2011 champion) makes three but he had a fairly rough 2013 season and isn’t likely to be a factor for the win. Derrick and Mack are also the only two entrants returning from last year’s amazing silver-medal winning team at the World Cross Country Championships, the 2nd and 4th runners on the team. Derrick is the favorite, but Mack is hardly chopped liver.

This is how good an athlete Ashton Eaton is: he’d be an Olympic or Worlds hurdler for any nation other than the USA, and would have a fighting chance at making the final. Here he’s taking on some very good hurdlers, including former NCAA champion Andrew Riley, and he could win it. It wouldn’t be the first time he beat specialists at their own game; he won the 2012 US indoor long jump title, too.

Remember how these two finished the 5k at the 2012 Olympic Trials? They hawked down Julia Lucas from behind, with Conley just nipping her at the line for a spot on the Olympic team and D’Agostino missing it by less than a foot.

D’Agostino is now the queen of college running, with a win streak against collegians over a year long (even longer when restricted to the track only). Conley is on a hot streak herself with a huge mile PR and an easy win in the 2000 at last week’s New Balance meet.

Drouin’s only equal among North American jumpers is Erik Kynard, who is saving his efforts for next week’s USATF Championships. The meet record of 2.34 meters (7′ 8″) is his competition. Set in 1985 by Jimmy Howard and tied again in ’86, the only older Millrose Games record is Carl Lewis’ amazing 8.79m (28′ 10¼”) long jump from the year before.

The 2000 meters is a weird distance and that by itself makes the race unpredictable. Lagat is always one of the favorites in any race he enters. “Bumbi” ran a great 3000 meters last week (7:37.62) and figures as Lagat’s biggest challenge–but is the distance too short for him? Canada’s Cam Levins could be a factor as well. The American Record is 4:58.6, set by Steve Scott way back in 1981.

Sowinski and Rutt battled to the finish in the 4×800 at last week’s New Balance meet, both anchoring their teams under the old world indoor record. Both are clearly in great shape right now. Symmonds also ran in that race but wasn’t in a position to really test himself. While he’s presumed as the favorite, the other two are running extremely well and either could come out the winner.

Hindriksdottir was the 2013 World Youth (U18) champion and currently ranks 8th on the world list. Wilson was the 2012 World Junior (U20) champion and sixth at last year’s World Championships. Based on current form, Hindriksdottir is the favorite to win this race of young stars billed as the “Road to Rio”–Wilson hasn’t run well yet this year.

Willis won the mile at last week’s New Balance meet, and NCAA indoor mile champion Lalang recently ran an excellent 7:44.20 for 3000 meters. They’d have to be considered the favorites. The man who will get the most pre-race attention is Alan Webb, who is making this race his farewell from the track before switching to triathlon.

Fleet is the defending NCAA champion at 1500 meters and Creese was sixth, just a few steps out of first. This is a deep race and includes Brannon Kidder, the collegiate leader at 800 meters.