EUGENE, Ore. — Galen Rupp winning his eighth straight U.S. 10,000m title was the top storyline at the U.S. Olympic Track and Field Trials on Friday, but the two men who finished behind him to make their first Olympic team, Shadrack Kipchirchir and Leonard Korir, have their own stories tell.

Kipchirchir (second in the 10,000m), Korir (third) and Paul Chelimo (who is running the 5,000 here and made World Indoors in the 3,000) are the fruit of the U.S. Army’s World Class Athlete Program. They’re coached by 2004 Olympian Dan Browne, who told The Oregonian’s Ken Goe before the meet that he’d let his runners’ performances do the talking. Browne was happy to give them the credit again Friday night.

“The total force of the U.S. Army is proud of them today,” he said. “I’m so pleased that they came through and they accomplished their dream.”

On an 85-degree evening, Kipchirchir and 41-year-old legend Bernard Lagat were the only two athletes to cover Rupp’s second surge halfway through the race. Rupp strung together seven straight laps of 63-65 seconds, which shredded the field. Lagat, after getting water on the backstretch a few laps into Rupp’s surge, stopped and lay down on the ground, leaving Kipchirchir as the only one within striking distance of Rupp. Lagat later withdrew from the race.

Kipchirchir, who finished fourth in this event last summer, even pulled ahead of the 2012 Olympic silver medalist with a lap to go, though Rupp put him away over the final 200m.

“They’re very good in warm-weather conditions,” continued Browne, who had a training block with his runners at altitude in Mammoth Lakes, California. “We prepared well for it — we did some of our workouts in warm parts of the day when it was even windy. Mammoth can be a stressful place to train – it can be very dry it can be very warm in the day.

“I told them, ‘You gotta be tough out there — conditions aren’t going to be ideal, but we’ve been there and done that.’”

Korir, who only finished Army basic training earlier this year, spent most of the race in a second group, one that at times included Hassan Mead and Ben True, two of the top contenders to make the team. Mead became the first from that group to try to bridge the gap to the leaders, and he took third place when Lagat withdrew.

“With my training with the army, they are always telling me, ‘Don’t give up,’” said Korir. “When I saw those three guys, and I was running with Hassan Mead, I told myself, ‘Don’t worry, keep trying. We had like eight laps to go.”

Korir soon pulled even with Mead, who faltered in the heat and like Lagat ended up prone on the track. Mead would jog through a few more laps before ending his day with a lap still to run.

“I knew Shadrack was going to run well,” said Browne. “I was very hopeful that Leonard would run well.

“For [Leonard] to get it done at this level with such a short timeline, it just shows how focused he is and how talented he is.”

Kipchirchir starred at Oklahoma State and Korir at Iona before joining the World Class Athlete Program, whose mission, says Browne, “is to place soldiers at the top level of national and international competition, ultimately leading to the Olympic Games.”

What does their coach say is the next step for these two soon-to-be Olympians?

“Go after the medals and Rio.”

Of the events that had their first rounds Friday, the women’s 800m weren’t stunning like the men’s 800m and wasn’t as star-studded as the women’s 400m. Observers, though, may have witnessed the first step in a three-race journey to redemption for two women who have just missed the last three U.S. teams in this event.

Molly Ludlow, who placed fourth in both 2012 and 2015, was the most impressive performer in the event, going out hard with front-runner Alysia Montano, splitting 58.11, before finishing strong at 2:00.30.

But did she exert too much energy with two more hard races to go, Saturday and Monday?

“It’s easy to stay in the back and save all your energy, but then people fall,” said Ludlow. “I’m not going to risk that — you only get one shot at this.”

Kate Grace, whose intuition led her to choose the 800 over the 1500 this summer, was another fast finisher Friday. Grace, who placed fourth in 2013 to just miss the Moscow World Championships, was only fifth through 400m but ran the fastest last 200 in any of the heats to win in 2:01.36.

“Coming back from injury lit a fire in me last year,” said Grace, who had her foot immobilized for two months in early 2015 and didn’t race on the track all year. “I’m pumped to be racing right now. I feel like I’ve found a mojo again in racing.”

The women’s 800m is deep. Ten women broke 2:02 on Friday, and that doesn’t include 2014 U.S. champ Ajee Wilson, who controlled her race from the front, leading at each 200m split and finishing in 2:03.31. High school starlet Sammy Watson finished third in Wilson’s heat, but her time wasn’t fast enough to qualify.

Montano, the six-time U.S. champ, had the second-fastest time of the day, finishing second to Ludlow at 2:00.56. Brenda Martinez, a Worlds medalist in 2013, also appeared fit, running the fastest second 400 of any woman Friday at 61.01. Chanelle Price (2014 indoor gold medalist), Raevyn Rogers (two-time NCAA champ) and Phoebe Wright (1:58.22 PR) are three more decorated women who ran under 2:02 on Friday but didn’t even win their heats.

With so many capable of running near or below two minutes, an Olympic contender was bound to miss out on Saturday’s semis, and so it was for Laura Roesler, whose 2:03.55 in one of the two slow heats was only good enough for fourth and not nearly fast enough to advance her on time.

“I was in a good spot, no traffic, off the shoulder of the leader,” said Roesler of her tactics. “I came off the turn well, but people were just finishing well.” 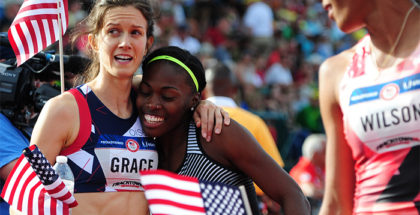