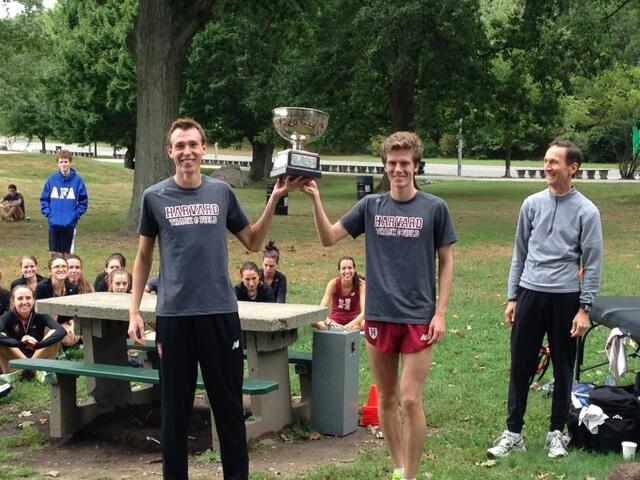 From a team perspective, the top men’s battle of the weekend was at BYU’s Autumn Classic, where the #4 Cougars faced off against the #8 Portland Pilots. The two teams have become rivals since BYU joined the West Coast Conference two years ago and broke the Pilots’ streak of 32 straight WCC titles. Portland turned the tables last year, beating BYU at the conference meet by a single point.

While there were two other teams in the race (Weber State and Idaho State), it was in essence a dual meet. BYU took the win with a 1-2-5-8-9 finish, and managed to put seven runners in front of Portland’s fifth. The individual victory went to the Cougars’ Taylor Thatcher, who was 14th in June’s NCAA 10k. Portland’s top runner was Scott Fauble, who was 26th at last fall’s NCAA championships. BYU rested top runner Jared Ward and a few others, and it’s still very early in the season, so the meet results should be taken with a grain of salt. But a win over a rival is still something to celebrate.

The century mark. Another great rivalry celebrated a milestone this weekend: the 100th edition of Harvard vs. Yale. The first was in 1907 and it became an annual affair in 1922. The Crimson won for the 60th time (to Yale’s 40) with a 15-42 drubbing of the Bulldogs. The women’s race was the 38th annual meet, and Harvard won that race too by the score of 20-39. The meet was hosted by Harvard at Boston’s historic Franklin Park, which celebrates its own milestone: this is the park’s 100th year of cross country racing. Franklin Park is the only existing American venue to have hosted an IAAF World Championships of any kind, the ’92 World cross country.

Upset? At Kentucky’s Bluegrass Invitational, men’s #1 Oklahoma State took a tumble, finishing second to #11 Eastern Kentucky. A huge upset? No. Remember, teams cannot earn points for at-large qualifying to the NCAA Championships until September 27, making this the functional equivalent of an NFL pre-season game. Who wins this weekend is a matter of pride and nothing else. Oklahoma State ran its B-team, and maybe not even the best B-team it has. Eastern Kentucky ran just two of their best runners but that was enough for the win.

By the way, the mere existence of the Bluegrass Invitational is no small matter. It was the Wildcats’ first home cross country meet in six years, and the first in the regular season in nearly two decades. New head track/XC coach Edrick Floreal came in to revive a moribund program with a can-do attitude, and that includes trying to build some semblance of a fan base. That’s not really possible without home competition, and there hadn’t been much of that until the last twelve months. Floreal also knows that your fans have to have something to cheer for, and women’s distance coach Hakon DeVries let All-American Cally Macumber go with guns blazing for the win. “Today was a great day for our athletes to perform on home-terrain where they know the course in front of their friends and family,” said Floreal. DeVries concurred, saying “to have a new home meet out here where Cally takes the first title is exciting.”

Every week I’ll rank my top ten runners in the NCAA. You might wonder how I’m ranking them–by how good they are right now? By how good they’ll be at the NCAA Championships? By recent results? The answer to this multiple-choice question is d) All of the above.

MEN
1. Kennedy Kithuka, Texas Tech. The defending champion is still undefeated in his NCAA cross country career (and has lost just once in track).
2. Lawi Lalang, Arizona. Dude ran 13:00.95 over the summer.
3. Anthony Rotich, UTEP. 4th last year, NCAA steeplechase champion.
4. Paul Chelimo, UNC-Greensboro. A major talent who has finally been injury-free for an extended period of time.
5. Eric Jenkins, Oregon. He has some very fast track times to his name. Will they transfer to cross country?
6. Tom Farrell, Oklahoma State. Leads the undisputed #1 team in the country.
(Late edit: he’s not eligible this year.)
8. Andrew Colley, North Carolina State. 16th last year.
9. Brian Shrader, Northern Arizona. 15th last year but did not run indoor or outdoor track.
10. Taylor Thatcher, BYU. Earns a top ten spot after this weekend’s win over Portland’s Scott Fauble (26th last year).
Question mark: Parker Stinson, Oregon. Has been really good in track, not as much in cross. Is this the year?

Men’s athlete of the week: Kennedy Kithuka
He won the Texas Tech Open by a minute and 27 seconds. Yes, the competition wasn’t very tough, but that’s an awfully big win, nearly 500 meters.

Men’s team of the week: BYU Cougars
The Cougars win at their own Autumn Classic over WCC rival Portland was the headline story for a reason.

Women’s athlete of the week: Abbey D’Agostino, Dartmouth
She won the Big Green’s own Dartmouth Invitational by 51 seconds. This was closer than Kithuka’s win (only about 250 meters) but over a shorter distance and significantly better competition.

Women’s team of the week: Washington Huskies
#1 Providence won a quad meet at Stony Brook with ease, but the Huskies were more impressive in winning their own Sundodger Invitational. Resting many of their top runners, they still put four athletes in front of indoor All-American Hannah Kiser.

Course of the week: Pepperdine Alumni Park
The Pepperdine Waves hosted a meet on Saturday at their Alumni Park. The park is bordered on two sides by Malibu Canyon Road and the Pacific Coast Highway, and the finish line was just a few hundred meters from the Pacific Ocean. Does anything more need to be said? Pepperdine will host the West Coast Conference Championships in November.