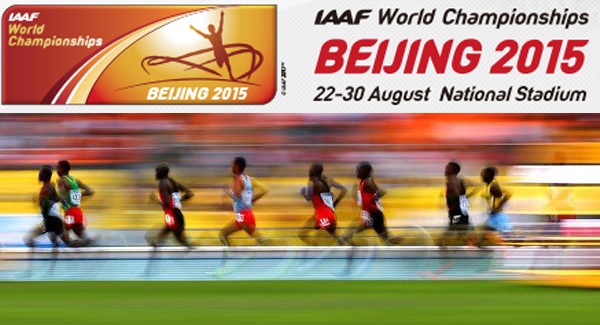 The IAAF has released entry standards for the World Championships, Beijing 2015. I’ve taken the time to look at the changes, go into further detail about who’s already qualified and translate some of their document by committee into concepts and scenarios with the North American track fan in mind. (Yes, I live in Canada and follow the sport up here so I said North American).

Changes & “Qualified” Athletes
There are some important differences to note when it comes to individual qualification & a great number of athletes have already met the entry criteria set down the IAAF. As always, athletes will also need to meet the standards set by their track and field governing bodies before booking their trip to Beijing. (The following numbers correspond to the IAAF qualification system for individual athletes)

The Mile isn’t all the back, but the folks over at Bring Back The Mile may be happy that the Mile can now serve as an IAAF qualifier for the outdoor 1500m. 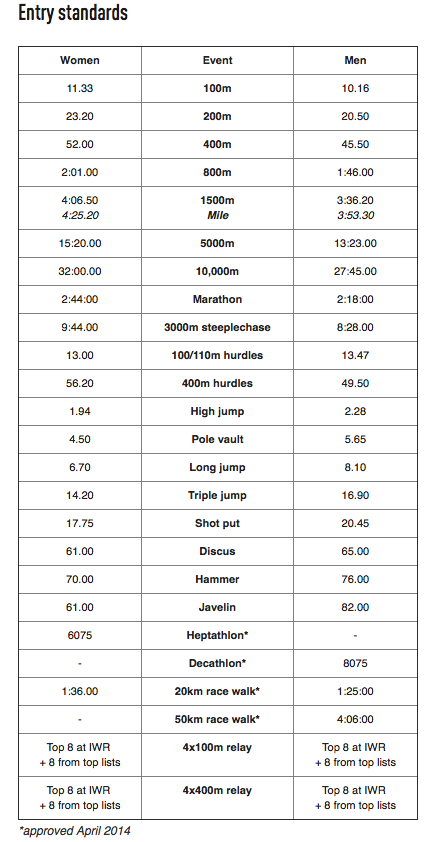 2. Lots of ways to “qualify”
Athletes will also be considered qualified and having attained the entry standard if they:

– Win their area championship (excluding the marathon). Winner of the USA or Canadian Championships.

– For the 10,000m it’s pretty straightforward, the top 15 athletes finishing in the senior men’s and women’s races at the IAAF World Cross Country Championships, Guiyang 2015.

3. Countries can still send 3 & sometimes 4 athletes
Each country may send 3 or 4 athletes with inclusion the IAAF Diamond League Champion or reigning World Champion in their respective event. If a country has both, they can only designate one as a wild card. For example, Brianna Rollins won the World title in 2013, but Dawn-Harper Nelson won the 2014 Diamond League. The USA can only pick one of the two for the wild card spot.

4. How will being “best ranked” help you get to Beijing?
There is also the opportunity for athletes (not in the 5000m, 10,000m, marathon and race walks) to fill open spots based on being a “best ranked” athlete. Not sure I quite grasp what this means. Does this open up an opportunity for Kenyan men to fill up spots in the men’s Steeplechase, if the IAAF is not able to fill up the event? If there is a limit of 3 athletes per country (or 4 with DL Champ or reigning world champ), I am having trouble figuring out how this provisional will apply.

Update 11/20/2014: After a night of thought and sleep, it appears this provision will apply when the new standard is met by less athletes than how many the IAAF wants to fill the field. For example, if only 13 women get the new high jump standard and the IAAF wants a field of 20. The IAAF will then look at performance list to select jumpers to fill up the spots. Not sure how often this provision will come into play but could set up some interesting opportunities for athletes that bomb at the national championships but have a high qualifying mark. It’s possible that someone with standard, does not finish in a qualifying spot at their area championships but get’s trip to Beijing under this provision. I guess we’ll have to wait and see.

Let us know what you think of the new entry standards for the IAAF World Championships, Beijing 2015 in the comments? And feel free to discuss any interesting scenarios that you think may pop up.