What 2 Watch at the Olympic Trials: Wednesday

Today will see the hammer throw staged inside Hayward Field for the first time ever, and qualifying and finals in that event will comprise the entire day’s action. 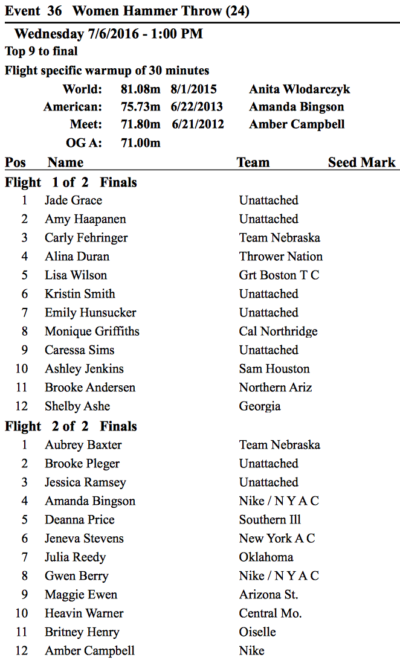 In a nutshell:
Gwen Berry (Nike/New York AC) set an American Record this year and then had it taken away in an odd series of events. She has a history of doing poorly at the national championships, but had been at another level before her 3-month suspension. All eyes will be on her.

Amber Campbell (Nike) is a two-time Olympian, the defending national champion, and tied her PR this year. In light of all of that, she should probably be the favorite.

After that it’s probably a fight for third between three women: DeAnna Price (Southern Illinois), Jeneva Stevens (New York AC), and Amanda Bingson (Nike/New York AC). Price is the NCAA champion and has been on a hot streak. Bingson has been as much of a media darling as is possible in the women’s hammer throw, but her results of the last two years are well down from where they had been.

Complicating factor: only the five women above have achieved the Olympic qualifying mark of 71.00 meters (232′ 11″).

The men will follow the same procedure, with two flights of qualifying at 5:00pm local time (8:00pm Eastern) and nine finalists advancing to a final at 7:00pm (10:00 Eastern). 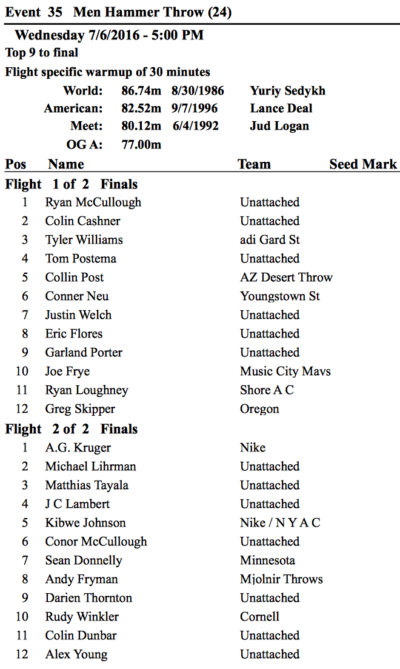 In a nutshell:
Kibwe Johnson (Nike/New York AC) and A.G. Kruger (Nike) basically own this event in the USA. One or the other has won all of the last ten US championships, and expect more of the same.

A third athlete is beginning to approach their competitive level, Conor McCullough. Last year was a good year for him, with a win at the NCAAs (for USC), a runner-up at the nationals, and just 20cm (8 inches) from making the finals at the Worlds.

Complicating factors: No one has achieved the Olympic qualifying mark of 77.00 meters (252′ 7″). Well, one has, maybe. That’s Rudy Winkler (Cornell), who threw 77.78 meters at an obscure meet in New York. But there are questions about its legitimacy and USATF has yet to accept the mark. The Olympic standard is so difficult to achieve, and so few athletes worldwide have hit it, that the top non-qualifiers will get invitations to fill out the field. All three favorites above are in line to get those invitations.