What 2 Watch at the Olympic Trials: Thursday

Today begins the second weekend of action at the US Olympic Trials and everything you ever needed to know about it is right here.

The meet more or less is in a restart after some off days, so there are just three finals today: the women’s shot put, triple jump, and steeplechase. 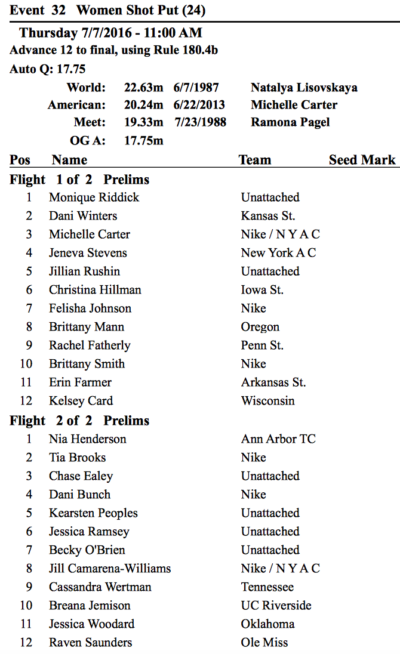 In a nutshell:
The USA has two legitimate stars in Michelle Carter (Nike/New York AC) and Tia Brooks (Nike).

Carter won bronze at last year’s outdoor Worlds and gold at this year’s indoor Worlds. She seems to be saving some gas for the Olympics and has thrown just twice since the indoor Worlds and not up to her usual standards either time, so there are questions about her current form. Brooks has two Diamond League wins this year and ranks #2 on the world list, and not only rates as the favorite here but should be considered a contender for Olympic gold.

Raven Saunders (Ole Miss) rates as probably the best of the rest. She’s still very young by shot-putter standards and the stress could get to her. Jillian Camarena-Williams (Nike) is not young, but has been climbing the ranks since returning to competition last year after maternity leave and could upend the apple cart.

Complicating factors: none. All of the top contenders have achieved the Olympic qualifying mark of 17.75 meters (58′ 3″). 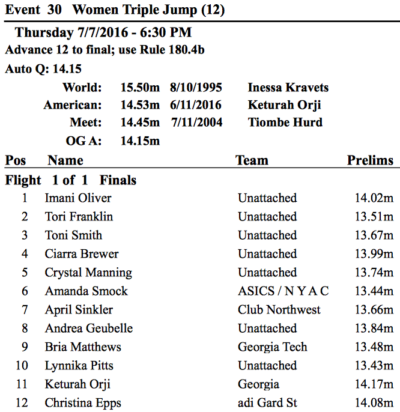 In a nutshell:
The strongest favorite in the entire meet has to be Keturah Orji (Georgia). The college sophomore broke the American Record at the NCAA Championships, which followed up on an indoor season where she finished fourth at the World Indoor Championships. She has made significant improvements since last year, when she was second to Christina Epps (adidas Garden State TC) at the US Championships. She is the USA’s first real international contender in this event in a very long time.

Epps and Andrea Geubelle are the best of the rest. Epps set her PR in that nationals win last year, and Geubelle recently achieved the Olympic qualifier.

Complicating factor: the Olympic qualifying distance of 14.15 meters (46′ 5¼”) will have more to do with who makes the Olympic team than the final standings. As of now, only Orji and Geubelle have hit it. The situation is such that it is unlikely any extra invitations will be extended by the IAAF, so Epps must add 6 centimeters (2 inches) to her PR or she’ll stay home. And, as we saw in the men’s long jump, a strong tailwind could complicate things further. 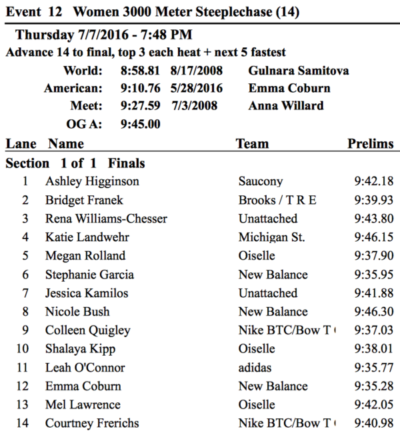 In a nutshell:
Referring to Emma Coburn (New Balance), Let’s Run says “barring an act of God, she’ll be on the team”. She broke the American Record at the Prefontaine Classic in May and it seems like forever since she lost to an American in this event. Just now she has even crossed over into celebrity status.

Leah O’Connor (adidas) was fourth at last year’s US Championships after falling at the final water jump. She is vastly improved at all distances this year; her 9:18.85 at the Pre Classic makes her the third-fastest American in history, and she’s set PRs at 1500 and 5000 as well.

So that makes two who are considered strong favorites, but what about third? The leading candidate is Courtney Frerichs (Nike/Bowerman TC), who finished up her college career last month with a collegiate record at the NCAA Championships. Two others to watch include Stephanie Garcia (New Balance) and Ashley Higginson (Saucony/NJNYTC). Garcia was second at last year’s US Championships and her year-old PR is marginally faster than Frerichs’ month-old one.

Complicating factors: only the barriers, which occasionally do take someone out on the final half-lap. All of the top contenders have achieved the Olympic qualifying mark of 9:45.00, and it’s virtually unthinkable that anyone could finish in the top three without running at least that fast.