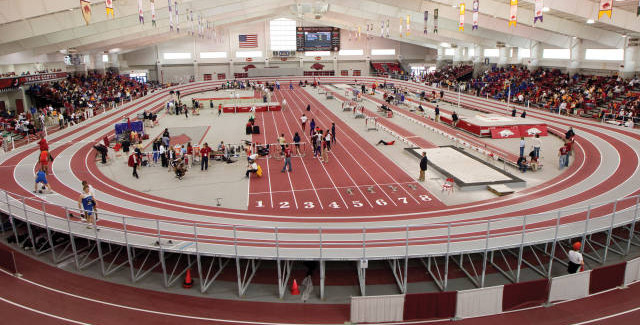 The action will come fast and furious this weekend. There are four national collegiate championships, the NCAA’s three divisions plus Canada’s national meet. There are a bunch of major road races, two US championships (15k and marathon) plus the NYC Half. There is even an overseas championship of sorts.

Here are your extraordinary eighteen best matchups of the weekend. What’s #1?

The Florida Gators rated as slight favorites going into last year’s NCAA Outdoor Championships and ended up scoring more points than expected. Unfortunately for them, so did Oregon. The Ducks broke the scoring record and Florida put up by far the best score ever by a team that didn’t win. The two teams face off again, although under very different circumstances.

2. Oregon vs the streak

On the women’s side of the competition, the Ducks have won the indoor national championship for five straight years. That ties the record set by LSU from 1993 to 1997. Continuing that streak looks unlikely right now; Arkansas rates as a rather heavy favorite, and the projections are that the Ducks will need to run well just to finish in the top four and win a trophy. But championship meets can be funny; Oregon’s men were barely on the radar for a team title going into last June’s outdoor meet but ended up breaking the scoring record. The Ducks have twelve qualifiers, none of which are projected to win, and that means they have a lot of upside available. As Fats Waller said, “one never knows, do one?”

Championships are supposed to make #1-versus-#2 matchups happen, but rarely is it #1 and #2 of all time. That’s what we have here; Sandi Morris (Arkansas) and Demi Payne (Stephen F Austin) both broke the collegiate record this season. Indoor record yes, but they’re also both well above the outdoor record. The two of them account for nine of the ten best marks in NCAA indoor history. It’s not one-sided either; they split their two head-to-head meetings. This is the event of the year by far, I just hope that the production company hired by ESPN can give it the attention and respect it deserves.

The NCAA’s three division have their championship this weekend and so does Canada’s collegiate association, the CIS. It’s an easy trip for anyone in the Detroit area since the University of Windsor facilities are within a javelin throw of the Ambassador Bridge, so close to the border that you can pick up US mobile phone service.

The men’s 3000 at the Ontario championships two weeks ago was the source of much controversy. The Guelph Gryphons have by far the strongest and deepest group of distance runners in Canada, and they attempted to set up a wall at the front of the race and block other runners from passing. One Guelph runners was disqualified, and I’d guess that others likely would have if subject to the rather strict US interpretation of “interference”. The entire incident led to a rather lively discussion of the difference between what’s allowable by the rules and the difference between what’s allowable and what’s in sportsmanship.

Now the Guelph runners are up against a formidable opponent in Charles Philibert-Thibouto (Laval), who will be doubling back from the 1000 held just an hour and 40 minutes earlier. There’s a larger prize at stake as well, and that’s the team championship. Guelph is one of several favorites, as is the home team, the Windsor Lancers. This is Guelph’s best chance to pile up points.

Ches vs the Triple, part 1

Oregon’s Edward Cheserek is scheduled to run three events this weekend in pursuit of a team championship for his Ducks. It’s hard to imagine that he’ll be anywhere but on the anchor leg, which will be his second race of the day (mile semifinals are three hours earlier). The toughest competition is likely to come from Villanova and Georgetown.

Hastings vs Rhines vs Thweatt

There are obviously a lot more women entered in the elite race than these three, but this is who I see as the major contenders for the win. All are coming off of a win; Amy Hastings (Brooks) won the Rock N’Roll Arizona half marathon in January in 1:12:04, the ageless Jen Rhines (BAA/adidas) won the Publix Gasparilla Distance Classic half marathon three weeks ago in 1:12:34, and Laura Thweatt (Boulder Track Club) won the USA Cross Country Championships last month.

While this is an early season competition and one without much on the line—it’s almost like a dressed-up version of spring training—it’s still a matchup between the two titans of the event, Olympic champion Krisztian Pars (Hungary) and World champion Pawel Fajdek (Poland).

UW-La Crosse has never won the women’s indoor championship; last year was their fifth time as runners-up. UW-Oshkosh has won the indoor title nine times, including last year. The USTFCCCA computer rankings indicate that La Crosse will finally get over the top, but that it will be very close. If it comes down to it, they both have teams qualified in the 4×400.

The teams expected to battle it out for the win in the men’s D-II championship are familiar foes. Findlay, Grand Valley State and Ashland are all members of the Great Lakes Intercollegiate Athletic Conference and regularly face off against each other. Findlay will likely be behind for most of the Saturday finals, but they have four qualifiers in the shot put which begins at 5:00pm (6 ET). GVSU and Ashland have two qualifiers each too, so this could be the event that determines the championship.

Quigley vs Houlihan vs O’Connor

This is leg two of Edward Cheserek vs the triple, and it looks like the most difficult opposition. Soratos is a newcomer to the national stage out of Montana State and has a couple of very good races to his credit, but Ches is Ches. Later this afternoon, Ben Enowitz will explore this matchup for us in detail.

Okolo vs Spencer vs Little

Shamier Little (Texas A&M) is the top qualifier and already has an NCAA title to her credit (400 hurdles, last June), but she’s up against Courtney Okolo (Texas), the outdoor collegiate record holder, and Ashley Spencer (Texas), the two-time NCAA outdoor champion. This event could make or break the Longhorns’ pursuit of the team title; they could go 1-2-3 (with Kendall Baisden) but then again, weird things can happen in an indoor 400.

Bromell vs Teeters vs Givans

Trayvon Bromell (Baylor) was the sprint superstar of the 2014 outdoor season, but as is often the case with true 100 meter sprinters, he’s good but not great at the 60. He and John Teeters (Oklahoma State) waged a proxy war of times throughout the regular season and were expected to battle for the win at the Big 12 Championships. They were both upset by Senoj-Jay Givans (Texas). This is the rematch.

The list of favorites in the women’s 3000 meters is a long one: Emily Sisson (Providence), Shelby Houlihan (Arizona State), Erin Teschuk (North Dakota State), Dominique Scott (Arkansas) and Rachele Schulist (Michigan State). Of the bunch, only Schulist will come to the start line without another race on her legs. Sisson is in Friday’s 5000, Houlihan and Teschuk are in Saturday’s mile (with Friday heats), and Scott is in Saturday’s distance medley. Sisson and Scott are the favorites based on the fast times they’ve recorded, but I think it would be foolish to discount Schulist. None of the above beat her at the NCAA cross country championships last fall.

Cheserek vs the Triple, part 3

There’s always a chance that Edward Cheserek gets pulled out of this race. If Oregon has the meet already won or already lost, there would be no point in running the team’s biggest star ragged. But it’s hard to imagine a situation where the team title is decided before this race begins, because Oregon has five athletes entered and all could score. A one-two finish by Cheserek and Eric Jenkins is more or less expected, and piling up 25 or more points right here is well within the realm of possibility.

Texas A&M might be missing Deon Lendore, who came up hurt at the SEC Championships, but they’re so deep that they could win this race without him anyway. The Gators have three national qualifiers in the individual 400, so they are in the hunt—and they just might need ten points for a team championship. Besides, the 4×400 relay is the most exciting three minutes in sports.

Women’s race, United Airlines NYC Half Marathon
Sunday, 7:00am
Live webcast at WatchESPN from 7:00am

Halls vs the marathon

How long has it been since Ryan Hall (Asics) broke 2:17 for a marathon? Would you believe more than three years? His last respectable result for the 42.2k distance was at the 2012 Olympic Trials. I certainly hope he returns to form, but the truth is that the vast majority of elite marathoners run well for just a few years and when they fall off the top they never return. Sara Hall, on the other hand, has been on a tear since she started running half marathons last summer. This is her first full marathon and I would not be surprised to see her compete well. And then there’s the heat; temperatures will be in the 70s for most of the race and could rise into the 80s before the pros hit the finish.