The Boston Marathon, Then and Now

Somewhere along the line, I came into possession of a flyer for the 1974 Boston Marathon. The changes that have taken place in the last 40 years are remarkable. I’m having scanner issues at the moment, so a photo will have to suffice. Click to enlarge. 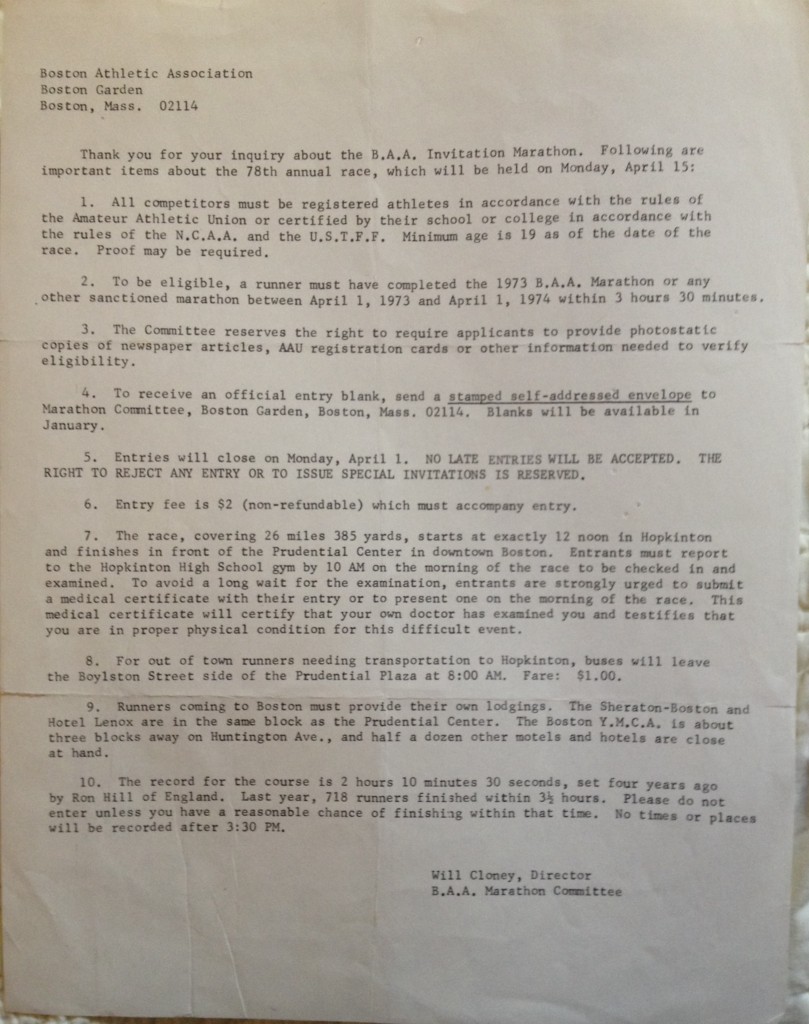 Some of the changes…

Entry fee: $2 (plus $1 if you need a bus ride to the start). That’s roughly $9.50 in 2014 dollars. It’s a far cry from the $175 it cost for this year’s race–but then again, there were no road closures, no security, little support, and few amenities besides a bowl of beef stew at the end of the race.

Entry requirements: The qualifying time was nominally 3:30 but proof did not need to be submitted unless asked for. You did, however, have to be an AAU (now USATF) member or run for a college team, and a pre-race physical or proof of same was required.

Cutoff time: They took down the finish at 3 hours and 30 minutes. Only 714 runners made it the previous year. This year’s field is, ahem, a bit larger than that.

Race management: For decades, the Boston Athletic Association consisted of just two people, Will Cloney and Jock Semple. Cloney’s name is at the bottom of the flyer, and the organization was run out of Semple’s training room at the Boston Garden (mentioned at the top). It wasn’t until the 60s or so that the marathon became a bigger deal than the B.A.A.’s indoor track meet at the Garden. Now deceased, Semple was the source of great stories about the early days of road racing in his 1981 autobiography, Just Call Me Jock.

I found a signed copy of Semple’s book at a local used bookstore for $3.95. As for the flyer above, I cannot recall exactly how it came to me. A co-worker had it and passed it along eleven years ago when I first qualified for Boston. Who gave it to him is long forgotten.

What hasn’t changed: British marathon times. Note that Ron Hill is credited with the then-course record of 2:10:30 in 1970. Hill managed that while working a full-time job, which was how most people did it in the amateur era. With all the benefits of modern science and all day to train and recover, probably no Brit besides Mo Farah could match that today. 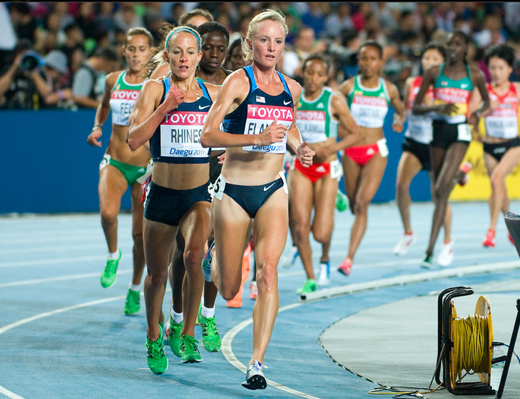