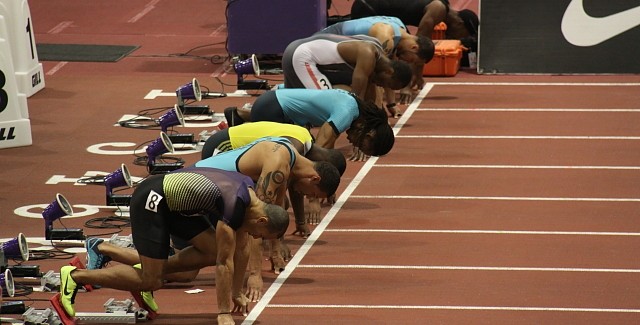 Yesterday’s Meeting Areva, the Paris stop on the Diamond League tour, had a lot of upsets and wild finishes. One race that did go according to form was the men’s 100 meters, where Asafa Powell won in the time of 9.81 seconds.

It led one fan to ask this question:

Of course that led to a follow-up question.

This is where my work comes in. Interestingly enough, my count for Asafa Powell’s career sub-10 races is slightly different than his.

Notes for the nerdy: My source is the deep and detailed lists at Alltime-Athletics.com, which breaks things down into a main list plus times that were considered to have a “rolling start” (e.g., a false start that wasn’t called), hand timing, en route to longer distance, and run with a faulty wind gauge. I included all of those sub-10.00 marks with automatic timing, plus three hand-timed 9.7 marks.

Most sub-10 races in a season

Most sub-10 races by nation

Most sub-10 races by venue

More reading
Jon Mulkeen has compiled the number of sub-10 sprinters for each of the last thirty seasons. This year is already the deepest.

Wikipedia has an entire entry dedicated to the 10-second barrier, including a list of all 105 men who have run 9.99 or better.