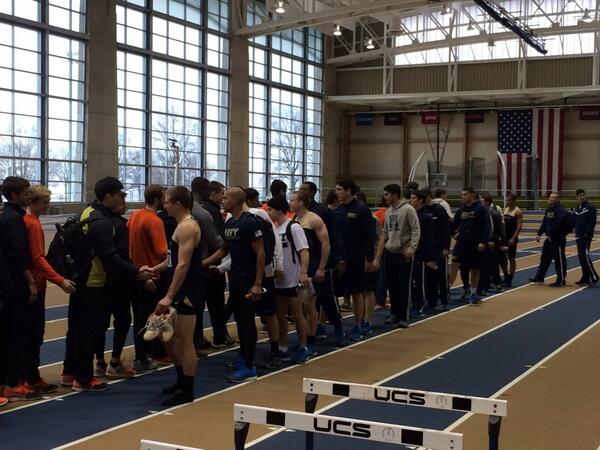 Some traditions should never die. Thanks Navy track for a great meet. –@Princetontrack (Photo by Princeton Track/XC twitter)

This will be brief, as there were just five meets held over the weekend.

This was the 43rd installment of a men’s-only dual meet series first held in 1958. Navy won for the second year in a row and now leads the series at 22 wins to 21 for Princeton.

“We talked yesterday in our team meeting about how we needed a team effort and how good Princeton was all-around, not just in one or two events,” Navy head coach Stephen Cooksey said after the meet. “…the bottom line was to focus on the competitor you are up against and beat them to grab the points and that’s what we accomplished today”.

The meet was mostly neck-and-neck, with the Midshipmen winning nine events to the Tigers’ eight. The real difference was off the track; Navy swept the top two spots in four of the six field events.

The most compelling race of the meet was the 3000 meters, where Princeton’s Chris Bendtsen kicked past Navy’s Stephen Schroeder for a narrow victory. The only double individual winner was Navy sophomore Jordan Sartor-Francis, who won both the 60 and 200 meters.

Does this meet have any predictive power? A bit. Princeton has been first or second at the indoor Heps (Ivy League) Championships for twenty years in a row, but in each of the last four years the Tigers won the Heps when they beat Navy and were runners-up when they didn’t. The “championship” that matters for Navy is the dual meet with Army, and a win or loss against Princeton was followed by the same result against Army over four of the last five years.

The star of the meet was Western Michigan’s Andrea Arnold, who won the 400 meters in a meet record time and anchored the winning 4×400 relay. Western Michigan has now won all nine editions of this women’s-only dual meet series, and only once has Toledo gone on to beat the Broncos at the MAC Indoor Championships.

This is the second year for Akron’s Pole Vault Convention, the rust-belt alternative to Reno’s Pole Vault Summit, which offers up competition and coaching clinics for all levels over its three days. Saturday night saw the elite competitions, matching up top collegians and a few pros.

Akron’s own Shawn Barber, still just 19 years old but already the Canadian record holder, was the top collegiate male. New pro Jack Whitt, the 2012 NCAA champ while at Oral Roberts, won with 5.61 meters (18′ 4¾”). Barber was second with a 5.50m (18′ ½”) clearance, beating pros Mark Hollis and Jake Winder on the countback.