It’s Day 7 at the US Olympic Trials in Eugene, Oregon. Here is your viewer’s guide to today’s action.

Before you get yourself acquainted with what is coming up today, you may want to check out our recap of yesterday’s action and last night’s House of Run mini-podcast.

There are five and a half* finals today: the women’s javelin, the men’s triple jump, 5000 meters, 200 meters, and 110 hurdles, and the first day of the *heptathlon.

As with the decathlon, the heptathlon requires following each event and comparing each athletes’ efforts against their expected results. For example, a good hurdler on a bad day may beat a bad hurdler on a good day, but the first has given up points and the second has gained. 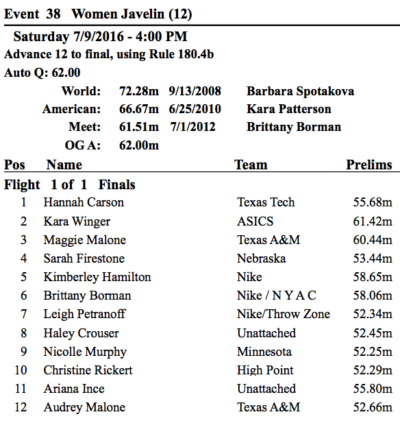 In a nutshell:
Only four Americans have thrown over 60 meters (196′ 10″) this year. Kara Winger (Asics) rates as the favorite given her status as a two-time Olympian and her performance in recent meets and the qualifying round. NCAA champion and collegiate record holder Maggie Malone (Texas A&M) and defending Trials champion Brittany Borman (Nike) have been throwing nearly as far as Winger and also rate as favorites to make the team. Hannah Carson (Texas Tech) is the one most likely to upend the apple cart.

Complicating factors: Rain could make for a slick runway and difficult conditions. The Olympic qualifying distance is 62.00 meters and Carson is the only athlete above who has not yet achieved it. 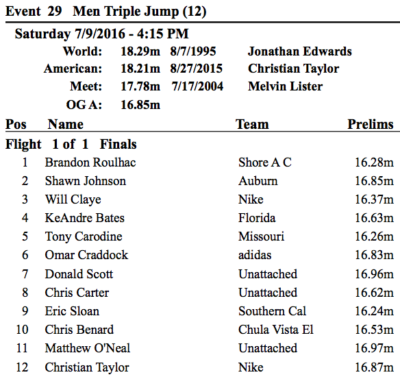 In a nutshell:
Christian Taylor (Nike) is the consensus #1 triple jumper in the world, so he should have no trouble finishing in the top three here.

Omar Craddock (adidas) was fourth at last year’s World Championships and is a pretty good bet for the second of three spots. Will Claye (Nike) is a proven competitor and had a great result at the Prefontaine Classic, and if he gets close to his potential then he’s in for sure.

There is a long list of guys who could make a run at the Olympic team if one of the above leaves the door open: Chris Carter, Chris Benard (Chula Vista Elite), Eric Sloan (USC), Donald Scott, and Matthew O’Neal (South Florida).

Complicating factors: the Olympic qualifying mark of 16.85 meters (55′ 3½”) is not going to be an issue since nine of the twelve finalists have achieved it. 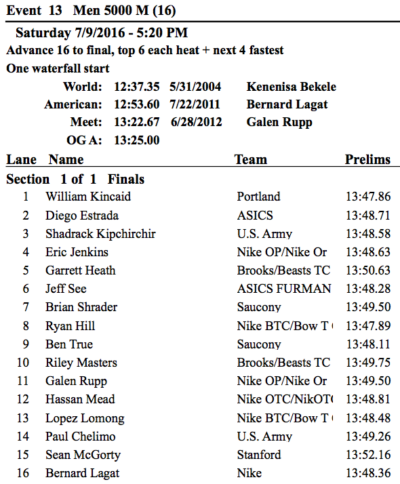 Ryan Hill (Nike/Bowerman TC) is probably the USA’s best 5k runner, and a Trials race (no paid pacemaker) plays to his strengths of a fast finish. He’s the clear favorite.

The rest of the field basically breaks down into two groups: the hard drivers and the big kickers. Bernard Lagat (Nike) may be on the downside of his career but no one is better at being in the right place at the right time, and his semifinal showed that he’s still got some wheels. Other big kickers include Paul Chelimo (US Army) and Eric Jenkins (Nike Oregon Project). The success of the US Army runners at these trials is remarkable and Chelimo could give them Olympians in four events.

The hard drivers include Galen Rupp (Nike Oregon Project), Ben True (Saucony), and Hassan Mead (Nike/Oregon TC). Of those three, Rupp has the reputation but True has the most success at 5000 meters. And given how badly Rupp was outkicked in the semifinals, he most definitely does not want to have to do that again.

Complicating factors: none, really. All of the major players have achieved the Olympic qualifying mark (13:25.00) and the weather is predicted to be cool and damp. 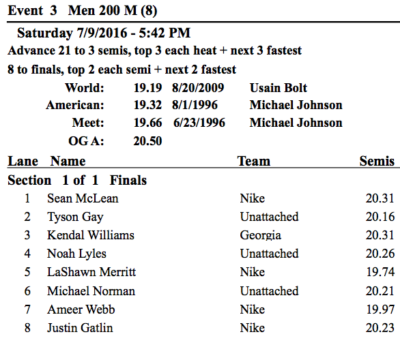 In a nutshell:
Going into the trials, Justin Gatlin (Nike) was widely seen as a clear favorite to win, and his victory in the 100 meters only strengthened that perception. His loss in yesterday’s semi to Ameer Webb (Nike) was his first loss to anyone not named Usain Bolt since 2013, but it was a semifinal and is probably meaningless.

What has happened to change this calculus is a very fast semifinal by 400 meter specialist LaShawn Merritt (Nike), the fastest of the year. It sets up an interesting battle, especially since Gatlin is stuck out in lane 8.

Webb is the next fastest of the finalists in the Olympic qualifying period and has proven himself on the Diamond League circuit. Tyson Gay didn’t run well in the 100 final or the 200 semis; the splash page on his website says “ONE LAST LAP” and this might be it.

The lion’s share of the attention will be given to the two high schoolers in the final, Noah Lyles and Mike Norman. It has been a very long time since a male high school sprinter earned a US Olympic berth and it’s a long shot here to be sure, but I’m telling you that there’s a chance. 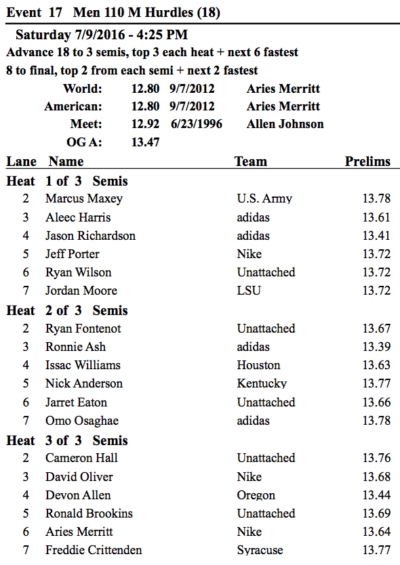 In a nutshell:
David Oliver (Nike) is the favorite, but after that it’s a wide-open affair.

Aries Merritt (Nike) is the feel-good story of many years in this sport, I for one hope he caps his comeback from a double kidney transplant with another Olympic run. The crowd will be behind Devon Allen (Oregon), who not only runs for their beloved Ducks but plays football for them too. Ronnie Ash (adidas) is running well and has some unfinished business to attend to. But honestly, anyone who can qualify to this final is capable of finishing in the top three.