It’s Day 6 at the US Olympic Trials in Eugene, Oregon. Here is your viewer’s guide to today’s action.

The meet is picking up speed for a weekend finale. There are just three finals today–the men’s discus and steeplechase and the women’s 100 hurdles–but there are crucial semifinals in five events. 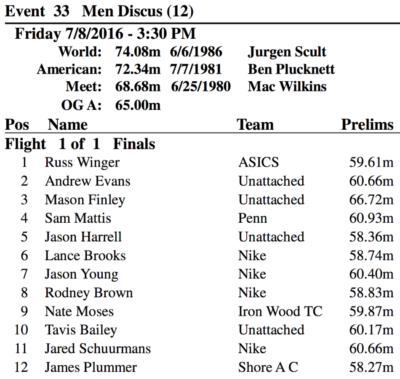 In a nutshell:
Some of the favorites, notably Rodney Brown (Nike) and Tavis Bailey, did not throw well in qualifying yesterday. Usually this is a very bad sign, but the circle was wet due to rain and that could be a mitigating factor. On the other hand, it may rain today as well.

One takeaway from yesterday’s qualifying is that Mason Finley is on form and should be considered a threat to win. Despite the rain and slick circle, he hit an Olympic qualifying mark of 66.72 meters (218′ 11″).

Brown and Bailey each have some international wins this year, albeit on the “B”-level World Challenge circuit, but still have to be considered among the favorites. Sam Mattis (Penn) hasn’t thrown well since early April due to the famous Daily Relay curse, but was second in yesterday’s qualifying. 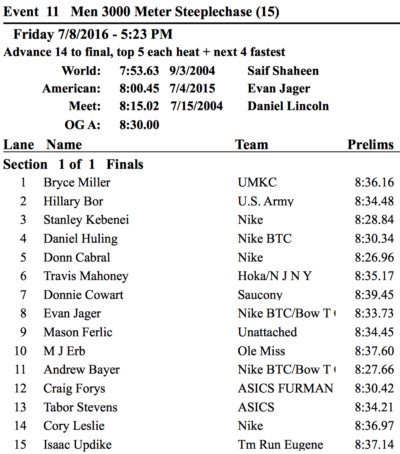 In a nutshell:
Evan Jager (Nike/Bowerman TC) is the four-time defending national champion and has all of the seven fastest times in US history. It would take an odd set of circumstances for him to lose. His teammate, Dan Huling, is a strong favorite for second since he actually beat Jager in the finals at last year’s World Championships.

Cabral has the fastest PR of the group and was second at last year’s US Championships but his lone steeplechase of 2016 wasn’t so good. Kebenei is a proven runner over his years at Arkansas, including winning last year’s NCAA title. Bayer is relatively new to the event and still learning, but has serious upside. Leslie has set PRs this year at both the steeplechase and the mile.

Complicating factors: The last two barriers sometimes separate the wheat from the chaff. The Olympic qualifying time of 8:30.00 is unlikely to come into play since nine of the twelve finalists have achieved it, and it’s probably going to take well under 8:20 just to be in the top three.

That said, Keni Harrison (adidas) appears head and shoulders above the rest. She has the four fastest times in the world this year, and breezed to an easy 12.57 in the heats, a time only two other women have beaten this year.

The next fastest, both in terms of the 2016 world list and yesterday’s heats, are Brianna Rollins (Nike) and Jasmin Stowers (Nike). But there are simply so many good Americans that anyone who makes the finals is more than capable of making the top three. Remember, at least two of the world’s top fifteen will not get into the final. That’s just nuts.

Complicating factors: Hurdles. Ten of ’em. In big pressure races like this, they often get in the way. The leader at the ninth hurdle can crash and burn on the tenth.