Tonight is hurdles night. Could Devon Allen be the new star?

Welcome to the fifth of our daily Olympic track and field viewer’s guides. We’re here to help you find out what, when, how, who and why to watch all of the action.

Things are always in flux, but these are what the current listings say. All times are Eastern.

You have plenty of other viewing options as well, mainly via the internet.

The IAAF’s live results page is awesome, bookmark it.
You also need our own Non-Track Fan’s Guides to the Olympics for men and women, even if you’re already a track fan.

Track and field competition schedules are best understood in a visual format since the sport is a sort of three-ring circus, with many things happening at once.

The basics are that competition begins at 8:30am (Eastern time) and goes until about noon.

The favorites: Christian Taylor (USA), Will Claye (USA), Dong Bin (China), Alexis Copello (Cuba)
Americans: Taylor, Claye, Chris Benard
Canadians: none
Bet worth taking: A Claye win pays 4:1.
Taylor is a huge favorite to win, and Claye is probably the next best in the field. The evening could be a bit of a Gator chomp, since both were teammates at Florida.

Qualifying format: The first three in each of six heats plus the next six fastest will go to the semifinals.
The favorites: Brianna Rollins (USA), Kristi Castlin (USA), Nia Ali (USA), Cindy Roleder (Germany), Alina Talay (Belarus), Tiffany Porter (Great Britain), Cindy Ofili (Great Britain)
Americans: Rollins, Castlin, Ali
Canadians: Phylicia George, Nikkita Holder, Angela Whyte
The USA is so strong in this event that the 6th-place finisher at the Olympic Trials recently broke the world record. If you want an outsider to pull for in the heats, Angela Whyte is your woman; this is her 16th year of competing at the international level.

The favorites: Sandra Perkovic (Croatia), Denia Caballero (Cuba), Julia Fischer (Germany), Dani Samuels (Australia), Nadine Müller (Germany)
Americans: none
Canadians: none
Bet worth taking: A Dani Samuels medal pays 5:2.
Perkovic is a strong favorite to win and at times throws distances not seen since the fall of the Eastern Block. 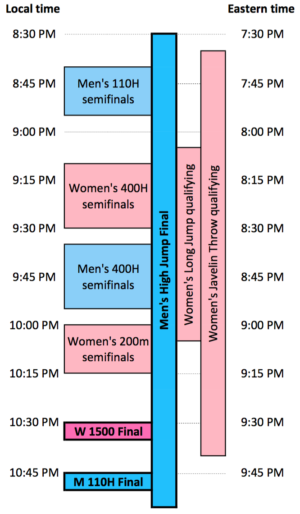 The favorites: Bogdan Bondarenko (Ukraine), Mutaz Essa Barshim (Qatar), Derek Drouin (Canada), Erik Kynard (USA), Guowei Zhang (China)
American: Kynard
Canadian: Drouin
Bet worth taking: Kynard pays 10:1 to win.
The vertical jumps are always a little hard to predict, but it certainly appears that the medals will come from the five favorites listed above. Barshim and Bondarenko have the most upside, but haven’t been clearing the same stunning heights this year that they did in 2014. Kynard used to be the most inconsistent of the top jumpers but retooled over the winter and is now one of the most consistent.

Qualifying format: The top two in each of three heats plus the next two fastest will go to the final, held later in the evening.
The favorites: Omar McLeod (Jamaica), Devon Allen (USA), Dimitri Bascou (France), Ronnie Ash (USA), Orlando Ortega (Spain), Pascal Martinot-Lagarde (France)
Americans: Allen, Ash, Jeff Porter
Canadians: Johnathan Cabral
Kevin Sully previewed this for us. The semis and the final are both tonight. McLeod has been the best of the year so far, but Allen is doing things no young hurdler has done since Skeets Nehemiah in the late 70s.

Qualifying format: The top two in each of three heats plus the next two fastest will go to the final.
The favorites: Dalilah Muhammad (USA), Sara Slott Petersen (Denmark), Eilidh Doyle (Great Britain), Zuzana Hejnová (Czech Republic), Ashley Spencer (USA), Sydney McLaughlin (USA)
Americans: Muhammad, Spencer, McLaughlin
Canadians: Noelle Montcalm, Sage Watson
17-year-old McLaughlin will be the center of attention, but she’ll have to run a lot better here than she did in last night’s heats in order to make the final.

The favorites: Genzebe Dibaba (Ethiopia), Faith Kipyegon (Kenya), Jenny Simpson (USA), Laura Muir (Great Britain), Sifan Hassan (Holland), Dawit Seyaum (Ethiopia)
Americans: Simpson, Shannon Rowbury
Canadians: none
Bet worth taking: A Simpson medal pays 14:1.
Kevin Sully previewed this for us. In short, Dibaba looks all but unbeatable. Expect the chattering classes to have something to say about this, and with good reason. After her, it’s still a middle-distance race which means to expect the unexpected.

This is another of the few events which conduct semis and finals in the same night. I’m not sure who that favors, if anyone.