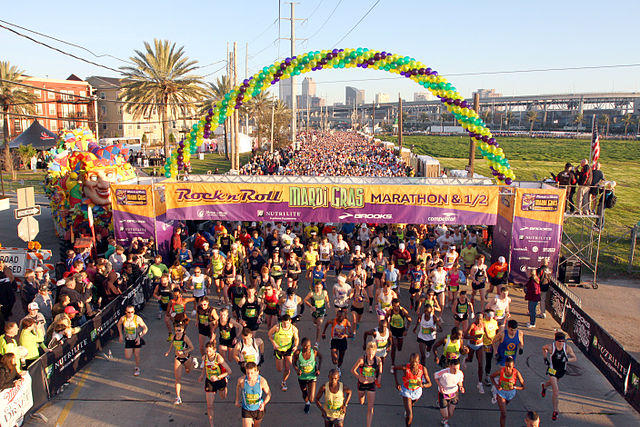 It’s been two weeks since Competitor Group, Inc., decided to withdraw its elite athlete support in its Rock N’ Roll race series. (I assume you’re well aware of what happened; if not, educate yourself here.) The shock waves are still reverberating through professional running even now, and two weeks is a long time in the sports news cycle. This turn of events is very bad for pro running in the short term but may end up helping in the long term. I’ve spent some time thinking about all of this and I’d like to share my thoughts.

Most reactions I’ve seen to CGI’s decision to pull the plug on paying travel and appearance fees to pro runners criticize the corporation for greed or shortsightedness or lack of support of the running community or the cities that host the races. These are all valid criticisms.

For example, Let’s Run pointed out the tax breaks and other public funding that cities give CGI in exchange for bringing a RNR race. CGI may not necessarily lose out much by failing to have newsworthy names involved in a race, but the host city gave CGI those incentives in part to give their Convention and Visitor’s Bureau some free national advertising–which the CVB now isn’t going to get. There are many other ways in which CGI has now shortchanged the races and communities that support them.

First of all, no one should be surprised by this. CGI is a corporation, and seeking profit regardless of the collateral damage is what corporations do. Corporations are bound by law to maximize profits, and shareholders have the right to sue if the corporation is not attempting to do just that. The needs of the shareholders aren’t the most important thing, they’re the only thing. If paying travel and appearance fees to pro runners was more of a liability than an asset to CGI, then of course they got rid of it. Not because decision-makers wanted to, but because they had to.

I am not of the opinion that this cold calculation is why CGI discontinued its elite athlete support, though. If it were, CGI would have made this move long ago. I think they did it because CGI is experiencing financial difficulty, possibly of a severe nature.

Let’s go all the way back to February and look at a Runner’s World news story titled Has the Marathon Boom Peaked? There, Scott Douglas referred to an industry newsletter which stated:

The data which suggested that marathon/half marathon participation was in decline came solely from ten of CGI’s Rock N’ Roll races. These ten races were by no means representative of long-distance racing as a whole (Running USA’s comprehensive annual survey data had yet to be release). This is what statisticians refer to as a “convenience sample”, which can be highly skewed.

One need only look at the comments section of that article (which appears to have been deleted, but click here for a summary) to find out why this sample was skewed. The commenters had run CGI races and hated them because they got significantly less support and service for their entry fee than in other big races. They all thought CGI’s numbers were down not because a fad had passed but because CGI offered an inferior product at an inflated price.

Sure enough, Running USA’s data released in March disagreed with the RW story. It showed small growth in marathon participation from 2011 to 2012, despite tens of thousands who missed out on the canceled NYC Marathon, and robust growth in the half marathon. Overall numbers were unquestionably up, but Rock N’ Roll numbers were down. The only reasonable conclusion to draw? People still want to run long races, just not CGI’s races.

In light of this evidence, CGI’s rather abrupt move to cut elite athlete support doesn’t reek of greed so much as panic. More proof: in the following days, CGI announced the cancelation of half marathons in Pasadena, California, and St. Petersburg, Florida. Both races had sharp declines in participation from 2012 to 2013. True to past Rock N’ Roll race criticisms, runners in these two complained about getting fleeced with $15 parking charges both at packet pick-up and on race day.

Is Competitor Group losing money? I don’t know. But they sure look like they are. Numbers are down. They’ve canceled races and cut expenses. A bad reputation among rank-and-file participants has been growing for years, and now the more competitive runners are pissed off too. Let’s just say the future doesn’t look bright.

Where To Go From Here?

There was (and still is) widespread shock at the CGI decision in the pro running community. In a way, I think this is a good thing, but only because it happened so suddenly. Professional running has been the proverbial frog content to sit in a pot of slowly boiling water, but this time we’ve been dropped straight in and jumped out.

Many opinion pieces around the web offered up constructive reactions. I’ll single out three for special attention since they come from people who know the sport well: announcer/writer Toni Reavis, race director/coach/businessman Ben Rosario, and coach Steve Magness.

All have a common theme, borrowed from Ben Franklin: we must all hang together or we will certainly all hang separately. US road races and athletes must work in concert to publicize a comprehensive national circuit. Right now we have a bunch of stand-alone races, none working in cooperation with each other. And no one should look to USATF to do this for them, because it’s not what the organization is designed to do.

Other points: Race directors should stop caring about fast times and start caring about matchups and competition. Athletes must promote themselves as racers and personalities, because just being fast won’t cut it in a crowded professional sports marketplace. In other words, we all have to take responsibility for making our sport into something that people want to follow. I would add that in a sport which depends almost completely on sponsorship, athletes must be celebrities as much as champions (see: Jones, Lolo and Symmonds, Nick).

Yet another thing I see that road racing (and track and field as well) must do is know its strength. After decades of struggle, soccer has finally become a real spectator sport in the United States because it has figured out how to sell soccer’s strength. That strength is tribalism, or belongingness to a group. Being a fan of a club or a national team (and usually both) means being one of the throng. Distance running doesn’t do this very well. Our strength is the power of inspiration, showing ordinary people doing extraordinary things. We need to use our Matt Elliots, our Desi Davilas, our Mack Chaffees.

But will any changes actually take place? Will people in an inherently individual sport learn to work together? Meet directors could look at CGI’s exit from elite racing less as a tragedy and more as eliminating the competition. Athletes who compete against each other for scarce resources might not be willing to work together for the good of all. We shall see.

There is, however, a growing realization that there’s gotta be a change, things just can’t stay the same.