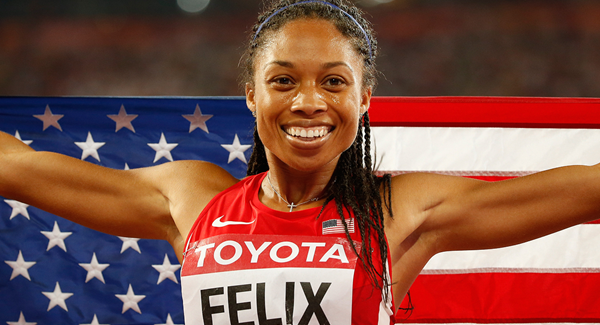 Allyson Felix is the biggest star of the day, but there’s a whole lot more to watch too.

Welcome to the fourth of our daily Olympic track and field viewer’s guides. We’re here to help you find out what, when, how, who and why to watch all of the action.

You have plenty of other viewing options as well, mainly via the internet.

The IAAF’s live results page is awesome, bookmark it.
You also need our own Non-Track Fan’s Guides to the Olympics for men and women, even if you’re already a track fan.

Track and field competition schedules are best understood in a visual format since the sport is a sort of three-ring circus, with many things happening at once.

The basics are that competition begins at 8:30am (Eastern time) and goes until about 11:20.

The favorites: Anita Wlodarczyk (Poland), Zheng Wang (China), Wenxiu Zhang (China), Betty Heidler (Germany)
Americans: Amber Campbell, DeAnna Price
Canadians: none
Bet worth taking: Campbell is 7:1 to medal.
How big a favorite is Wlodarczyk? Most British betting houses give her 1:33 odds to win, meaning you must bet $33 to win $1. Campbell and Price are the first US Olympic finalists in this event in 16 years, and no Americans have ever finished better than seventh.

The favorites: Hyvin Jepkemoi (Kenya), Ruth Chebet (Bahrain), Habiba Ghribi (Tunisia), Emma Coburn (USA), Sofia Assefa (Ethiopia)
Americans: Coburn, Courtney Frerichs, Colleeen Quigley
Canadian: Geneviève Lalonde
Kevin Sully previewed this for us. The basics are that Jepkemoi and Chebet threatened the world record while nearly running to a dead heat earlier this year, and Coburn is in the hunt for a medal. 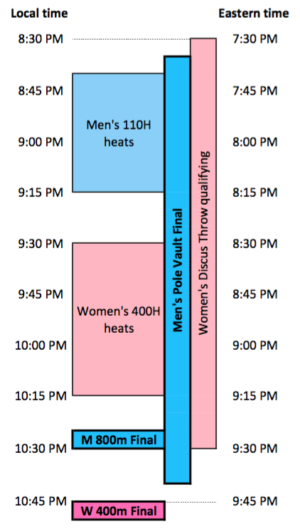 The favorites: David Rudisha (Kenya), Alfred Kipketer (Kenya), Taoufik Makhloufi (Algeria), Boris Berian (USA), Pierre-Ambroise Bosse (France)
Americans: Berian, Clayton Murphy
Canadians: none
Bet worth taking: Murphy pays 7:1 to medal.
Kevin Sully previewed this for us. In a nutshell, the 800 is the least predictable of all the flat running events. That’s why I listed five of the eight finalists as “favorites”. Rudisha is still the man to beat but he won’t produce a Secretariat-like run like he did in 2012. The USA has two young, smart and talented runners in Berian and Murphy and you never really know what either of them could do.